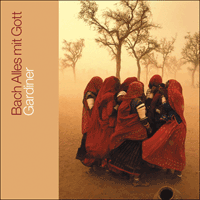 My God, it looks like Bach!
Michael Maul on a sensational discovery
Since 2002 I have been involved in a project funded by the Leipzig Bach-Archiv and the Ständige Konferenz Mitteldeutsche Barockmusik, travelling back and forth across central Germany to search archives and libraries for documentary material relating to the music history of the Baroque period—documents accompanying the construction of new organs, testimony on issues of performance practice, letters by famous musicians and so on. The Bach-Archiv was of course particularly interested in new documents by and about Johann Sebastian Bach.

Some of the results are presented in the most recent issues of the Bach-Jahrbuch: in the small Thuringian town of Ronneburg, the local cantor Johann Wilhelm Koch turned out to be the owner of the largest Bachiana collection assembled during Bach’s lifetime, while postage receipts and other supporting material now allow us detailed insights into the practice of exchanging repertoires common amongst Bach’s circle of colleagues and friends. And for the year 1755 the performance of a large portion of Bach’s chorale cantata cycle at Leipzig can now be documented. Nobody dared hope, however, that this search might also yield unknown works by Bach. In fact I tended at first to avoid the proper ‘Bach towns’ Arnstadt, Mühlhausen, Weimar, Köthen and Leipzig, assuming that in these places generations of Bach scholars had searched so thoroughly that significant discoveries could not seriously be hoped for.

However, about half a year ago I turned my attention to Bach’s years at Weimar, concentrating especially on the history of municipal rather than courtly music making, a field that had not yet been much investigated. Quite accidentally I also became aware of a previously neglected source of life at court during Bach’s time. The famous Duchess Anna Amalia Library, best known for its collection of German classical literature around Schiller and Goethe, and partly destroyed by a devastating fire in 2004, also holds a large print collection of occasional writings from the early eighteenth century. Most of these are congratulatory poems to celebrate the Duke’s birthday or name-day, written by high-ranking administrators and theologians active in the Duchy of Saxe-Weimar. Among them I also found a number of printed texts of congratulatory cantatas written by the consistorial secretary and court poet Salomo Franck, who frequently worked as a librettist for Bach. Franck’s texts caught my attention, for as their dates coincided with Bach’s period as court organist (1708-1714) and Konzertmeister (1714-1717) at Weimar, Bach himself would have been a potential candidate to set them to music. I thought it might be possible to find textual parallels in Bach’s surviving cantatas to serve as clues for lost settings of texts by Franck.

The crucial factor turned out to be my decision not to proceed by ordering from the catalogue individual items that looked promising, but to gain permission to examine the complete holdings of about 800 prints. For it is seldom possible to decide from the titles alone whether a booklet contains just a poem, a libretto for a cantata or serenade, or indeed some other kind of congratulatory writing. On May 17 I had already spent nearly ten hours inspecting the large boxes containing the printed occasional texts when I came across what looked like a rather uninteresting birthday poem for Bach’s patron, Duke Wilhelm Ernst of Saxe-Weimar, dating from 1713. Its elaborate title begins: Des Durchlauchtigsten Fürsten und Herrn, Herrn Wilhelm Ernsts, Herzogs zu Sachsen […], Christ-Fürstlicher Wahl-Spruch oder Symbolum, Omnia cum Deo, & nihil sine eo. Alles mit GOTT und nichts ohn Ihn. This is followed by a poem in twelve stanzas by Johann Anton Mylius, at that time super intendent of Buttstädt, a small town situated about fifteen miles north of Weimar. With this poem Mylius on the occasion of his sovereign’s 52nd birthday presented Duke Wilhelm Ernst of Saxe-Weimar with a versified meditation of his motto ‘Omnia cum Deo et nihil sine eo’ (‘All things with God, and naught without Him’), which in its German equivalent ('Alles mit Gott und nichts ohn’ ihn') opens and closes each stanza. As I looked through the document I realised that, surprisingly, the last two pages had originally been left blank until someone had inserted by hand the musical setting of the poem—an Aria Soprano Solo è Ritornello—, without however providing the name of the composer. I couldn’t believe my eyes, for the elegantly curved soprano clef immediately looked familiar—in fact it looked like Bach!

I tried to be realistic. The Mylius family, a large clan spread all over Thuringia, counted a number of respected musicians among its members. Thus in the seventeenth century there was a Samuel Mylius living as cantor in Buttstädt; he later moved to the residency of Merseburg, where he held a similar position until 1710. In Gotha the renowned capellmeister Wolfgang Christian Mylius had died only a few months before, and elsewhere in this musically extraordinary region members of the family held musical offices. Wouldn’t the Buttstädt superintendent rather have asked one of them to set his poem to music, which he then would have per formed on the Duke’s birthday before presenting him with a dedicatory copy? Why would he have asked Johann Sebastian Bach, who in 1713 was employed as court organist, gaining experience as a composer of vocal music only after his promotion to Konzert meister in 1714? Wouldn’t the two court kapellmeisters Drese have been more likely candidates for such a commission?

And yet it looked like Bach! I rushed to the music reference section of the library to find illustrations of Bach’s handwriting that would either dispel or confirm this idea. The library was about to close, and since I couldn’t immediately find any conclusive evidence, I quickly ordered photographic reproductions of the source. After all, back in Leipzig I had the most com prehensive collection of Bach sources at my disposal in the library of the Bach-Archiv. There I would be able to check my hypothesis with the necessary thoroughness.

The next few days seemed endless. The idea haunted me constantly, and my colleague, teacher, and friend Peter Wollny—an authority on Bach’s handwriting—had to listen for hours to my theory, without of course being able to help as I as yet had nothing to show. We expected the reproductions from Weimar any day. Finally on June 1 the envelope arrived. ‘Open it!’, Peter said, and then: ‘Spot on. This is the most important source discovery in decades.’ That evening we opened a bottle of champagne, and the next day we decided together with my academic advisor Christoph Wolff to announce the discovery during a press conference on June 7. Since then the phones have not stopped ringing: everybody wants to perform or to hear the aria.

And here it is! This world premiere recording permits us to listen to a hitherto completely unknown vocal work by Bach. There has been nothing like this for a long time. There is of course no performance or reception history yet; in a way this is a ‘newly-born’ piece. And the well-known Schmieder catalogue of Bach’s works (Bach-Werke-Verzeichnis) can add a new entry: BWV1127.

A few remarks on the piece itself. By arranging his poem in twelve stanzas Mylius also determined the formal structure of the musical setting. Rather than writing a simple strophic aria with a short ritornello, however Bach, in his only contribution to this genre, created a mixture between a strophic and a da capo aria. Structurally the piece resembles the aria ‘Weil die wollenreichen Herden’ from the Hunting Cantata BWV208, also composed in 1713; in both cases, the actual aria is accompanied by continuo alone, and only the ritornello separating the individual stanzas is scored for two violins, viola and continuo. The expression of the birthday aria is completely different, however, not only because of its slow tempo (adagio). Particularly striking is the melodic beauty of the vocal line. After hearing the initial motto ‘Alles mit Gott’ only once one can hardly forget it—a claim that certainly cannot be made for every Bach theme.

With its disciplined and typically ‘Bachian’ counter point the aria certainly ranks with the known Weimar compositions. The string ritornello in particular is impressively fashioned—its close imitations are clearly derived from techniques familiar from the Orgelbüchlein, an anthology of chorale settings originating at least in part from the same time. And the idea of skilfully elaborating, extending and developing the main theme of the actual aria in the ritornello makes this ‘occasional work’ a highlight of the entire genre.

It would be interesting to know how many of the stanzas were actually performed in 1713. In his autograph Bach underlaid only the first stanza, probably because he had no more space at his disposal. On this recording, three are performed, but a number of observations suggest that during the birthday celebrations at the Weimar court chapel—the ‘Himmelsburg’ (‘celestial castle’)—all twelve stanzas were presented. We can safely assume that the superintendent as the inaugurator of the work certainly would have wanted to hear his meditations on the ducal motto in their entirety, particularly since they were rich with biblical allusions carefully annotated in the printed text. Besides, there are a number of hidden references that can only be identified when looking at the complete poem. For example, in all twelve stanzas the motto is kept unchanged as the first line, and while the middle section (beginning with line 3) varies from stanza to stanza, in the second line only the third word is altered. Thus in the first stanza the second line reads ‘Wird Ein=Her Wunder=Segen Ziehn’, while in the second we find ‘Wird Ein=Her Jesus Segen Ziehn’, and so on. Taken together, the twelve first letters of this third word (i.e. the fourth syllable) in all the second lines read as an acrostic of the dedicatee’s name: WJLHELM ERNST (this also explains why Mylius wrote twelve stanzas). At the same time, when read symmetrically three from the one and three from the other end, the six first letters of the words in the second line of the first stanza can be interpreted as ‘Wilhelm Ernst Herzog Zu Sachsen Weimar’. Bach appears to have been impressed by the librettist’s playfulness and we may assume that by using exactly 52 notes for his introductory continuo prelude he intended to present an audible allusion to the 52 years that the Duke had already completed, before the soprano entered with congratulations for the 53rd.

In its very first stanza the text speaks of a ‘Wundersegen’—a ‘miraculous blessing’. It must have been guarding Bach’s aria as well. After its performance in 1713 the manuscript was preserved among the holdings of the ducal library, where it remained undisturbed for almost 300 years—certainly one of the least ‘travelled’ of Bach’s autographs. But this wonderful piece would most certainly have fallen victim to the devastating fire last year if the manuscript had been stored at its proper place. By an extraordinarily lucky coincidence the chief restorer of the library, Matthias Hageböck, had developed a special interest in the Weimar collection of occasional poetry, as the dedicatory prints and manuscripts are bound in precious brocade papers, an almost unique feature in early eighteenth-century German book-making. In order to prepare a catalogue of these bindings Hageböck had stored the boxes containing the poems in his workshop shortly before the fire broke out. It is due to this ‘miraculous blessing’ that, seventy years after the discovery of Bach’s cantata fragment Bekennen will ich seinen Namen, BWV200, we are now once again confronted with a new vocal work by Bach. May it not be the last one!