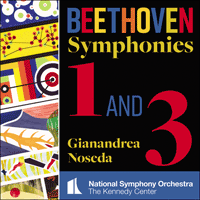 Fine performances of two of Beethoven's pioneering early symphonies—No 1 from 1800, and the epic 'Eroica' completed just a few years later.

Symphony No 1 in C major Op 21 (1800)
The energy with which the 22-year-old Beethoven threw himself into Viennese music life was truly astounding. As he was leaving his native Bonn for Vienna in 1792, one of his patrons, Count Waldstein, inscribed the following in the young man’s book of souvenirs: 'With the help of assiduous labor you shall receive Mozart’s spirit from Haydn’s hands.' Thus, Waldstein became the first person to mention Haydn, Mozart, and Beethoven in the same breath. The prophecy came true: Beethoven soon became the most talked-about musician in the imperial capital, equally famous as a composer and a pianist, courted by the aristocracy and admired by the public.

Beethoven’s first 20 opus numbers, published between 1795 and 1801, cover just about every current genre of instrumental music: two piano concertos, sonatas for solo piano, for violin and piano, for cello and piano, string trios, piano trios, string quartets, quintets, as well as the Septet in E flat which became the most popular of all his works. One significant type of music was still missing from this list, however, and Beethoven knew he couldn’t fully be an heir of Haydn and Mozart until he had written a symphony.

There is certainly plenty of Haydn and Mozart in Beethoven’s first symphony, finished a few months after his 29th birthday. But the young composer’s originality is evident in every bar. Beethoven clearly took over where Haydn and Mozart had left off; and if he remained within the Classical symphonic framework established by his elders (something he would never do again in a symphony), he spoke the inherited language in such an individual way that no contemporary could fail to notice the arrival of a major new voice on the musical scene.

The first symphony was introduced at the Court Theatre on 2 April 1800. The program was made up entirely of works by Haydn, Mozart, and Beethoven; this was the first time the composers now known as the three Viennese classics appeared together on a concert bill.

Right at the beginning of his symphony, the indomitable young man made a gesture that has been cited ever since as a sign of artistic independence. The very first chord of the symphony is one that, instead of establishing the home key as one would expect, immediately destabilizes it and leads away from it. This opening sets the stage for a brilliant movement filled with many more musical surprises.

The second movement, in a gently rocking rhythm, grows from unaccompanied violins to a full orchestral sound. Haydn and Mozart often left out the trumpets and kettledrums from their slow movements (although there are significant exceptions!). Beethoven chose to retain them here, but asked them something they were not often required to do, namely to play softly. The pianissimo (extremely soft) notes of the trumpets and timpani add a special element of mystery to this music.

The third movement is called 'Menuetto' but it is much too fast to be a dance. It is more like a Scherzo (the word means 'joke'); in other words, it is one of those witty, humorous fast movements that already appear in Haydn but acquired a special significance for Beethoven from his earliest Viennese works on. Beethoven liked to base his scherzos on single musical gestures, often consisting of only two or three notes; the treatment of these gestures was full of surprises, sudden key changes, offbeat accents, and other unexpected events. This delightful movement is no exception. Scherzos also have contrasting sections called Trios, as do minuets. In the Trio of Beethoven’s first symphony, the harmonies change remarkably slowly; this relative calm contrasts markedly with the hectic pace of the main section.

The last movement starts with another delicious Beethovenian joke. The theme of the movement, which starts with a fast upward scale, is born gradually before our eyes (or ears), as the notes of the scale are added, one after the other, in a solemn slow tempo. Once the top note of the scale has been reached, the tempo becomes lively, and there is never a moment of rest until the end.

Symphony No 3 in E flat major 'Eroica' Op 55 (1802-1804)
Beethoven’s third symphony represents a quantum leap within the composer’s oeuvre as it does in the history of music in general. The sheer size of the work—almost twice the length of the average 18th-century symphony—was a novelty, to say nothing of what amounted to a true revolution in musical technique and, even more importantly, in musical expression.

Music had never before expressed the idea of struggle in such a striking way. Beethoven’s encroaching deafness is surely part of the reason why that idea took center stage in the composer’s thinking at the time, and it is fair to assume that his physical affliction was behind the spectacular change that Beethoven’s style underwent in what has come to be called his 'heroic' period. Yet in the case of the third symphony, the personal crisis was compounded by the dramatic political events of the day, and in particular by Beethoven’s ambivalent relationship with the leading political figure of era—Napoleon Bonaparte.

Beethoven was at the impressionable age of 19 when the French Revolution broke out, and his letters from the 1790s attest his support of the republican cause. Like many intellectuals of his time, he was fascinated by the reforms Napoleon introduced as First Consul. At the same time, he despised tyranny in all its forms, and when Napoleon crowned himself Emperor, he felt that the revolution had been betrayed. He had planned to dedicate his new symphony to Bonaparte, but, according to the well-known story, he flew into a wild rage when he heard the news of the coronation. He tore up the title page, replacing the dedication with a new inscription that was more impersonal but also more universal: 'Sinfonia Eroica, composta per festeggiare il Sovvenire di un ‘grand Uomo' ('Heroic Symphony, composed to celebrate the memory of a great man').

The third symphony proceeds from intense drama to the final victory. The opening Allegro con brio is Beethoven’s longest symphony movement aside from the finale of the ninth. In it, some of the basic procedures of Classical sonata form (presentation and transformation of themes; traversal of various keys before a return to the initial tonality) are carried to a point where they take on an entirely new meaning: they become elements of a drama of unprecedented intensity. The themes are shorter than in most earlier symphonies and more open-ended, lending themselves particularly well to modifications of various sorts. It is by transforming, dismembering and reintegrating his motifs that Beethoven expresses the idea of struggle that is so unmistakably present throughout this movement.

The second movement bears the title 'Marcia funebre' ('Funeral March'). The music begins softly and rises to a powerful, dramatic climax. After some extensive contrapuntal development in the middle of the movement, the main theme’s final return is interrupted by rests after every three or four notes, as if the violins were so overcome by grief that they could barely play the melody.

In the third and fourth movements, Beethoven managed to ease the feeling of tragedy without letting the tension subside. The third-movement Scherzo begins with two notes repeated in an undertone that evolve into a theme only gradually. In the somewhat more relaxed Trio, the three horns take center stage.

The main theme of the last movement appears in no fewer than four of Beethoven’s compositions. We first hear it in a simple contra-dance for orchestra, then in the last movement of the ballet The Creatures of Prometheus (both in 1800-01), followed by the Variations for Piano, Op 35 (1802), and lastly, in the third symphony. The elaborate set of variations in the 'Eroica' finale are integrated into a single, continuous musical form. There is a minor-key variation with a distinct Hungarian flavor, and another one that turns the contradance theme into a slow aria. An enormous crescendo leads to the short Presto section that ends the symphony.