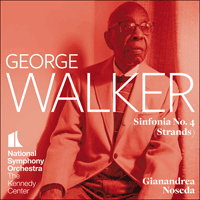 In January 2022, the National Symphony Orchestra and Music Director Gianandrea Noseda began performing and recording the complete cycle of George Walker’s five sinfonias. Remembering and honouring the music of George Walker is particularly special for the National Symphony Orchestra given the mutual connection to Washington DC, and the orchestra’s unique history of collaboration and commissions.

George Walker celebrated the year of his ninetieth birthday with the premiere of a brand new work, Sinfonia No 4 ('Strands'). The commission came from a consortium of orchestras, including the National, Cincinnati, New Jersey and Pittsburgh Symphony Orchestras, with a grant from Meet the Composer, and was premiered by the New Jersey Symphony in March 2012 under the direction of Jacques Lacombe.

The subtitle refers to the 'strands' from two spirituals—There is a Balm in Gilead and Roll, Jordan, Roll—that the composer wove into the fabric of his composition. Walker’s use of these quotes is rather subtle and somewhat reminiscent of the way Charles Ives worked with church hymns in many of his works: the melodies are fragmented, transformed, and hinted at more than presented in full. Their 'strands' are integrated into a rhythmically vibrant and colorfully orchestrated one-movement work, projecting high energy and constant excitement.

Commenting on his piece, Walker offered the following pointers:

The Sinfonia begins with an introduction that consists of several sections before the principal theme is stated. This theme recurs several times. The quotation of the first spiritual provides a pensive relief from the proclamatory nature of the theme that precedes it.

The briefer snippet of the second spiritual is affirmative. The following section consists of a melodic bass line over which fragmented interjections are superimposed. A similar section recurs, combining with the opening phrase of the second spiritual played by the piano during the course of the work. The bass material appears briefly in the coda.