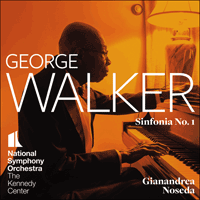 'I’ve always thought in universal terms, not just what is Black, or what is American, but simply what has quality', George Walker said in an interview on the occasion of his 90th birthday in 2012. British critic Tom Service, writing in The Guardian in 2015, cited Hindemith and Stravinsky as two of Walker’s 'musical heroes', but stressed that the American composer 'has created a distinctive world that is modernist and multifaceted yet richly communicative'.

This distinguished composer, pianist, and educator, who won the Pulitzer Prize for his orchestral song cycle Lilacs in 1996, published a fascinating memoir in which he recounted a lifetime of successes and honors and also spoke quite frankly about his musical likes and dislikes. He had studied piano with Rudolf Serkin and composition with Samuel Barber’s teacher Rosario Scalero at the Curtis Institute in Philadelphia, and first made his name with the often performed Lyric for Strings, a creative response to Barber’s Adagio for Strings. As a composer, he always remained true to his classical roots and built an oeuvre of symphonic and chamber works that earned him the esteem not only of the profession but of a wide audience as well.

Between 1984 and 2016, Walker composed five sinfonias. The first of these, commissioned by the Fromm Foundation, was premiered by the Berkshire Music Center Orchestra under Gunther Schuller at Tanglewood on 1 August 1984. It is a compact work in two movements, in which moments of great energy and powerful outbursts alternate with calm, lyrical sections. There are massive, block-like chords for the brass and wild percussion passages, but also sensitive violin solos and agitated outbursts for the clarinet and the flute, among others. In turn dramatic and tender, the work covers a lot of emotional ground in just over 10 minutes, and ends with a climactic statement for the entire orchestra.