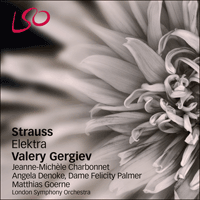 The one-act opera Elektra, containing one of the most demanding soprano roles in the repertoire, is based on the ancient Greek myth as retold by Hugo von Hofmannsthal. The work focuses on the relationships between Elektra, Chrysothemis, and their mother Klytamnestra, and the themes of love, hate and revenge. The drama's raw emotions are exquisitely expressed in some of Strauss' finest music. 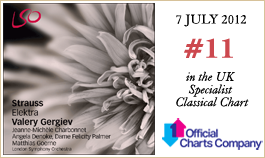 'Valery Gergiev was clearly born to conduct Elektra, and not just because of his trademark animal energy. Whatever the technical complexity behind the score, Gergiev has the LSO sailing through metre- and key-changes with almost effortless fluidity, and Strauss’s dramaturgical acumen has never seemed clearer' (Gramophone)
'Gergiev, with the LSO in fine form … conveys passions and tensions with compelling, sometimes deafening power' (BBC Music Magazine)

'A thrilling, often revelatory performance, alive to every intense and modernistic gesture. Valery Gergiev finds both great colour and emotional depth in the music … the London Symphony Orchestra on superb form … first-class sound and presentation' (Time Out)

Though it sounds apocryphal, here’s a true story. Around the time of the UK premiere of Elektra at Covent Garden in 1910, the Band of the Grenadier Guards played a selection from the new opera in one of their regular stints in the courtyard of Buckingham Palace. Listening upstairs, King George V sent down a note via a page to Bandmaster Williams. It read: ‘His Majesty does not know what the band has just played, but it is never to be played again’.

Despite this royal prohibition, the opera became a modern classic, and indeed remains a classic of modernism. It is perhaps hard for listeners now to understand just how modern it sounded to audiences, and even seasoned performers, in the years of its novelty. The renowned German contralto Ernestine Schumann-Heink sang the role of Clytemnestra in the very first performance of Strauss’s opera, given in Dresden in 1909 – but just the once. She refused to sing it ever again. ‘We were a set of mad women’, she later said of herself, her colleagues and the roles they had to embody.

Ironically, Strauss got it in the neck both ways, firstly from conservative listeners at the time for the disruptive coarseness and violence of his score, then later from those on the modernist wing who berated him for reneging on his progressive impulses in his subsequent scores, from Der Rosenkavalier (1911) onwards; though to be fair, his later operas are just as original in other ways, despite being written in a far more traditional harmonic idiom. Elektra remains, however, not only the most advanced large-scale score performed up till then – at that time Stravinsky’s The Rite of Spring was four years away and Schoenberg’s contemporary Erwartung fifteen from its first performance – but also Strauss’s farthest reach into a territory he would leave others to explore more fully.

He wrote it like that, of course, because the subject matter demanded it; later on he would interest himself in different subjects, which required different musical treatments. No one has ever suggested that Strauss’s modernism here is in any way inappropriate, nor, indeed, untimely.

Strauss had entered upon similar terrain already, in the strikingly different Salome, drawn from Oscar Wilde’s play (itself banned at the time in the UK by the Lord Chamberlain). Produced in Dresden three years earlier than Elektra, Salome actually sounds very different – Strauss defined its colour-scheme as ‘purple and violet’, as compared with Elektra’s ‘night and light, or black and bright’ – but nevertheless also charted new and strikingly original harmonic and orchestral territory as a means of exploring psychological and sexual states hitherto kept discreetly off the stage, if acknowledged at all. The differences between Salome and Elektra are ultimately far greater than their similarities, but the second opera can be said to continue along a path that Salome opened up. Both horrified their original audiences as well as exciting them. In good performances, both still do.

But there was far more than a cynical desire to cause a high-profile scandal in Strauss’s attention to such subjects; just as the scores themselves are anything but mere collections of musical shock-tactics. Both works, where appropriate, are intensely lyrical. And both represent highly personal artistic reactions to ideas and images that were current at the time.

In Salome, Strauss himself cut down the libretto from a German translation of Oscar Wilde’s play by Hedwig Lachmann; he had seen the play in Berlin in 1903 and become fascinated by it. In the case of Elektra, he worked from a version of the ancient drama by Sophocles made by the distinguished Austrian writer Hugo von Hofmannsthal. So pleased were both he and Hofmannsthal with the artistic results that the two then entered upon an artistic collaboration on a total of five further operas that ended only with Hofmannsthal’s sudden death in 1929.

Sophocles’s play, of course, was very ancient, dating from the 5th century BC. Hofmannsthal’s version is an adaptation, not a straightforward translation. It was first performed in Berlin in 1903. Strauss saw it almost immediately. The Viennese Hofmannsthal moved in highly sophisticated artistic and intellectual circles, and would have been well aware of the writings and ideas of Sigmund Freud, which arguably had an impact on his writing. Certainly the complex of emotions surrounding Elektra and her relationship to her dead father, her mother, sister and brother, and indeed the entire interactions of this supremely dysfunctional family as described in the ancient myths that have been retold countless times in countless ways throughout history, offered wonderful psychological potential for Freud and his followers to explore. One of them, Carl Gustav Jung, first defined what he called the ‘Electra complex’ in 1913; Freud preferred to refer to the concept of a ‘feminine Oedipus attitude’.

In his musical exploration of the original of this syndrome, Strauss was bound to extend his own (and indeed everyone’s) musical boundaries. He does so by utilising a new level of harmonic dissonance, often unresolved, that contrasts vividly with the lyrical and harmonically more regular passages associated with the opera’s more static or tranquil (relatively speaking!) moments. Elektra’s more ‘normal’ sister, Chrysothemis, inspires many of these. Allied to this harmonic disruption are the dislocations of rhythm and texture that break up the continuity of the score, either on a long-term or moment-by-moment basis. Such a fragmented approach characterises, too – and again with some significant exceptions – the opera’s vocal lines. Finally, there is the vast assembly of instruments on which Strauss draws for his often balefully dark orchestral writing. In Salome, he had asked for a total of 107 orchestral players. At the premiere of Elektra, there were 112 players in the pit.

These resources are deployed with a mastery he would never excel; though he can be said to have matched it on several occasions. The experience of Elektra as a whole may be – should be – a disturbing one, but there is a genuine catharsis when, after all the horrors and violence, and immediately following Chrysothemis’s desperate cries for her brother’s help, the vast orchestral apparatus swings slowly round and confirms that the curse on the House of Atreus has finally been cleansed with its brutal, blazing closing chords in that most straightforward and affirmative of keys: C major.

Synopsis
The inner courtyard of the palace at Mycenae. Attending to their chores, five maids discuss Elektra – daughter of the dead King Agamemnon, murdered by his wife Klytemnestra and her lover Aegisthus in his bath, following his return from the decade-long Trojan War. Elektra – wild, dishevelled and beast-like – rushes past them. They complain of her crazed, hostile behaviour, but one of the maids defends her. Is she not the daughter of a king? And yet no one in the palace can look her in the face! She is beaten for her pains.

Now Elektra re-enters, alone, and sings to the spirit of Agamemnon. She recalls his cowardly killing and yet looks forward to his return, when the blood will flow from his murderers’ throats and she, her sister Chrysothemis and her brother Orestes will lead the dancing and feasting to follow.

Chrysothemis now interrupts her, to warn that Klytemnestra and Aegisthus are planning to lock Elektra in a tower. Elektra challenges her to wish for disaster to overtake her mother and her mother’s lover, but Chrysothemis yearns instead for a life away from Mycenae, where she can live freely and have children. Because of Elektra they are both held there. She warns her sister that Klytemnestra has dreamt of her son’s return, and is all the more dangerous because she is afraid.

As Chrysothemis leaves, Klytemnestra – a heavily bejewelled yet bloated and wan figure – enters with her retinue. She comments on her daughter’s hostility and asks why the gods have thus rewarded her. She asks to be left alone with Elektra. She confesses her sleeplessness, disturbed by terrible dreams. Elektra explains that a sacrifice must be made, then changes tack and asks why Orestes is forbidden to come home. She knows that her mother is trying to have him killed. Klytemnestra demands the name of the sacrifice she must make. Elektra reveals that it is Klytemnestra herself, and describes how her brother will kill her, and she will help him.

Suddenly, Klytemnestra is brought a message that fills her with joy. She returns to the palace and Chrysothemis arrives to announce that news has come that Orestes is dead. A messenger is sent to tell Aegisthus. Undaunted, Elektra tells Chrysothemis that they must now do the deed. She has kept her father’s axe hidden for the task. Elektra pleads with her sister, but to no avail. She refuses. Elektra curses her. She will do it alone.

As she scrabbles in the dusty soil for the buried axe, a stranger appears. They question each other, the stranger claiming to bear the news of Orestes’s death. He asks her who she is. When she tells him, he confirms that Orestes lives. She demands to know his name. Before he can answer, old servants come and kneel at his feet. It is Orestes himself.

Overcome, Elektra is suddenly aware, with shame, of her appearance. Orestes is prepared to kill Klytemnestra. His sister hymns his happiness. His companion – his tutor – warns him that the moment to strike has come. He enters the palace. Elektra regrets that she has forgotten to give him the axe. Immediately a terrible cry is heard from inside. ‘Strike again!’, cries Elektra. A second scream follows.

Chrysothemis and the maids enter, fretting at this disturbance. Then Aegisthus, apprised of the news of Orestes’s death, returns. With studied courtesy Elektra guides him through the door. Seconds later, he reappears at a window, screaming for help. Chrysothemis and some women enter, acclaiming Orestes’s advent and his bloody deeds. Elektra, in an excess of joy, hears music emanating from within her, and joins in a celebratory duet with her sister. But her mind is set on a darker path. She commences a fierce, maenad-like dance, reaching a triumphant climax, then collapses. Her sister runs to the door of the palace, and beats on it, shouting for their brother.