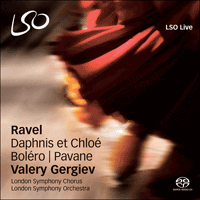 Ravel's ballet Daphnis et Chloé is essentially an extended tone poem, suffused with luscious orchestral colours, portraying the passion of the two protagonists for each other. By contrast, Pavane pour une infante défunte harks back to the simplicity of the eighteenth-century music of Rameau, whilst Boléro is a fiery showpiece, highlighting the Spanish influences that pervade a number of Ravel’s works.

‘[Daphnis] is in the orchestra's blood. Valery Gergiev's combination of attention to detail and grasp of long-term architecture … make this a very enticing prospect. The strings sweep and swoon magnificently, the numerous woodwind solos are rarely less than sublime, while the brass manage both statuesque mobility in the panoramic vistas, and bracing punch in the general dances, ably supported by crackling percussion' (BBC Music Magazine)
'The most striking thing about these fine performances is their seductive combination of tonal warmth and sparkling virtuoso finesse ... Gergiev conjures up an intoxicatingly languorous soundworld' (Classic FM Magazine)
'Gergiev generates a frisson in everything he conducts … this Daphnis with the London Symphony Orchestra has everything one could want—atmosphere, languor, superb wind playing. Gergiev generates more high-voltage drama than rival versions' (Financial Times)
'Gergiev certainly adds to his laurels with a fantastic conducting job here—bringing out the color and dynamics while highlighting every small detail. With his control of the orchestra he makes every bar a real event' (Audiophile Audition, USA)

Daphnis et Chloé – complete ballet
Writing of his music for Daphnis et Chloé Ravel noted: ‘I sought to compose a broad musical fresco, less concerned with archaic fidelity than with loyalty to the Greece of my dreams, which in many ways resembled that imagined and depicted by the French artists of the latter part of the 18th century’. The subject came from a pastoral romance written by the Greek poet Longus around the third century AD. It was proposed to Ravel by the choreographer Mikhail Fokine, for a production by the Russian ballet company that Sergei Diaghilev was planning to bring to Paris.

The composition of this ‘symphonie choréographique’, as he called it, took Ravel more than two years, and it stands with Stravinsky’s three great pre-1914 ballets (The Firebird, Petrushka, The Rite of Spring) in signalling the far-reaching change in the function of music for theatre dance to an organic instead of mainly decorative element. The orchestra in this work is the largest for which Ravel wrote, and is probably larger than any other involved in a commissioned work for dance: besides the instrumental array with quadruple wind, strings to balance that, and a variety of percussion, it includes a wordless four-part chorus.

After differences of approach between Ravel and Fokine, and between them and the designer, Léon Bakst, were resolved, the first performance was given at the Théâtre du Châtelet, Paris, on 8 June 1912. As with the best of choreographic music, the quality of Ravel’s invention gave it enough self-sufficiency for concert performance. ‘The work’, he wrote, ‘is built symphonically on a very strict tonal plan by means of a few themes, the development of which ensures the work’s homogeneity’.

The three scenes are played without a break, beginning with a slow introduction that announces three principal themes representing the spirit of Pan (mysterious horn chords), the nymphs attending him (pastoral flute solo) and the love of Daphnis and Chloé (horn solo). The tempo quickens to a ritual dance before a shrine-like grotto on the edge of a sacred wood, the wordless voices adding the Pan theme. Daphnis and Chloé appear as the music moves into a complex counterpoint of themes. A dance contest is arranged between Daphnis and a rival, Dorcon, with a kiss from Chloé as the prize. Dorcon’s uncouth performance (bassoons) brings general laughter (imitated by the orchestra). Daphnis dances more gracefully (flutes) and claims his prize. Left alone, he is approached by another girl, Lycenion, but her advances are coolly received, then interrupted by the sounds of distant fighting. A new theme on muted horns is heard representing marauding pirates: they invade the scene to abduct Chloé, who drops a sandal which Daphnis finds. He falls in despair before the grotto and invokes Pan’s help. The god appears and consents.

The wordless choir intones the Pan theme for a short interlude leading to the second scene, where the pirates engage in a lengthy and vigorous ensemble dance. Chloé is held prisoner and ordered to dance for them. She does so with a sorrowful reluctance, the drooping fifths of the melody recalling her love theme. As she finishes, the pirate chief is about to claim her when the mood and music suddenly become charged with mystery. A wind machine signals the appearance of Pan, fierce and wrathful. He protects Chloé as the pirates flee in terror. As the scene reverts to the original, the music grows softer with the voices accompanying the transformation. Now begins Ravel’s wonderful evocation of dawn with, as noted in the score, ‘No sound but the murmur of brooklets formed by dew that has run down the rock’. Birdsong is heard, and passing shepherds (piccolo and E flat clarinet) awake the prostrate Daphnis, who looks anxiously for Chloé. A magnificent climax depicts the sun rising in full splendour as Pan restores Chloé to Daphnis, and to a long flute solo they mime the story of Pan and Syrinx as a thanks-offering. Daphnis swears eternal fidelity before the altar of the nymphs, and the music swings into the exhilarating ‘Danse générale’ celebrating the joy of the betrothed pair among their friends and companions.

Pavane pour une infante défunte
Pavane pour une infante défunte was originally composed for solo piano, and was given its première in that form on 5 April 1902 by Ravel’s great friend, the Spanish pianist Ricardo Viñes. The composer completed the equally well-known orchestral version in 1910 and the first performance of this was given in Paris on Christmas Day of that year.

One of Ravel’s life-long preoccupations was the refined sentimentality to be savoured in the cultivation of archaic dance forms, and as early as 1895, in his Menuet antique, he had catered to what was then a well-developed French taste for faux-naïf (pretend innocence) recreations – and modernisations – of 18th-century style. The Pavane was a much more individual essay in this direction. It was the first work that began to give Ravel an international reputation, and it is a defining expression of Ravelian pathos. The title is often taken to mean ‘Pavane for a Dead Princess’ – ‘Infanta’ (French infante) being the Spanish term for a princess of royal blood. Ravel suggested that the aristocratic formality of the piece’s slow dance measure evoked ‘a pavane which a young princess might have danced in bygone days at the court of Spain’, going on to qualify the word défunte by the observation that the music ‘is not a funeral lament for a dead child, but rather an evocation of the pavane that might have been danced by such a little princess as painted by Velázquez’. However, on other occasions he alleged that he chose the title for the sheer pleasure of its assonance. He dedicated the work to another princess: his patron, the Princess Edmond de Polignac, who had been born in Yonkers, New York as Winnaretta Singer, heiress of the Singer Sewing Machine Corporation.

The music unfolds on a stately even measure, suggesting a courtly dance of the Renaissance. On each appearance, the delicate and evocative main theme – first heard on the horns – is illuminated by subtly-changing orchestral textures, and thrown into relief by contrasting episodes – plaintive woodwind, sweeping strings and harp. There is a hypnotic nostalgia to its deliberate yet irresistible motion, and – despite Ravel’s disclaimer – a certain tincture of sadness: the little princess, if ever she existed, is certainly dead by now.

Boléro
Ravel’s most famous orchestral work originated in a commission from the ballerina Ida Rubinstein, who asked him to orchestrate some pieces from the suite Iberia by the Spanish composer Isaac Albéniz. As a result of copyright difficulties Ravel was unable to carry out the task, and decided instead to compose a new piece of his own, in a Spanish dance rhythm. (He originally called it Fandango, before settling on Boléro.) Having discovered a theme with an ‘insistent’ quality, he had the idea – if only as an experiment – of repeating it incessantly without any development or change of tempo but constantly varying and increasing the orchestration.

Boléro was, therefore, premièred as a ballet, danced by Ida Rubinstein, with choreography by Bronislava Nijinska and designs by Alexandre Benois, at the Paris Opéra on 22 November 1928. The setting for the ballet was a Spanish tavern, where a woman is dancing on a table, although Ravel reportedly favoured an outdoor setting with a factory in the background to emphasise the music’s ‘mechanical’ qualities. It was a sensational success, and the piece was almost immediately taken up as an orchestral showpiece. The renowned Italian conductor, Arturo Toscanini, gave the American première in 1929, and by 1930 the first of many commercial recordings had been made. As with the Pavane pour une infante défunte, Ravel was taken aback by its popularity, claiming in a newspaper interview that the piece was simply ‘orchestration without music’.

This is not the case, of course: the music is supplied, over the ceaseless Boléro rhythm on snare drum, by the one and only melody, a remarkable invention in itself. It can be so repetitive, without tiring the ear, because it is very long (two 18-bar sections, each repeated twice), so exquisitely sculpted, and because within itself it enacts a drama of tension and release: the tune seems to struggle to break free of its rhythmic and tonal straitjacket, the climax coming with the urgent, imploring passage of high repeated notes three-quarters of the way through each of its appearances. The only harmony is that which the tune suggests; the accompaniment is a two-note repeated pattern spanning a fifth. Meanwhile the orchestral colours constantly change and the tension rises as the tune remains pinned to its initial key of C major, with no change – an inspired mating of the primitive and the sophisticated. Only in the coda, with a sensational effect of release, does the music modulate to E major, breaking free of its shackles (for a mere eight bars) and returning to C major for a triumphant ending in the loudest, most orgiastic orchestration yet.