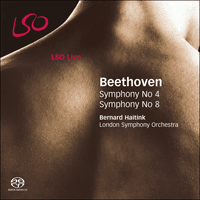 Coming between two of Beethoven's most famous symphonies, Symphony No 4 can seem a relatively light-weight and cheerful work. Written for Count Franz von Oppersdorff, who wanted a symphony similar in vein to No 2, it is a brusque and enjoyable work. Beethoven's Symphony No 8 sees him in playful mood. Featuring humorous twists and turns and relatively brief movements, including the shortest movement of any of his symphonies, it is a light-hearted work.

'The LSO is in absolutely smashing form ... has the scherzo ever had more bounce? ... an unforgettable experience. Nothing proves this more tellingly than the second movement, taken at an ideally lilting tempo. It's a veritable orchestral adventure in terms of color, texture, and range of expression ... this is without doubt on of the best Fourths around ... [the Eighth] is one hell of a ride ... the coda is about as thrilling as it's possible to be in this music' (Classics Today)

The Fourth Symphony is probably Beethoven’s least well-known, a situation which no doubt owes much to its position sandwiched between the Third (the ’Eroica’) – at that time the largest and most complex symphony ever composed – and the viscerally powerful and uplifting Fifth. Beside these two great forward steps in symphonic thinking, the brusque Fourth can seem dwarfed, its relatively lightweight frame and predominantly cheerful nature apparently offering no equivalent to either their massive presences or their mighty extra-musical messages. But it is a thoroughly Beethovenian work nevertheless, taut with muscular strength, propelled with unstoppable momentum, and shot through with its composer’s unmistakable stylistic fingerprints. Produced in the same year as the Violin Concerto, the Fourth Piano Concerto and the three ‘Razumovsky’ string quartets, it purrs with the mature assurance of Beethoven’s so-called ‘middle-period’ compositions, and, like several of those, is among his most lovable and appealing creations.

That Beethoven followed his large and powerful Third, Fifth and Seventh symphonies with more ‘relaxed’ ones has often been pointed out, but it is worth noting that composition of the Fourth Symphony actually began after that of the Fifth. Beethoven spent the summer of 1806 at the country estate of his longstanding Viennese patron, Prince Lichnowsky, and in September the two men together visited the house of one of the Prince’s friends, Count Franz von Oppersdorff, in Upper Silesia (today part of Poland). Oppersdorff maintained a private orchestra, and when the composer arrived he was honoured with a performance of his own four-year-old Second Symphony. Before long the Count had commissioned a new symphony from him as well, and, despite having begun the Fifth, Beethoven set this aside in favour of the work that was to become the Fourth. Quite why he did this we do not know, but we can guess that on the one hand he may not yet have felt ready to push the radical and emotionally demanding Fifth through to completion (he did not finish it until 1808), and on the other that the Count’s evident enthusiasm for the more Haydnesque world of the Second Symphony demanded another work in similar vein. Whatever the reason, the Fourth was soon completed and duly ‘sold’ to Oppersdorff, who became its dedicatee and enjoyed exclusive use of it for six months at a fee of 500 florins.

It is Haydn whose influence lies behind the symphony’s opening, though it is doubtful whether even he ever composed a symphonic slow introduction quite so searching and ambiguous as this one. Indeed, a more likely inspiration might be the ‘Representation of Chaos’ which begins Haydn’s oratorio The Creation, and it was perhaps this similarity which the 20th-century musical essayist Donald Tovey had in mind when he referred to the ‘sky-domed vastness’ of this section; certainly there is an air of awestruck emptiness to it which suggests contemplation of the heavens (a subject Beethoven himself explored more explicitly and serenely that same year in the slow movement of the second ‘Razumovsky’ quartet). This remarkable passage of music eventually leads, via a cunningly calculated acceleration, to the main body of the movement, a bold Allegro Vivace which seems to have put the dark thoughts of the opening behind it, having at the same time somehow drawn strength from them.

Beethoven’s melodic material here is memorable, but it is the way he uses his themes to control rhythmic momentum that is most impressive; everything serves to push the music forward. One inspired example will serve here: at the start of the fast section, listen to the smooth falling figure on the woodwind which swiftly answers the strings’ first phrase; both feature at the close of the movement, but it is the wind phrase, passing downwards through the cellos and basses, which provides the more irresistible driving force.

The second movement maintains this tight control of forward movement, even though in its main theme and subsidiary for solo clarinet this is the tenderest of adagios. The momentum is preserved partly through strategic reappearances of the jagged rhythm of the opening bars, and partly by the way in which Beethoven ‘busies’ the accompaniment to the main theme whenever it returns. The movement has its dark side too, in an unexpected, angry minor-key outburst which interrupts the main theme’s third appearance. Though not so titled, the third movement is in the form of a scherzo, a jocular movement-type in rapid triple-time, which Beethoven had himself developed from the older minuet-and-trio form. Convention dictated that such a movement be in two sections, with the first heard again after the second, but in this symphony Beethoven decided for the first time to expand the scheme so that the bounding first section is heard three times and the second – in this case a lilting tune for the winds with short promptings from the strings – twice. In a further twist of playfulness, the final appearance of the first section is brought to an abruptly premature end by an irascible blast from the horns.

The jokey mood continues into the finale, a movement of almost constant scampering semi-quaver action. The spirit of Haydn is here again, most unequivocally in the mock-tentative, slowed-down version of the main theme, which appears just before the end, but the whole is infused with characteristically Beethovenian dash and strength. Small this symphony may be compared to certain of its counterparts, but it is still palpably the work of a giant.

Beethoven himself called his Eighth Symphony ‘little’, a careless description which over the years has hindered its reputation compared to those of its undeniably grander companions. The fact that it also adopts a less overtly radical style than works such as the Third, Fifth and Ninth symphonies has likewise lessened its standing. How can it be a proper Beethoven symphony when it is so easy on the ear, so jokey? The suggestion is that this is the composer ‘resting’ after the heroic physical efforts of the Seventh Symphony, ‘relaxing’ (perhaps even ‘lapsing’) into the playful, Haydnesque musical world of the 18th century.

In truth, its first Viennese audience was not enormously impressed by it. One reviewer noted after its premiere in the Grosser Redoutensaal in February 1814 (the occasion, incidentally one of the deaf composer’s last, chaotic conducting attempts), that ‘it did not create a furore’, its effect weakened as a result of being heard straight after a performance of the more powerful Seventh Symphony. But he also declared perceptively that ‘if the [Eighth] Symphony should be performed alone hereafter, we have no doubt of its success’, and sure enough, once one remembers to listen to it for what it is instead of what it is not, it does not take long to realise what a thorough-going and compact demonstration of Beethovenian brilliance it is. And a radical one too. The style of the music may be essentially conservative, but structurally the work is bursting with ideas, many of them entirely of a piece with the direction Beethoven’s music was taking at the time, if presented in a more congenial manner. As Hans Keller once put it, ‘when a great composer is complex in one dimension, he tends to be proportionately simple in another, in order to facilitate comprehension’, and the humorous demeanour of the Eighth Symphony does not alter the fact that it is a highly original composition in which Beethoven tries out a number of the formal procedures and concerns that would surface in his later works.

He composed it in the space of a few months in 1812, immediately after completing the Seventh, and right from the start it is clear that he is not in a mood to hang around. The first movement begins without preliminaries, launching in with the first theme and striking off confidently for the second. Yet it takes only 30 seconds or so for the music to lose its way and grind to a standstill before the violins present the rising second theme in what, technically speaking, is the ‘wrong’ key, a faux pas which the woodwind soon rectify. This may seem like a rather academic kind of joke, but its effect can be felt even if not understood, both here and in the numerous other places in this symphony where similar tricks are played. The central development section is surprisingly stormy and leads to a noisy return of the main theme in which upper strings play tremolando while the theme itself is transferred to the lower instruments. It is the theme’s last appearance however, right at the end of the movement, which is the most delightful and witty.

There is no slow movement; instead, a scherzo-like Allegretto whose monotonous repeated notes are said to have been inspired by the recent invention by one of Beethoven’s acquaintances of the metronome. The veracity of this story is questionable – though it is fun to see in the brusquely scrubbed string interruptions impatient winding of the mechanism (Beethoven was reportedly not particularly skilled at operating the new machine) – but perhaps Viennese music-lovers in the composer’s day would have found a stronger reminiscence here of the slow movement of Haydn’s ’Clock’ Symphony.

The ‘scherzo-in-place-of-a-slow-movement’ is followed by a ’minuet-instead-of-a-scherzo’, an elegantly flowing third movement enriched by touches of graceful counterpoint and, in the middle section, courtly writing for clarinet and horns. The symphony ends with a scampering, pell-mell finale groaning with jokes, from the startling ‘wrong note’ that interrupts the main theme, to the very sudden, almost accidental arrival at the serene second theme, to any number of stop-start, what-happens-next moments. Formally, this is the most adventurous movement in the symphony, a sonata-rondo with two development sections, but it is also such a hoot that the listener can be forgiven for neither noticing nor caring.