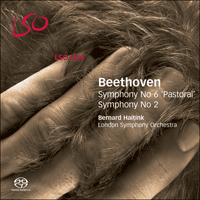 The 'Pastoral' Symphony is one of Beethoven's most consistently popular works, evoking feelings of the natural world's beauty. The symphony embodies the spirit of the dawning Romantic era in its depiction of the countryside, and allowed Beethoven to express his love of nature and the outdoors. At the time of its completion, Symphony No 2 was probably the longest yet composed. Written while he was coming to terms with the onset of deafness, it is surprisingly light hearted and cheerful.

'It is hard to imagine more profoundly satisfying accounts than these … the playing of the LSO is quite magnificent' (BBC Music Magazine)
‘ 'A fantastic performance—pure music-making by a great conductor and an orchestra that responds magnificently to his every request' (Classic FM)
'Outstandingly well played … there is a oneness of conception here which is superb—quite remarkable and ultimately wholly convincing. I'll let you into a secret: I have many recordings of the Beethoven symphonies in my collection but if anyone were to ask me which version of the Pastoral I would recommend, I would first of all direct them to this one' (International Record Review)
'The fruitful influence of the historically-minded period instrument movement on mainstream interpretation is vividly exemplified on this spanking disc by the LSO under a rejuvenated Bernard Haitink. The Second Symphony springs out at us with a freshness and intense physicality ... but also with a most sensitive attention to detail ... the Pastoral is a delight, recapturing the composer's excitement as he arrives in his beloved countryside' (The Sunday Times)
'Utter composure and authority drawn from a lifetime of musical exploration inform Bernard Haitink's latest Beethoven release with the LSO. The attention to detail is breathtaking. Vintage stuff' (The Scotsman)

Beethoven loved nature and the open air. He spent most of his summers away from Vienna in the country retreats of Heiligenstadt, Mödling and Baden, where he would walk the woods and fields notebook in hand, and even back in the city short strolls were a regular part of his work routine. ‘No one can love the countryside as much as I do’, he once said, ‘for surely woods, trees and rocks produce the echo which man desires to hear.’

But nature was not just a balm for the senses; for Beethoven it was evidence of the Creator’s hand. Raised on the tolerant attitudes of the Enlightenment, he had little interest in conventional formal religion, and it was in the outdoors, amidst the wonders of the natural world, that he found himself closest to God. He was hardly alone in that – such feelings were part of the spirit of the early Romantic age – but it was perhaps his unique placing at the threshold of the Classical and Romantic eras in music that allowed such a work as the ‘Pastoral’ Symphony to achieve greatness.

‘More an expression of feeling than painting’, said Beethoven, and it is true that, while the atmosphere of the countryside pervades every bar, the Sixth Symphony can be fully enjoyed without resorting to mental pictures of shepherds, peasants and cuckoos. Even so, members of the audience at the work’s premiere in a freezing cold Theater an der Wien in December 1808 would have had little difficulty recognising the scene Beethoven was laying out before them. Musical evocations of natural phenomena such as running water, storms and birdsong were familiar from the opera house, as were representations of the countryside’s human population by means of rustic tunes and bagpipe-style drones. There had been pastoral symphonies before, while Haydn’s two great late oratorios The Creation and The Seasons, with their brilliantly executed evocations of the natural world, were regular fixtures in the Viennese concert calendar. These, then, were not the novelties of the Sixth. What may have struck its first listeners as more radical was its effortlessly laid-back character, and the air of repose with which, uniquely in a Beethoven symphony, it both begins and ends.

The first movement also introduces us to two other important characteristics of the work, namely themes which seem to want to circle back on themselves in leisurely self-perpetuation, and a general contentedness with simple and slow-moving harmonies. When taking a walk in the country there is no need to hurry, as Beethoven proves in the central development section, where a five-note descending figure borrowed from the opening theme is repeated many times over slowly changing chords, its effect like that of turning one’s gaze to admire different vistas within the same landscape.

The second movement is one of Beethoven’s most gorgeous inspirations, and one which he had been harbouring for some time. The watery accompaniment figure had its origin in an idea noted down in a sketchbook from 1802–03, where it carried the heading: ‘murmur of the brook … the deeper the brook, the deeper the sound.’ Deep is the word; the richness and subtlety of Beethoven’s creation give it an unparalleled power to gladden the heart, and so dreamily do we fall under its spell that it hardly seems out of place when the music twice stops sleepily near the end to allow flute, oboe and clarinet to give us birdsong imitations identified by Beethoven as nightingale, quail and cuckoo.

The last three movements are run together to make an uninterrupted sequence – a move suggested by the programme for sure, but also utterly in keeping with Beethoven’s formal procedures of the time. The third movement is the symphony’s scherzo, and a robust depiction of bucolic merrymaking. Twice Beethoven pokes fun at the village band (the oboist not sure where to come in, the bassoonist only knowing three notes), and twice the music tips over into an earthier dance in which we can almost hear feet stamping. Eventually the revelries are halted by the menacing rumble of approaching thunder, before the fourth-movement storm hits. When it has run its brief but brutal course, and the departing lightning has flashed for the last time, gentle calls given out on clarinet and horn signal the arrival of the finale before going on to form the basis of the movement’s recurring main theme. This hymn of praise is no exultant shout, however, but a joyful and dignified thanksgiving, not just for the brook and the ‘pleasant feelings’ but, we realise, for everything we have witnessed, the storm and the three-note bassoonist included. With a final majestic, swelling peroration, Beethoven ennobles them all.

It is one of music history’s forgotten facts that at the time it was completed in 1802, Beethoven’s Second Symphony was one of the longest in existence. The arrival of the giant Third only a year later has obscured this truth, but it was evidently not lost on the critic who attended the Second’s first performance on 5 April 1803 and denounced it as ‘a hideously writhing wounded dragon that refuses to die’. Indeed, there seems to have been a general feeling that this was a less satisfactory symphony than the First because it strove too hard for effect, erring towards the grotesque at the cost of natural elegance. Nowadays we see the Second as revealing Beethoven in light-hearted mood – full of ebullient energy for sure, but hardly doing anything to frighten the horses. But it is worth remembering that while to today’s ears it may sound like Beethoven still warming up for the major symphonic statements to come, this boisterous ‘little’ symphony would have struck its first listeners as an altogether more powerful and alarming creation than its diffident predecessor.

This is not to say that the overall mood of the Second Symphony is not one of cheerfulness, a cheerfulness, furthermore, that is all the more remarkable for the fact that it grew out of one of the bleakest periods in its composer’s life. In 1802, in an attempt to ward off his oncoming deafness, Beethoven moved out of Vienna and spent the summer and autumn in the quiet rural suburb of Heiligenstadt, from where he wrote (though never sent) his brothers a letter laying bare all the personal doubts and misgivings brought about by his condition. Known now as the ‘Heiligenstadt Testament’, it is a heart-rending document, yet the music which emerged at the end of this tortured summer was this cloudless symphony. At a time when his will to carry on was in danger of evaporating, Beethoven had produced a work of substantial energy and optimism.

The nearest the Second Symphony comes to the sinister is in the slow introduction to the first movement, an unusually long and wide-ranging example which darkens at its heart to a dramatic unison outburst prophetic of the first movement of the Ninth Symphony. Beethoven’s enlargement of a typically Haydnesque feature is characteristic of his formal approach to this symphony, which is in other ways fairly conventional; the main body of the breezily athletic first movement, for instance, deals with its bustling main theme and jauntily militaristic woodwind second in the expected ways, using bits of both to drive the central development section, yet just as the movement seems to have runs its natural course Beethoven embarks on a long coda, thereby provoking a new and altogether more powerful climax.

After this, the slow movement is a relaxed interlude, rich with elegantly wrought themes and wholly untroubled in mood. The Scherzo introduces a playful note in outer sections seemingly more concerned with jokey dynamic contrasts than melody (a state of affairs emphasised by the more plainly tuneful central Trio), and the humour is carried exuberantly in to the finale, whose fun and games are again capped by a long coda which makes much play of the two-note ‘flick’ which had opened the movement. As that Viennese critic had noted so impatiently, Beethoven seems reluctant to stop.