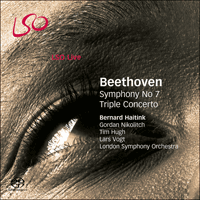 Beethoven was rarely explicit about any meaning behind his works. However it is impossible to listen to his Symphony No 7 without being captivated by a sense of euphoria, tainted only by what is possibly the most profound slow movement he was to write. Where the symphony is bold in its exuberance, the Triple Concerto is playful, providing its soloists with a glorious opportunity to flaunt their skills.

'Surging rhythms that explore every conceivable movement are very much a feature of Bernard Haitink's fine new recording ... the LSO Live CD is even more compelling with the inclusion of the Triple Concerto, in a performance of chamber music lightness ... under Haitink's vigorous baton this Cinderella work sems even more underrated. Seventy-five minutes of exceptional music' (The Mail on Sunday)
'A blazing performance of the Seventh Symphony that reaches a superbly disciplined and frenzied conclusion' (BBC Music Magazine)

'He is a different, energised man, caught up in the thrill of the moment, on the podium—and it is our good fortune that these marvellous concerts will have an extended life on disc' (The Sunday Times)
'Bernard Haitink delivers a splendid interpretation of Beethoven's Seventh: taut, exciting, always musical, and in no way inhibited ... Haitink's concern for clean rhythmic articulation really pays off ... the result is truly of the highest possible standard' (Classics Today)

The movement titles and specific birdcalls of the ‘Pastoral’ Symphony are about as explicit as Beethoven got when it came to noting down ‘meanings’ for his major works. The man who first realised the symphony’s universal expressive potentialities in the ‘Eroica’, and for whom extra-musical inspirations formed an important part of his creative thinking, was usually happy to let his music do the talking – ‘the listener should be able to discover the situations himself’, he wrote on sketches for the ‘Pastoral’. And while few could deny that the ‘Eroica’ seems to embody a sense of rebirth, or that the Fifth marks out some kind of journey from darkness to light, the composer left no actual clues that he thought of them thus. It is the music which communicates these things so strongly that we feel we understand them.

Compared to the above symphonies, the Seventh is a little harder to pin down. The rhythms which dominate each one of its movements have given rise to one oft-quoted appraisal: Wagner’s description of it as ‘the apotheosis of the dance’. But could that not equally well be said of a Bach Suite? And by the time it has ended, has the Seventh Symphony not expressed a purer and freer form of euphoria than might primarily be associated with dancing? The modern Beethoven scholar David Wyn Jones has suggested that in this work Beethoven set himself the challenge of moulding a ‘continuous, cumulative celebration of joy’, and this seems a more accurate assessment than Wagner’s. Yet even then, how exactly does the melancholy second movement fit in?

The perceptions of the Seventh’s earliest audiences may well have been determined by the timing and circumstances of the premiere. It was first performed in December 1813 in the hall of Vienna University in a charity concert organised to raise funds for the widows and orphans of wounded soldiers. Austria and her allies had recently scored a significant victory over Napoleonic forces at the Battle of Hanau, and the concert no doubt had a patriotic air; also on the programme was Beethoven’s noisy battle-piece Wellington’s Victory, and it would be no surprise if the jubilant Seventh was seen at first as another war celebration – the second movement could then even be a lament for the wounded of the type traditional in such pieces. But in fact it had been completed long before Hanau, in the spring of the previous year.

The Seventh starts with a massive slow introduction, the longest in any of Beethoven’s symphonies. Its leisurely wind themes contain few hints of the energy soon to be unleashed, but there is a coiled-spring quality to the heavy accents and upward string scales which accompany them. When the main part of the first movement arrives, however, it is not with a rush but with a gentle slide into the principal theme, a lilting melody announced by the flute. This is also where we meet the movement’s defining rhythmic unit, a three-note figure (think of the rhythm of the word ’Amsterdam’) which from these unassuming beginnings gathers the power to dominate almost as obsessively, and in its way as powerfully, as the more famous four-note motif of the Fifth Symphony.

The second movement is one of the most striking in all of Beethoven’s symphonies, and one of the most immediately influential. It was encored at the first performance – a testament no doubt both to its extraordinary affecting power and its ‘stand-out’ quality within the symphony – and it did not take long for it to make its mark on other composers. Its insistent slow march – actually a set of variations on a minor-key theme, twice interrupted by consolatory major-key episodes – soon found imitators. Schubert in particular returned many times both to its mood and to its characteristic long-short-short rhythm.

With the third movement, a scherzo, we return to the prevailingly joyful tenor of the work. The main sections are typically Beethovenian, a lithe and playful mix of light-footed passages and forte outbursts in the outer sections, and deceptive simplicity in the twice-heard contrasting section, said to have been based on the melody of an Austrian pilgrim hymn.

In the finale the music reaches its peak of elation in an unstoppable swirl of ebullience and energy, driven along by off-beat accents and prodding repeated-note figures. It is a subtlety worth listening out for when, in the central development section, Beethoven makes the two-note accompaniment figure in the bass of the main theme a subject for discussion among the orchestra, but really for the listener there is little choice here but to abandon oneself to the music’s engulfing exuberance.

‘Did he who wrote the Ninth write thee?’ The glib paraphrase of Blake by one writer from the first half of the last century is not at all untypical of the way in which Beethoven’s affable Triple Concerto has been dispraised over the years. Yet despite its relative unpopularity with musicologists suspicious of its apparent lack of typically Beethovenian punch, the work has retained a place in the repertoire, and along with Mozart’s Sinfonia Concertante for violin and viola, and Brahms’s Double Concerto for violin and cello, is one of very few post-Baroque concertos for more than one soloist still to receive anything like regular performance.

It enjoyed a fair number of outings in Beethoven’s day too, despite the appearance of having been carefully tailored to suit the particular talents of its original interpreters. Composed in 1803–04, it was intended for Beethoven’s patron and piano pupil Archduke Rudolph, a good musician but a player of relatively modest ability, and thus it is that the piano-writing, for all its elegance and good taste, lacks the kind of difficulty found in the solo concertos. The violin and cello parts, on the other hand, were written for top professional virtuosi – the violinist Carl August Siedler and the cellist and composer Anton Kraft, the man for whom Haydn had composed his D major Concerto – and this is reflected in the more technically demanding role these instruments are given. This was the line-up for the work’s private premiere in 1804, and further performances followed with various combinations of soloists until the work was finally heard at a public concert for the first time in May 1808. Unfortunately it made a poor impression on that occasion, falling early victim (judging from the report of Beethoven’s friend Schindler) to performers who ‘undertook it too lightly’.

To more modern-day dismissals of the Triple Concerto as ‘weak’ Beethoven, the Twentieth-century writer Hans Keller once offered the answer that ‘we have perhaps come to realise that Beethoven’s imperfections are not lack of perfections, but absence of completeness – in view of things to come’. What was to come in this case, and soon, was the Fourth Piano Concerto and the Violin Concerto, both of them works whose laid-back spaciousness, and a few other details besides, owe something to the expansive nature of the Triple Concerto.

More importantly, however, the Triple Concerto has glories of its own. The very opening is quietly original, its first theme being announced mysteriously by cellos and basses on their own before becoming the basis of a drawn-out orchestral crescendo. It is with this theme that the soloists eventually enter one-by-one, but the movement has a wealth of melodic material as well as a few surprises, not the least being the triumphantly loud return to the main theme after the central development section.

The Largo (in A flat major) is lyrical and uncomplicated, its mood of tranquillity set by a sublime opening cello solo, while the way in which it leads directly to the finale places it in the same category as its counterparts in the Violin Concerto and the Fourth Piano Concerto. The finale itself is a boisterous Rondo in the style of a polonaise, a familiar enough style to us now thanks to Chopin, but in Beethoven’s day a dance whose place in art-music was relatively new. The Polish flavour reaches its height in an ebullient episode about midway through, but the whole movement has a freshness and a vigour which make it a fitting conclusion to this relaxed yet expertly crafted work.