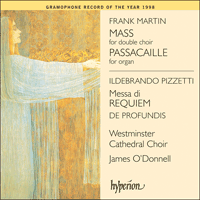 'One of the greatest a cappella works written this century'; so writes Gramophone's Marc Rochester in the sleeve note to this recording, and this is no exaggeration. Written in 1922, with a devastatingly effective Agnus Dei being added in 1926, Frank Martin's Mass for double choir is a truly wonderful work, combining intensely personal moments of religious contemplation with outbursts of overwhelming glory.

Pizzetti's Messa di Requiem, also composed in 1922, is a work firmly steeped in the Gregorian tradition, Pizzetti weaving an intriguing twentieth-century web over the familiar tunes.

Also included on this recording are Martin's Passacaille, the composer's only work for solo organ, and Pizzetti's De profundis, dedicated by way of apology to a colleague on whom Pizzetti had previously vented his infamous foul temper.