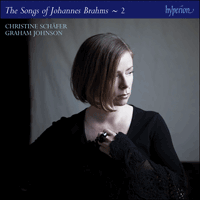 Following the iconic series of the complete songs of Schubert and Schumann, Graham Johnson’s latest enterprise traverses the complete songs of Brahms. He is joined here on Volume 2 by the wonderful Christine Schäfer, whose contribution to the Schumann song series won a prestigious Gramophone Award.

Each volume in the series takes us on a journey through Brahms’s career, from youthful settings to songs of maturity. Volume 2 includes a selection of delightful Mädchenlieder and concludes with a handful of Brahms’s intimate folksong settings.

Discerningly partnered by Graham Johnson, Christine Schäfer is in perfect voice. She sings with a pure, luminous tone, crystal clear diction and eloquent phrasing, making this a superb recital in its own right. As part of the wider survey of the complete songs of Brahms, it will take an essential place in any Lieder-lover’s collection.

‘The second volume of Hyperion's complete Brahms songs is the generous and imaginatively planned anthology that we have come to expect from these important series compiled by Graham Johnson—witness his excellent Schubert and Schumann series. And it comes, as ever, with richly cross-referenced notes and essays’ (BBC Music Magazine)

This disc is the second of a series that will present the entire piano-accompanied songs and vocal works of Johannes Brahms. As such it is a companion series to the series undertaken by Hyperion for the songs of Schubert, Schumann, Fauré and Strauss.

Brahms, like Schumann, but unlike Schubert with his much greater output, issued the majority of his songs in groups collected by opus number. There is a tendency in modern scholarship to suggest that he envisaged, or at least hoped for, performances of his songs in these original opus number groupings. Of course one cannot deny that some planning (though of a rather variable kind) went into the arrangement of these song bouquets for publication, but good order and cohesion in printed form (as in an anthology where poems are arranged to be discovered by the reader in a certain sequence), though pleasing to the intellect, do not automatically transfer to the world of the recital platform where one encounters a host of different practical problems, casting (male or female singer) and key-sequences (high or low voice) among them. There is nothing more meticulously planned in all song literature than the volume of 53 songs of Hugo Wolf’s Mörike Lieder—but we have no evidence to suggest that the composer, who had worked closely with the publishers to make this volume a feast for the eye, envisaged a performance of these songs in a single sitting, or on a single day.

Each disc of the Hyperion edition takes a journey through Brahms’s career. The songs are not quite presented in chronological order (Brahms had a way of including earlier songs in later opus numbers) but they do appear here in the order that the songs were presented to the world. Each recital represents a different journey through the repertoire (and thus through Brahms’s life). In a number of these Hyperion recitals an opus number will be presented in its entirety. In the case of this disc it is a grouping of Mädchenlieder from various opus numbers that was apparently envisaged by Brahms, and published after his death by Simrock in order to fulfil the composer’s wishes. In this series the folksongs of 1894 are will be shared between all the singers in the series. In a letter to Marie Scherer of 20 October 1894 we learn of Brahms’s reaction to an evening (arranged by the well-meaning Amalie Joachim) where an entire occasion was given over to these Volkslieder: ‘I do not think it a happy idea to spend a whole evening singing nothing but these folksongs. A few introduced among other (serious and sober!) songs might be enjoyable and refreshing.’ In this series this is exactly what will happen.