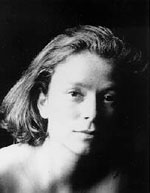 The outstanding young German soprano Christine Schäfer began her studies at the Berlin Conservatory under Professor Ingrid Figur in 1984. She has since taken part in masterclasses with the late Arleen Auger, has studied Lieder with Aribert Reimann and Dietrich Fischer-Dieskau, and has worked with Sena Jurinac. She has been the recipient of many prestigious prizes.

In 1988 Christine Schäfer made her highly-acclaimed recital debut at the Berlin Festival, singing Aribert Reimann's Nachträume and has since developed a flourishing concert and recital career throughout Europe. She has performed with the Gächinger Kantorei, the Windsbacher Knabenchor, the Stuttgarter Hymnus-Chorknaben, the RIAS Kammerchor, the Cologne Chamber Orchestra, the New Sinfonietta in Amsterdam and Musica Antiqua in Cologne.

Most recently she made her debut with the Boston Symphony Orchestra singing the soprano solo in Mahler's Symphony No 4 in Boston and New York under Seiji Ozawa. She has also worked under Helmut Rilling, Sir Charles Mackerras, Uwe Gronostay, Wolfgang Schafer, Leopold Hager, Helmut Müller-Brühl, Peter Neumann, Eric Ericson, Reinhard Goebel and Nikolaus Harnoncourt. She has given recitals in Paris, London and Frankfurt.

Festival appearances have included the Baroque Festival in Würzburg, the Bach Festival in Los Angeles, the 'Musikkultur heute' Festival in the former Soviet Union, the Oregon Bach Festival, the European Music Festival in Stuttgart, the Mozart-Woche in Salzburg and the Bach-Woche in Ansbach. Christine Schäfer made her operatic debut as Papagena at the Monnaie Theatre in Brussels in 1991. 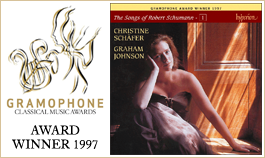