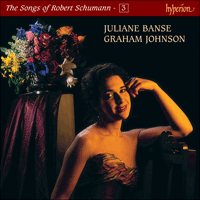 The third issue in our series of ‘The Songs of Robert Schumann’ introduces the outstanding young German/Swiss soprano Julianne Banse to the Hyperion label in a programme of songs both familiar and unfamiliar, not to say extremely rare. At the hear of the disc is ‘Frauenliebe und leben’ recorded for the first time with Chamisso’s final poem (unset by Schumann), spoken by Miss Banse to complete the story: ‘Traum der eignen Tage’ (Dream of my own days that now are distant). The most extraordinary songs on the disc are the cycle of Seven Songs to the words of Elisabeth Kulmann, a gifted girl who died at the age of seventeen, who Schumann admired enough to write this ‘song biography’ of her, with his own words (recorded here) introducing each song. As usual the CD comes with Graham Johnson’s fascinating and exhaustive notes (over 40,000 words) with which collectors of our Schubert Edition are now well familiar.

Most of the music on this album is also available as part of the specially priced box set Schumann: The Complete Songs: 'A landmark issue no serious collector should be without' (The Mail on Sunday).

‘An unqualified success … a glorious interpreter, warm-voiced and wholly in sympathy with the task in hand. The famous cycle Frauenliebe und Leben receives a peerless reading’ (The Daily Telegraph)
‘The care that has gone into the literary and musicological side of the project is perfectly matched by the musical results. Banse proves to be a wonderfully perceptive interpreter. In every respect this is a wonderful Lieder disc’ (The Guardian)
‘[Juliane Banse] is a born lieder interpreter. A must-buy for lieder lovers’ (The Sunday Times)
‘Banse's enchanting purity of line and ability to shape this music with the subtlest of tonal and dynamic inflections are a constant source of pleasure. Hyperion's standards of presentation are typically faultless’ (Hi-Fi News)

If there is a theme uniting the songs on this disc, it is Schumann’s partiality for out-of-the-way and mediocre texts. Or so it may seem without understanding the all-important question of context which makes the study of this composer both rewarding and perplexing. Schumann, despite a lifelong love of literature inherited from his bookseller-publisher father, had little of Hugo Wolf’s intellectual rigour when it came to appraising poetry. ‘What is the point of that?’ he might have asked. He certainly set some of the greatest poems of his time (Heine, Eichendorff, Kerner, the astonishing anthology of poems that makes up Myrthen), but his muse was awakened not only by literary excellence. Schumann’s music is alive like the work of few other composers, with endlessly interwoven personal references and resonances, and for the creation of these dream-like strands of tone-poetry, inspiration came from many sources, including the music that had been written before him and which appears, as if in quotation marks, in some of his piano pieces and songs.

Schumann’s music is always about something, as those allusive musical quotes (such as those from Beethoven’s An die ferne Geliebte, one of them on this disc) make clear. Often it seems that a poem’s content, what it is about, is as important as the manner in which it is written. Schumann, like Schubert, weighed these questions in the balance and often decided in favour of friendly imperfection. For example, the composer noted that Julius Mosen’s Der Nussbaum was basically a weak poem, but he set it nevertheless, and gave it a prominent place (the third song in an alphabet sequence where C stood for Clara) in his wedding cycle, Myrthen (and weak poem or not, the song is a masterpiece). If it had been pointed out to Schumann that the poems of Chamisso’s Frauenliebe und -leben were inferior to those of the Eichendorff Liederkreis he might have agreed while also shrugging his shoulders. The important thing for him was that the poems seemed touchingly relevant to his own relationship with Clara Wieck; he wished to write a cycle of which she – the embodiment of das Ewig-Weibliche – was both muse and mouthpiece. The Chamisso poems were ideal for this purpose, and not bad poems either.

On other occasions the biographical background of the poets, who they were, was even more important than the quality of their work, judged objectively. In Schumann’s eyes, a poem was so imbued with the life-force of the person who wrote it that he found it difficult, or perhaps simply unnecessary, to separate the qualities of creator and creation. In many cases this had happy results. We probably owe the great Heine song-cycles to the fact that the poet happened to be in an untypically receptive and kindly mood when the young Schumann met him in Munich one day in 1828. The gently ironic smile that played about Heine’s lips on that occasion (described in a Schumann letter) is what we hear in the music, the most sympathetic portrait by far, in any medium, that exists of that controversial man. If Heine had been an unbearable grouch on that day, who knows? But an amiable poet, a lieber Dichter, gave birth to a Dichterliebe. Another instance: Schumann’s veneration for the poet Lenau inspired the beautiful Op 90 cycle, but his desire to honour the poet’s memory (whom he believed to have died) prompted that cycle’s extraordinarily personal codicil, Requiem, as if the composer himself were eulogising at the graveside.

One of the charges usually laid against Franz Schubert is that he was far too easily inclined to set the indifferent poetry of his friends and contemporaries – local Viennese figures like Kenner, Spaun, Hüttenbrenner, Ottenwalt, Schlechta and so on. And yet Schumann was equally partial to the verses of friends and acquaintances, particularly as he got older. Like Schubert, he seems to have been easily able to overlook literary deficiencies as a result of his personal links with the poets in question. It is surely human nature to judge less harshly the artistic efforts of people whom one likes, and Schumann’s innate generosity perhaps made him willing to give people the benefit of the doubt when it came to membership of the Davidsbund. His friendships with such writers as Rückert and Hebbel were the fruitful collaboration of artistic equals, but communications with the unpublished amateurs Julius Buddeus, Charles L’Egru and Wolfgang Müller (all in Volume 1 of this series) produced music of some quality, despite the fact that we know little about these poets. We must presume that Schumann was touched and moved by these people and their various gestures of consideration and friendship – the word simpatico comes to mind – and it is this which has come down to us in the music.