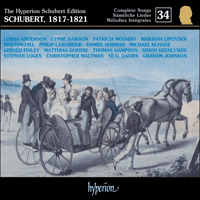 Another fascinating Schubertiad, this time comprising songs from the period 1817 to 1821. As before, it contains some familiar masterpieces, some unknown masterpieces, rarities and fragments, many of them receiving their first recording. Particularly fetching are the Singübungen—a wordless singing exercise for two sopranos, and Über allen Zauber Liebe (‘Love above all magic’) which, of all the Schubert fragments, is the most alluring. (Only four bars of music were needed to complete the setting and if the composer had provided the missing bars himself, and the piece subsequently published, it is hard to imagine what could have prevented the song from being known throughout the world, treasured and hummed by connoisseurs.)

‘A feast of finely wrought, intelligent interpretations … the readings make an indelible impression’ (Gramophone)
‘This disc is a must for any serious Schubert collector, its pleasures enhanced by Graham Johnson's observant accompaniments and his copious notes, dazzling as ever in their erudition, wit and range of illusion’ (BBC Music Magazine)
‘Excellent’ (International Record Review)
‘Exciting—some great songs and some wonderful singing’ (Classic CD)
‘Treasures indeed’ (Hi-Fi News)
‘A delightful recital’ (BBC CD Review)

1815 and 1816 were by far Schubert’s most prolific years in terms of the number of songs he composed. Following this period of brilliant adolescence, we begin with 1817 when the composer met his first (and by many accounts, greatest) contemporary interpreter, Johann Michael Vogl, and won him to his cause. Schubert was on the threshold of manhood, but still young and highly impressionable, and we traverse many lieder landscapes to greet the maturity and mastery of a man of 24, the Schubert of the ‘symphonic’ songs of 1821, the young composer now famous in Vienna, published, and certain of an important opera commission. These were the final years of the composer’s struggle to achieve independence from his father (and freedom from the duties of the schoolroom); they include his richest engagement with songs of classical mythology, and his closest association with the poet Mayrhofer, as well as his work on a number of poets whose influence is very much part of his middle years (Schreiber, the Schlegel brothers, Novalis, Silbert). In 1821 there is a return to a new Goethe, the recent poet of the West-Östlicher Divan, and Schubert’s penultimate engagement with the elusive lyrics of Wilhelm Meister. Through all this period we note the intellectual and emotional influence of the composer’s closest friend, Franz von Schober.

The following summations of each year’s activity are meant to give the listener some idea of the context, biographical and musical, in which the works to be heard on this disc were composed.

1817
Schubert’s first meeting with Johann Michael Vogl. Schubert leaves the school house and moves in with Franz Schober until August when Schober has to leave Vienna [Abschied von einem Freunde (Schubert) D578]. He is forced to return to the parental home. Deepening friendship with Johann Mayrhofer. Josef Hüttenbrenner becomes a self-appointed Schubert publicist.

‘It is arguable that an anthology of great songs from 1817 would better represent Schubert’s versatile lyrical genius than any other year of his life.’ (John Reed)

1818
The Schubert family move to the Rossau where the composer was probably temporarily constrained to return to teaching. Erlafsee (see 1817) was published as a supplement to the Mahlerisches Taschenbuch – the first Schubert song to appear in print in any form. The first Overture in the Italian Style is the first work of Schubert to achieve public performance. Summer residency in Zseliz (Hungary) as music-master to the daughters of Count Esterházy. Not only songs and singing exercises but also piano duets are written for the family. On his return from Hungary in October, Schubert moves in with the poet Mayrhofer whom he had known since 1814. He is commissioned by the Kärntnertor Theatre (through the good offices of Vogl) to write the opera Die Zwillingsbrüder which would eventually be produced in 1820.

Of all the years in Schubert’s working life this was the least productive in terms of number of works. It was a turning-point in the composer’s life, the period when he seems to have spent a lot of time agonising about his future, refusing to return to the schoolhouse to fulfil his father’s wishes.

1819
During the whole of this year Schubert shares Mayrhofer’s tiny apartment in the Wipplingerstrasse. The cramped conditions of a very small room meant that there was probably an arrangement whereby the composer worked during the mornings (when Mayrhofer was at the censor’s office) and absented himself in the afternoons permitting the poet to write during these hours. The first Schubert song to be performed in public is Schäfers Klagelied (Goethe) D121 at the ‘Roman Emperor’ Inn on 28 February. The composer is much occupied with the score for Die Zwillingsbrüder for which he is paid 180 florins by the Court Theatre. In early July (and until mid-September) Schubert goes on holiday with Johann Michael Vogl in Steyr, a town in Upper Austria where he will return in two subsequent summers (1823 and 1825). The singer’s birthday is celebrated with a special cantata in his honour.

1820
One of the biggest undertakings of the year is the oratorio Lazarus which is begun in January. This work ranks as one of Schubert’s most experimental scores where he seems to anticipate the thematic practices of Wagner. The composer is arrested (with Bruchmann and other members of the circle) during a police raid on the rooms of Johann Senn. He is released, but Senn is imprisoned and committed to trial, the result of which was an order restricting him to his native Tyrol. The opera Die Zwillingsbrüder is produced at the Kärntnertor Theatre in June and runs for six performances. In August the ‘Zauberspiel’ Die Zauberharfe receives eight performances. In terms of theatrical success this is the (rather muted) high point of Schubert’s life; he would never have another opera played in a theatre during his lifetime. The composer spends his first sojourn at Atzenbrugg castle just outside Vienna (see cover illustration, dating from this year); this was to be a summer gathering point for the Schubertians for the next few years. The success of a public performance of Erlkönig (Goethe) D138 in December leads to a plan to publish Schubert songs privately. Schubert decides to live on his own at the end of the year, leaving Mayrhofer with whom he had shared a small room for some two years – the longest period that he was ever to occupy a single address in Vienna, apart from his parental home.

1821
At the beginning of the year Schubert applies for a post as a repetiteur at the Kärntnertor Theatre, a job which does not suit him (he coaches the soprano Karoline Unger; see note in connection with Die Geselligkeit on this disc). At the end of January there is a big musical party at Schober’s which may have been the first ever Schubertiad as such. A concert at the Kärntnertor Theatre where Erlkönig is sung by Vogl (not accompanied by the composer) makes Schubert an overnight success with the Viennese public in a way that he had never before experienced. Erlkönig is published by Cappi and Diabelli as Opus 1 in April. Das Dörfchen (on this disc) also enjoys a large public success. Once again the summer is spent in Atzenbrugg, and in the autumn the composer goes with Schober to St. Pölten, Lower Austria, to work intensively on the opera Alfonso und Estrella. The composer has an overture (in E minor) included in a Philharmonic Society concert in November. With his hopes high for the success of his large opera, and with many ‘firsts’ to look back on in 1821, we may judge this to be the period when Schubert felt that he was at last on the ‘right track’. Disappointment was to follow at the beginning of 1822 (concerning the fate of the opera), and tragedy was to strike, changing the composer’s life forever, at the end of that year.

Settings of Goethe: Versunken D715, Grenzen der Menschheit D716, Geheimes D719, Suleika I D720, Mignon (‘Heiss mich nicht reden’) first setting D726, Mignon (‘So lasst mich scheinen’), second setting D727. The date of Suleika II D717 is uncertain (perhaps 1824). Another song of uncertain date is Wandrers Nachtlied II D768. It could have been written as early as 1821 which, after all, is a year rich in Goethe settings, but it is usually placed at the end of 1822 with Schubert’s final batch of Goethe songs. Even if it is an 1822 song (or even later) it makes an appropriate end to this disc, bringing the list of Goethe songs recorded in the Hyperion Schubert Edition to a close.