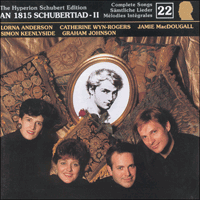 1815 was Schubert's annus mirabilis when a truly extraordinary pitch of musical creativity was inspired by a range of poetic influences of unprecedented (and unrepeated) breadth. With the issue of this volume the Hyperion Schubert Edition completes its survey of the songs of this year (with the exception of eight Goethe settings to be included in Volume 24). There is a fuller account of the little we know about Schubert's life in this period in the introduction to Volumes 7 and 10, and in Volume 20, the first of the Schubertiads in this series devoted to the year's settings.

In order to build up a coherent portrait-in-sound of the year the listener will have to dive between many tracks on many discs. The majority of the recitals in the series (indeed all of them except Volumes 2, 11, 17 and 21) contain songs from 1815, and Volumes 7 and 10 are devoted exclusively to these seminal twelve months. Because it is so often talked about as being the 'great Schubert year' – equivalent to Schumann's 1840 and Wolf's 1888 – it might be useful to the listener to see at a glance the songs of the period in chronological order. It was Schubert's habit in this period to date his songs exactly; we know both the day and month of the majority of the 1815 songs, but occasionally only the month is given, and in a few cases just the year. This gave the scholars (in particular Otto Erich Deutsch as he compiled his gigantic catalogue) a number of problems in determining the exact order of the songs' composition. Despite significant advances in the technology of dating music through the manuscript paper used, we shall probably never know the exact chronology, although it is the business of the musicologist to make educated guesses. This seems easier, however, later in the composer's life when we are in possession of more biographical information.

We can easily see the pattern of Schubert's relationship to his poets, above all the ascendancy of Goethe. That love, kindled in late 1814, lasted throughout 1815. But some of the other lists tell an equally interesting story. The Schiller catalogue, for example, is substantial, but we can already sense that it reflects an enthusiasm which, although older than that for Goethe, does not equal it in affection and empathy. Nevertheless Schubert would continue to set more Schiller (a good deal in 1816). Goethe would remain a favourite for many a season.

Other relationships, such as those with Kosegarten and Klopstock are almost entirely restricted to this year in question. A single Mayrhofer song is a presentiment of a consuming enthusiasm due to blossom within the next two years, and a single setting by Schober is an early sign of a warm and fruitful collaboration with one of Schubert's closest friends. The settings of Josef Kenner are signs of a school friendship which was not to last or deepen in anything like the same way.

The composer has more or less outgrown such poets as Bertrand and Bernard as soon as he has set them; adolescent interest in the blood and thunder of gothic horror has been replaced by the young romantic's enthusiasm for the Celtic bard Ossian (whom he was never to know was James Macpherson's fraudulent invention) which was to last for two years into 1816. In the same way, admiration for a very different poet like Hölty is shared between these two most prolific of years, and the composer's passion for Matthisson, a strong feature of the 1814 songs, spills into 1815 and also survives until the end of 1816. We have only one Salis-Seewis setting from the very end of 1815, but it announces one of the poetic heroes of the following year. (The songs of 1816 have already been the subject of Volume 17 and will be more or less completed with the issue of Volume 23).

The meeting with Stolberg's work was to bear more interesting fruit in later years, and the same may be said of the amateur poetry of Schubert's friend Baron von Schlechta which the composer set over an eleven-year period, and much more significantly than here. The love for the poetry, patriotic and otherwise, of Theodor Körner runs its course in 1815, however; one suspects that as he grew more politically aware, Schubert outgrew the jingoism which backed king and country at all costs. Once the danger of the Hundred Days was over, when Napoleon returned from Elba to be defeated at Waterloo, this poet, for all his attractive qualities and his personal friendship with the composer, seemed part of a younger phase of hero worship. There are also other poets – Baumberg, Fellinger and Stoll, to name but three – who did very well by the composer in 1815; we, the listeners, have also gained by these short musical liaisons and the beautiful songs which resulted. We might wish that Schubert had re-encountered these poets in later years, and it is not impossible that he too would have met them again with joy. But the fact is that he did not.

The elusive presence that hovers behind any study of Schubert's predilections for his poets is that of chance, and how large a role it played. We shall never know which writers the composer actively took against after a period of enthusiasm – tired or bored with a poetic voice which had exhausted its use to him – or whether he turned to something else to set to music simply because he had run out of material. Schubert scholars would give much to understand exactly what the composer looked for in a text (we would have to inhabit his musical mind in order to do so) but the biggest lesson we can learn is that the fantastic range of his literary sympathies cannot have been governed by chance alone. We may get the impression of promiscuous reading in haphazard fashion, but, as in everything else related to the creativity of this particular genius, there is a great deal more order and control in the seeming shambles of his life than we had at first thought. Schubert is like the man with an untidy desk piled high with papers who, contrary to what one may think, knows exactly where everything is. On this, as on every other issue involving his music, we cannot second-guess a man who somehow or other has provided us with a work-list which forms an astonishingly comprehensive anthology of poetry both ancient and modern as well as local and international. It pertains to his own time and background in Biedermeier Vienna and is also timeless in its immortality and significance when it comes to the exalted work of Goethe and the great German writers who preceded him. Surely this gives us the best of both worlds; Schubert's choice of literature has been governed by a wonderful balance of Austria and Germany, as well as of heart and mind. It also implies a range of reading which betokens a young connoisseur who is limited only by what is permitted him by his country's censors. It is little wonder that early in 1816 Josef von Spaun conceived an ambitious plan to launch Schubert into print with a series of publications which would arrange the composer's best songs into volumes arranged according to the poets. This scheme was outlined in a letter to Goethe which asked for the great man's support. Perhaps predictably, this letter was ignored and Spaun's plan came to nothing. Nevertheless, the astonishing emotional range of poems set in 1815, both serious and light, could easily have sustained such a project. Schubert's friends knew that something quite extraordinary had happened, and they now began to spread the word.