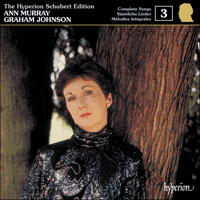 Schubert & his Friends I

‘This persuasive disc is faultlessly recorded’ (Gramophone)
‘We await more with enthusiasm and admiration’ (American Record Guide)
‘For me this represents some of the finest Lieder singing on record’ (CDReview)
‘Ann Murray's singing is flawless’ (Music and Musicians)
‘Simply superb’ (San Francisco Chronicle)
‘In Ann Murray we have a worthy successor in the Ferrier/Baker line, a lovely voice used with great sensitivity’ (Which CD)

So far as in me lies, I value, above all other things out of my control, the joining hands of friendship with men who are lovers of truth. I believe that nothing in the world, of things outside our own control, brings more peace than the possibility of affectionate intercourse with such men …

The words of Spinoza go straight to the heart of German romanticism (he inspired Lessing, Goethe and Heine) and of how Franz Schubert lived his life.

The songs in this recital all came into being in the highly creative ambience of the Schubert circle in Vienna. Mayrhofer, Stadler, Schober and Collin were all friends of the composer, and the good offices of Josef von Spaun were an important factor in Schubert's adolescence and early career. Everyone knows that few of the young men and women who turn their hands to poetry are destined to be world-famous writers—but the surge of creative self-confidence that Schubert felt in his late teens was accompanied by a typical generosity towards the talents of his contemporaries. They were not yet to know that he was an immortal master, and for all he knew a number of his friends might well turn out to be young Goethes (or at least young Werthers); if creativity and self-improvement were possible for him, they were possible for any young hopeful. In middle class circles in Biedermeier Vienna almost everyone dabbled in poetry, music and painting. The intermingling of the arts was inevitable, and the creation of songs became a flexible, living thing on both sides of the words and music divide. Schubert the dreamer, in touch with many aspects of the musical and literary past, was also Schubert the man of the present. He needed the discussion and personal contact that even the least gifted of his collaborators brought him. He would be far less the Schubert we love if he had lived and worked in splendid isolation with only a library of classics for company. Intellectual isolation was bad enough anyway. Under Metternich's rule, Austria was cut off from other German-speaking states, and the student community came under intolerable scrutiny as a potential hotbed of insurrection. This had the effect of uniting like-minded young men in projects of common purpose. But these projects were seldom, if ever, sinister political plots; instead harmless organisations of brotherhood sprang up which had more to do with high spirits than high treason. It is in this context that a band of would-be artists against the philistines (Schumann was later to call such initiates Davidsbündler) gathered around Franz Schubert. The fun and comradeship of laying plans, albeit only artistic ones (for artists trust that their work will somehow change the world) provided these young and resentful liberals with a flavour of the forbidden cabals so feared by Metternich. On one famous occasion in March 1820 the police actually arrested a group of friends (including Schubert and the Tyrolean poet Johann Senn) and the composer was released only after questioning. The poet was kept in detention for fourteen months without trial. Some time later Schubert set two of Senn's poems; in this context the act of adding music to a friend's poetry is a statement of defiance and solidarity. Music had been Schubert's means of making avowals of trust and friendship ever since his schooldays. It was his means of `affectionate intercourse', in Spinoza's words. The life and vitality of the Schubertiads depended on his friends playing their part. That the circle as a whole created its own entertainment was the fun and point of it. In the smaller gatherings (often for men only) a coffee house atmosphere prevailed and there might be a game of chess or a philosophical discussion accompanied by wine and tobacco. The inclusion of the ladies meant dancing, charades and horseplay a-plenty. But the serious side of the meetings was not forgotten for long: there was always Schubert's music, and readings of new literature with the proud young authors often present. Schubert always took the creative strivings of his friends as seriously as they took his work. The fact that he set so much of their poetry to music is not an indication of weak literary judgement but of his warmth and humility. He judged personal loyalties to be more important than anything else; the exceptional harmony of the Schubertiads was the result of both his music and his way with people. These songs are a by-product of the happiest moments Schubert had in his short life. It made him happy to give pleasure to the friends whose words were clothed in homespun yet indestructible musical garments that have ensured their safe (if sometimes obscure) survival to this day. Every time we hear a song with a so-called `weak' poem by one of his friends, we should consider the background of affection and companionship that went into its making.

The song which begins this recital was written only a month after the celebrated Der Tod und das Mädchen, a setting of a poem by Matthias Claudius in which a terrified girl begs in vain for death to pass her by. That work must have made a strong impression on the Schubert circle because barely a month later the composer provided a type of sequel. The text was by the same man castigated so amusingly in the musical-joke letter Herrn Josef von Spaun (in Volume 4) who was Schubert's oldest, truest and most level-headed friend. This lone Spaun setting, Der Jüngling und der Tod, is thus the quintessential example of a song from the composer's circle; it is fitting that it should stand at the head of a recital devoted to settings by Schubert's friends. It also gives us an important clue to the thoughts, feelings and conversations of the composer's circle concerning death. In that age of high infant mortality, short life-expectancy and the constant threat of disease (abetted by the appallingly unhygienic conditions in Vienna) people had a closer everyday relationship to death than in our own sanitised and euphemistic times. The words of this song show that unlike the frightened maiden of Claudius's poem, the young men of Schubert's circle fancied that they looked to death as a releaser and friend, whom they were willing, even eager, to embrace. Einstein wrote of an earlier era: 'Bach welcomed death, although he feared it: and between his fear and his longing stood only an indomitable rock-like faith.' The same Christian faith could not be assumed of an Austrian generation born after the French Revolution—heirs of the Enlightenment on the one hand, and on the other sufferers under a dictatorial repression in which the controlling and manipulative interests of church and state were strongly linked. No, the young man in Spaun's poem is not hoping for a Christian heaven but rather deliverance, at any price, from life's torments. Der Jüngling und der Tod was composed at a time when, under the poet Mayrhofer's influence, the composer was deeply interested in classical myth—Philoktet, Memnon, Antigone und Oedip and Ganymed (Volume 5) were all written in that same month, March 1817. Schubert and his friends were asking questions, exploring alternatives, looking to Greek antiquity and pantheism for the answers to life's—and death's—mysteries. The longing for death in this poem is thus partly an attempt to enter into the Greek spirit of things, and partly the pose of the disillusioned romantic poet who scorns life and holds it cheap. But we can also see a quixotic tendency to invoke the threat of suicide as a grand, even poetic, gesture. This has long been part of the somewhat melodramatic repertory of the misunderstood artist. Schubert probably contemplated suicide in the dark days of 1823, and his friend Mayrhofer killed himself in 1836. Even in Biedermeier times the stage is already set for that famous double suicide in 1889 of the Crown Prince Rudolf and his mistress in the suburb of Mayerling. It is not for nothing that Sigmund Freud was later to find deep and revealing meanings in the dreams of his clientele; there could have been no more fertile ground than Vienna for the beginnings of psychoanalysis.