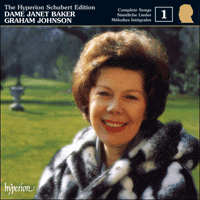 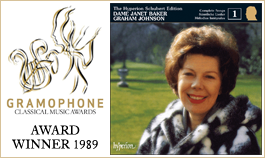 ‘Dame Janet is in glorious voice’ (The Penguin Guide to Compact Discs)
‘One of the loveliest records even Dame Janet has made’ (The Guardian)
‘A generous and revelatory recital of Goethe and Schiller settings. Janet Baker breaks the champagne bottle over one of the most important recording projects of the half century’ (The Times)

The sheer size of Schubert’s song output bewildered his friends and contemporaries and it has been perplexing even enthusiastic Schubertians ever since. The general musical public may know that the final count is six hundred or more, but until relatively recently that figure has somehow discouraged further investigation: one may get to know nine symphonies, thirty-two piano sonatas, even forty-eight preludes and fugues, but the idea of six hundred songs, each with a musical and poetic life of its own, engenders an awe-inspired respect that dampens, rather than fires, enthusiasm.

Of course there have been important milestones in the popularization of this repertory. Richard Capell’s book Schubert’s Songs (1928) taught a whole generation to go searching for buried treasure but, to judge from the content of record catalogues, most of the more adventurous explorations were confined to the home. The World’s Encyclopaedia of Recorded Music (1950) lists under two hundred songs (including the three cycles which account for fifty-eight of them) and even a good many of these were deleted at the time The public has always been content to hear the well-known Schubert songs again and again, and some of them have become test-pieces, touchstones of the singer’s art. Nothing can detract from the well-deserved glory of these popular Lieder, but the full extent of Schubert’s achievement in song—underestimated in some important ways even to this day—can only be appreciated if the rarer blossoms are shown side by side with the evergreens. I am convinced that even the most slender of Schubert’s creations is inimitable and will show somewhere and somehow the master’s hand.

In the early 1970s Dietrich Fischer-Dieskau set about the Herculean task of bringing the whole output to the public’s ears: his twenty-nine LPs form a one-man show of dazzling versatility. It was of course really a two-man show, with the invaluable collaboration of Gerald Moore. Together they recorded the vast majority of Schubert’s Lieder (the omissions were those hundred or so songs which only a woman can sing) and in so doing made the œuvre accessible in an unprecedented way. As a student I remember saving up for those enormous blue boxes of LPs; they opened up the world for a young Schubertian in countless ways. I discovered that my prized (and recently acquired) seven-volume Peters Edition of the songs was not nearly as comprehensive as I had thought and that Eusebius Mandyczewskis much more difficult to acquire Gesamtausgabe contained many delights ignored by Peters’ editor, Max Friedländer. In the Peters Edition songs were arranged more or less in order of popularity, but Fischer-Dieskau’s recording followed the chronology of songs established by Mandyczewski in 1894 (although scholarship has changed its mind on many things since then). Schubert studies never stand still: since the Fischer-Dieskau/Moore recordings the slow appearance of the Neue Schubert Ausgabe has clarified many musicological details and John Reed’s Schubert Song Companion has given the English-speaking reader an alphabetical source book which makes it easy to find quickly any song with its translation and historical background. Also invaluable is Fischer-Dieskau’s biographical study of the Schubert songs, written as he was working on his recording project. The Hyperion Schubert Edition makes its debut at the same time as the publication of Richard Wigmore’s new translations of all of Schubert’s songs (Schubert: The Complete Song Texts, Victor Gollancz Ltd, London 1988) which we shall be using for the entire series.

Even Schubert once said, ‘What can one do after Beethoven?’ The recording artists of today also live in the shadow of previous achievements. Gerald Moore’s legacy to me was his ten-volume Schubert edition, full of the evidence, in pencilled markings, of feverish work recording with Fischer-Dieskau in Berlin over a number of summers. And yet, as I leaf through some of the earlier volumes I find page after page of what would still seem to most people unknown and insignificant songs. I am convinced that these pieces are, in their own shy way, treasures, but placed together in a large jewel case, a boxed set, there is a danger that too many of them, one after the other, make a dull effect. It is all too tempting to overlook tiny gems and rummage in the box to find the crowning glories which, in their turn, are not shown at their best when placed too closely in the same setting.

Perhaps the time has come to show the Schubert treasury in a different light. There should certainly be a record in the vault of each and every piece, but should they not be displayed a few at a time where the famous items of the collection throw light on, rather than show up, their humbler brothers? There is something to be said for spending an afternoon in a small museum rather than a week in the Louvre; in a well arranged exhibition the great pieces are not shown together in a single room, but are strategically placed in settings which reflect well on them and their surroundings. The interplay of great and small, of light and shade, of major and minor, are thoroughly Schubertian priorities.

The aim of this series is thus neither primarily musicological nor chronological. It calls on the vocal personalities of many different singers just as, in his own lifetime, Schubert’s work was performed by not only his favourite singer Vogl (the Fischer-Dieskau of his day) but also by Ludwig Tietze, August von Gymnich, Karl von Schönstein, Anna Milder-Hauptmann, the Fröhlich sisters, Sophie Müller, and so on. Each disc in our series offers a selection of songs carefully balanced between the rare and the familiar. In each case the programme has been built around a singer and aims to be a vocal portrait of a special personality at the same time as a homage to Schubert. We believe that it is the singer’s art, much more than musicological considerations, which encourages people to listen to records of unfamiliar Lieder. Neglected songs linger in the ears of the public only when they are given life by a particular singer who suits them. Schubert himself wrote on the autograph of a song: ‘I recommend this song very specially to the singer P and the pianist St.’

Each disc, carefully matching singer to songs, has been made separately to avoid the feeling of a musical marathon; in this way the singer and accompanist are able to concentrate their energies on finding the way to perform not only a handful of masterpieces but also, on each record, a manageable number of unknown songs—Lieder which best reveal their secrets, first to the performer and then to the listener, when they are not lost in a line-up of superficially similar material. When Schubert himself gathered his Lieder together for publication he showed he was interested in programme-building: he took songs from various periods and garlanded then together in some way. More often than not the poet was the binding thread (Goethe, Schiller, Mayrhofer) but sometimes there are philosophical or thematic links and contrasts. In our series we have taken the spirit of these Schubertian ideas to find songs that fit together as a programme, using in our century the larger canvas of the CD, rather than the Opus Number.

The mixed Schubert recital has always appealed to the record-buying public, and the encyclopaedic boxed sets of the complete Schubert Lieder are now gramophone classics. This series of records aims to combine the entertainment of the first, time-honoured approach with the serious musical intent of the second. Because the series includes all the women’s songs it will be the first truly complete survey of Schubert’s song output. A comprehensive index of songs, first lines and artists is available in the Hyperion book BKS44201/40; this will enable the collector to find any Schubert song quickly, and construct for himself, if he so wishes, a chronological sequence. Although each individual disc is a one-man show (plus accompanist!) the series rejoices in the diversity of its cast. We aim to make this collection of records a comprehensive survey of the finest Schubert singers of our time, singing those parts of the repertory to which they are vocally and emotionally suited. The collector of The Hyperion Schubert Edition will get to know all the Schubert Lieder in manageable instalments. In the process the large cast of singers from different generations and countries will inevitably reveal the breadth and catholicity of Schubert’s Shakespearian output, wherein is contained tragedy, history, comedy and lyric, and a huge variety of roles for artists of every type.