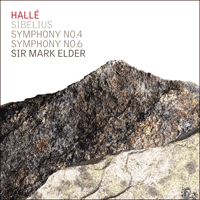 From the darkly unsettling opening chords of Symphony No 4 to the captivating originality of No 6, this new release from the Hallé brings to fruition a new Sibelius cycle from an orchestra long associated with the Finnish master.

Symphony No 4 in A minor Op 63
Sibelius’s fourth symphony has long had a reputation as his most ‘difficult’. Which is not to say that it does not have its admirers, who have sometimes compared it to Beethoven’s late quartets for its depth of expression and intellectual originality. Sibelius began work on it in 1910, during a period of intense personal crisis. Two years earlier, surgeons had removed a tumour from his throat. Although the operation was successful, Sibelius was terrified of the cancer recurring. For a while he gave up cigars and alcohol, although abstaining from the latter was a severe trial of strength and led to terrible withdrawal symptoms. Many of the works he wrote around this time are touched by a sense of isolation and the closeness of death, but there is one piece above all that it is hard not to see as a personal confession, a cry ‘from out of the depths’: the fourth symphony.

Entries in Sibelius’s diary at the time that he was engaged on this work give some idea of the range of his mood-swings:

16 August: When will I get this development [the first movement] finished? And be able to concentrate my mind and have the stamina to carry it all through? I managed when I had cigars and wine, but now I have to find new ways. I must!

30 August: Inspired. The development is ready in my head. I dare say I shall have the whole movement sketched out today.

22 September: All my youth and childhood, the former with its terrible storms and after-effects. The corpses still rise to the surface. Help!! Du musst dich zusammenraffen [You must pull yourself together]. If only I could rid myself of these dark shadows. Or at least put them into some new perspective. If you can’t do that, put the past behind you. You mustn’t go under, there’s too much on the plus side.

Taken by themselves, some of these jottings may appear melodramatic. Put them beside the music of the fourth symphony and the expressions of pain become believable enough. And there is one line that may be particularly relevant to the outcome of the symphony, where Sibelius says that, if he can’t rid himself of his ‘dark shadows’, he might be able to ‘put them into some new perspective’. The fourth symphony contains some of the darkest and most unsettling music he ever wrote; the minor-key ending offers no consolation. But, listening to this symphony, one may feel that at the end inner blackness and despair have been faced with courage and resolution, and indeed put into ‘some new perspective’. Perhaps the radiant optimism of the next (and much more popular) fifth symphony was only possible because Sibelius was prepared to confront those shadows fully in the fourth. Whatever the listener feels—and Sibelius was never the kind of composer to insist on one particular interpretation—there’s no mistaking the originality and imaginative power of this music. In fact, early audiences were shocked: in Sweden the fourth symphony was booed, while American critics condemned it as ‘ultra-modern’ and ‘dissonant and doleful’.

The start is like a door opening slowly onto a sombre new world. Cellos, basses and bassoons, playing fortissimo, spell out the interval of the tritone—a step of three whole tones—which is to dominate the symphony almost until the very end. A solo cello sings sadly, then the music rises to a climax, with baleful brass and anguished violins. The second theme brings temporary warmth and repose, but the music that follows (once more initiated by the solo cello) soon strays into haunted country. A more or less straightforward recapitulation leads to a brief, spare coda for timpani and strings—just five bars. Sibelius’s economy of means in this symphony is masterly.

At first the Allegro molto vivace second movement feels like a release from gloom. But gradually the shadows return, the dancing figures grow more and more uneasy. Then, with a sudden doubling of the tempo, the music becomes stormier. The end is disconcertingly unexpected: violins hint at the opening oboe theme, then, with three quiet drum taps, the music abruptly halts.

The slow third movement is perhaps the most original. From a few scraps of motif on flutes Sibelius gradually assembles a heroically striving tune—the process is rather like watching a speeded-up film of a plant growing. But the mood remains bleak. One writer has described this movement as like ‘a lost soul looking for a final home’. In the end, the striving comes to nothing. Heroic aspiration has failed.

Nothing prepares us for the finale. Strings seize on the last note of the Largo and make it the springboard for an energetic, apparently positive Allegro, the mood brightened by the chiming of a glockenspiel. But, as in the second movement, uneasiness grows. Eventually the music builds to a desperate, grindingly dissonant climax in which tonality teeters on the brink of total disintegration. At its high point the glockenspiel tinkles for the last time, then the finale plunges into a gloomy coda. The end is curiously matter-of-fact: forlorn bird-calls from flute and oboe, then string chords cadencing stoically in the minor key, mezzo forte. Anguish there may be in this music, but never sentimentality.

Symphony No 6 in D minor Op 104
Each one of Sibelius’s symphonies has a character of its own—hardly surprising, given his description of them as ‘confessions of faith from the different periods of my life’. But to some extent the sixth stands apart from the others. It seems almost deliberately un-heroic—far removed from the epic striving of his fifth and seventh symphonies, the expressively charged, Slav-influenced Romanticism of the first two, the muscular Classicism of the third or the agonised soul-searching of the fourth. Despite the prevailing minor mode, it is ultimately one of the calmest things Sibelius ever wrote. There are no readily quotable ‘great tunes’, no ‘Swan Hymn’ as in the fifth symphony, and yet the music seems to be almost constantly singing. There is also a strange purity about much of the writing—reminiscent of the remark attributed to Sibelius that, while other composers offered rich cocktails, his intention was to give the world ‘the purest spring water’.

Sibelius’s sixth symphony is one of the most beautiful and original pieces of music he ever wrote. Yet it has never been as popular as its great neighbours, the fifth and the seventh symphonies. The orchestra of the sixth symphony—including bass clarinet and harp—is one of the most colourful Sibelius ever used in a symphony but, time and time again, it is the string section that holds the attention, whether in the quiet, ethereal counterpoint that opens the work or in the gorgeous sustained hymn that brings it to its close. Complementing the luminous or mysterious string writing, woodwind bird-calls and craggy brass chords contribute to the typical Sibelian sound-world.

One would imagine that a work of such individuality and unity of purpose must have been conceived in a single vision. In fact, it took the composer quite a while to realise what the nature of his sixth symphony was to be. At one stage he was talking about a work in three movements, ‘the last a Hellenic rondo’. Some of the themes of the symphony first appear in sketches for the fifth symphony; others were originally associated with plans for a second violin concerto. (What a shame nothing ever came of those!) But gradually the material took on a life of its own.

One unusual feature of the sixth symphony is its tonality—or, rather, modality. The symphony is described as being ‘in D minor’, but often the music has more to do with the old church Dorian mode: imagine a scale of D on the piano, using only the white notes of the keyboard—with no B flat or C sharp. (Such modalism is common in Finnish folk music, as in other folk cultures: the original tune of ‘Greensleeves’ was in the Dorian mode.) In earlier symphonies Sibelius relied on motifs or characteristic intervals to bind the ideas together in a single argument; here it is the recurring modal colouring that gives the work its sense of unity. Sibelius might also have been thinking of one of his great musical idols, the Italian Renaissance master Palestrina. The opening of the sixth symphony is the closest he ever came to imitating the freely-floating polyphonic style of Palestrina’s choral works, and the tribute was almost certainly intentional.

The four movements develop on high individual lines—there’s little sense in trying to explain them in terms of the familiar classical forms. Sibelius once said that a great symphony should be like a river, and this musical river follows its own course, without resort to artificial channelling. After the serene counterpoint of the opening, the first movement becomes more active, with rustling string ostinatos (short repeated figures) and long singing lines for strings and woodwind. But it ends enigmatically with eerie low string tremolandos, nobly aspiring brass and an oddly un-final cadence for woodwind and strings.

The second movement is no less elusive: a kind of waltz-tune, emerging from quiet woodwind chords, is suddenly cut off at its climax and we are transported to a hushed Nordic landscape with ghostly whispering strings and snatches of bird-calls on woodwind.

The dance-like third movement begins as if it’s going to be a fairly conventional scherzo, but then the dotted rhythm of the opening seems to get stuck in a groove, quietly handed backwards and forwards between strings and woodwind while flutes and harp pick out a folk-like tune in imitation. The whole process happens twice—then, with a sudden dramatic gesture, the movement is over.

More folk-like phrases set the fourth and final movement in motion. The music becomes stormy, but calm slowly returns and, with a reminiscence of the symphony’s opening, the strings begin the long winding-down to the rapt, hymn-like close.