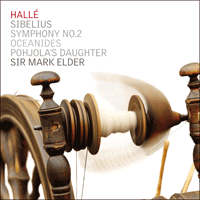 Symphony No 2, The Oceanides & Pohjola's Daughter

‘The precision of Elder's 'Pohjola's Daughter', with its carefully tiered dynamics makes a much stronger impression and so does the hauntingly atmospheric Oceanides, which rises to a powerful climax’ (Gramophone)
‘The Hallé strings conjure up wonderful dark hues in the opening of 'Pohjola', and a silvery lightness to underpin the dancing woodwind in 'The Oceanides'. Elder's approach to the symphony is a measured, slow-burning one. He's careful not to ratchet up the drama too early’ (The Guardian)

‘The cumulative power of the playing—and Elder’s certain grasp of the symphony’s architecture— builds to a powerful climax in this rapturously applauded live performance’ (The Sunday Times)» More
‘Sir Mark Elder is an inspirational conductor and there aren’t too many of those around today. Playing with dramatic bite the Hallé is certainly on its finest form with this all-Sibelius disc. Excellent sound quality adds to the desirability of this release’ (MusicWeb International)
‘There are three admirable Sibelius performances here. The orchestral playing throughout matches the very high standards that we’ve come to expect from this team’ (MusicWeb International)

Like Richard Strauss, Sibelius was a master of the tone poem. But unlike Strauss he was cautious about attaching detailed, explicit stories. In his first great tone poem, En Saga, the programme is simply the title: A Saga. It is left to the listener to guess who the saga’s hero might be, and the nature of his exploits—though there isn’t much doubt that they end tragically. Sibelius’s last orchestral work, Tapiola, is more concerned with evoking the many moods of a great Northern forest, and again the composer leaves listeners free to dream the forest into existence for themselves, without any verbal signposts.

On the face of it, Pohjola’s daughter, dating from 1906, is different. The music does come with a story, authorised by Sibelius, and printed in verse in the score. It describes one of the adventures of Väinämöinen—the wizard-hero of the Finnish national epic, Kalevala. Travelling home from the dark country of Pohjola, Väinämöinen sees Pohjola’s beautiful but cold-hearted daughter sitting at her spinning wheel on the arc of a rainbow. He falls in love with her, begging her to come down and join him. She agrees, but only if Väinämöinen can conjure a boat from her spindle. Väinämöinen summons all his powers but fails disastrously. Humiliated and furious, he leaps onto his sleigh and vanishes. Only then, the poem tells us, does he hold up his head again. A loser he may be, but not spiritually defeated.

The sombre opening of Pohjola’s daughter, with its gorgeous array of bass sonorities (deep horns, solo cello, bassoon, bass clarinet, contrabassoon), evokes ‘the dark realm of Pohjola’, from which Väinämöinen emerges on his sleigh as the tempo begins to quicken (driving repeated string figures and a splendid long tune begun by oboes). After a granite-like fanfare for full brass, Väinämöinen first sees Pohjola’s daughter, illustrated in a sudden change to rippling harp and high violins (clearly the girl perched provocatively on the rainbow) with delicate phrases for oboe and cor anglais. Väinämöinen’s struggles can be followed through to the catastrophic final climax. The only significant divergence from the poem is at the end. If Sibelius’s Väinämöinen does lift up his head in pride again, we don’t hear it. Instead the orchestral texture gradually thins out until we are left with icy high violins, and a final low, almost inaudible sigh from cellos and basses.

Interestingly, Sibelius only decided on this story-line after he had begun writing the music. He had thought of calling the work simply ‘A Hero’s Life’ but that would have invited comparison with Strauss’s tone poem, Ein Heldenleben, written some eight years earlier. In any case, where Strauss’s work ends with the hero victorious, happily dreaming of past triumphs, Sibelius ends with failure and disillusion. Perhaps Sibelius had a philosophical point in mind: that the idea of the romantic hero itself has failed. Whether or not one goes along with Sibelius’s programme, Pohjola’s daughter is a compact, gripping experience, unique amongst Sibelius’s works in its range of orchestral colour, and as graphic as any work that ever bore the designation ‘tone poem’.

The Oceanides is one of Sibelius’s most powerful and atmospheric tone poems, yet for some reason, it remains a rarity in the concert hall and also on CD. Perhaps it is the fact that a work lasting only 10 minutes or so requires substantial rehearsal time. Yet The Oceanides can make an impact out of all proportion to its length.

Sibelius composed the tone poem in 1914 to a commission from the wealthy American music patrons Carl Stoeckel and Ellen Battell-Stoeckel, for performance at the music festival at Norfolk, Connecticut. By the end of March he was able to send off a complete score to America. But soon he had began work on a radically new version of the piece—effectively a complete recomposition based on some of the old ideas. Sibelius was still working on the revision during the voyage, and there were further corrections after he arrived in America. Whether it’s true or not, it is hugely tempting to infer that the experience of the long journey across the Atlantic affected the character of the revision. Before the voyage, Sibelius had never experienced the full power of a vast ocean. The Baltic Sea, which he knew well, is virtually landlocked, tideless and, on the whole, relatively well-behaved. The conductor Osmo Vänskä, who conducted the premiere of the first version, has aptly described that piece as ‘more like a large lake than a mighty ocean’. The revised version is a very different matter.

The Oceanides begins with a wonderful musical impression of slowly clearing mists (muted violins) above a swelling sea (two sets of timpani), from which the unmistakable cries of seabirds emerge on flutes. Harps and undulating strings—and, later, glockenspiel—present a calm, even sparkling surface, but there are suggestions of a powerful disturbance in the depths. Gradually the string writing becomes more agitated as elemental chord progressions mount slowly on brass and timpani. These lead to an immense climax, which breaks like a great wave; then we are left with more woodwind bird calls, and an uneasy stillness.

The Second Symphony—for a long time the most popular of Sibelius’s seven numbered symphonies—sounds like a product of happy times. The biographies tell a different story. Early in 1901, before he began the symphony, Sibelius and his family had made a trip to Italy, eagerly visiting art galleries and churches where the composer enjoyed music by one of his lifelong heroes, the renaissance master Palestrina. At this time Sibelius planned to write a tone poem based on the legend of Don Juan. But his domestic situation was going through one of its frequent crises. At Rapallo his daughter contracted typhus, reminding Sibelius of the death of a daughter in the previous year.

Lack of funds added to the strain, as did news from home: the Russians were pressing ahead with their attempts at cultural colonisation of Finland; the country’s very identity was in peril. Suddenly, Sibelius deserted his wife and family and disappeared to Rome. The fact that his marriage did not collapse altogether is a tribute to the single-minded devotion of his wife Aino, a woman for whom the term ‘long suffering’ might have been invented. Out of all this, somehow, in 1901/02, came the Second Symphony (which received its UK premiere in Manchester in 1905, by the Hallé conducted by Hans Richter). Asked what attracted him most to the symphonic form, Sibelius cited the ‘profound logic which created an inner connection between all the motifs’. The Allegretto first movement of the Second Symphony is the finest example of organic logic that Sibelius had created so far. In its opening bars, strings present a figure in pulsating triplets, which at its end rises three notes: F sharp–G–A.

That three-note motif is the seed from which almost everything in this movement derives. Turn it upside down and you have the answering theme on clarinets and oboes; run it downwards and then back up again, and you have the beginning of the forte tune on violins which emerges a little later; play it backwards and you have the basis of the woodwind’s urgent second subject.

This process of transformation—intellectual and powerfully intuitive at the same time—gives the music an almost Beethovenian energy and allows Sibelius to build a thrilling climax at the beginning of the recapitulation. At the end of the movement the opening string figures return, rising as before, then falling to the tonic: F sharp–E–D. The effect of a full close is as inevitable and satisfying as a mathematical QED. The miracle is that this music is so full of life—nowhere more so than at the central climax, with its exhilarating, heroic brass fanfares.

Ideas for Sibelius’s projected work on the Don Juan myth eventually found their way into the slow movement of the Second Symphony. Some words that he jotted down for the opening of the tone poem fit very neatly with the musical events of the first section of the second movement: ‘Sitting in the twilight in my castle. A stranger comes in. I ask him more than once who he is. Finally he strikes up a song. Then Don Juan knows who he is—Death.’ Twilight, ghostly footsteps on pizzicato cellos and double basses, a sombre bassoon tune (Death’s song), anxious repeated questionings, a crescendo, then the revelation of ‘Death’ on full brass, fff—it’s all there if you wish to hear it. But the theme that follows, a warm major-key melody for strings, marked ppp, has a very different label in Sibelius’s sketches: ‘Christus’. Sibelius never mentioned a programme for this movement—symphonies were symphonies, not tone poems. But it is possible to hear this music as a battle for the soul of Don Juan between Life/Christus and Death. If so, as shrill woodwind and brass rage impotently against the dying of the light in the bleak coda, there can be little doubt that it is ultimately Death who wins. But not for long.

The third movement scherzo erupts into life. Twice the slower, more melancholy Trio interrupts its lightning-speed dance. After the second interruption by the oboe’s chant-like tune the mood grows more turbulent. The first movement’s three-note germinal motif returns, rising sequentially in tearing string figures. Then, at the height of a massive crescendo, the Finale theme emerges—a version of the three-note seed motif—in full splendour on strings, the brass responding with heroic fanfares. (Finnish nationalists were so stirred by the tune that they interpreted it as a political statement portraying the Finns’ resistance to Russian imperialism. The symphony soon acquired a nickname, ‘Liberation’, but there is no evidence Sibelius ever conceived it in those terms.) A lamenting second theme (woodwind over ominously murmuring string figures) was apparently composed in memory of Sibelius’s sister-in-law, who had committed suicide. At the end of the symphony the three-note motif returns, radiantly, on trumpets—only now it rises another step: D–E–F sharp–G. A new theme is born from the old. It is difficult to think of another 20th-century symphony with such an unequivocally positive ending.