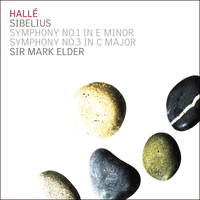 ‘A thought-provoking pairing, finely recorded’ (Gramophone)
‘Elder provides satisfyingly symphonic accounts with sensitive attention to balance, structure, phrasing and dynamics’ (MusicWeb International)
‘In this magnificent live performance, Elder brings out all the magic and beauty of the work … one of the top drawer recommendations of the Sibelius symphonies’ (Classical.net)» More

When Sibelius wrote his First Symphony, in 1899, he was still very much under the influence of Romanticism—particularly the Romanticism of the Russian master Tchaikovsky. ‘There is much in that man that I recognise in myself,’ he wrote to his wife, Aino. It is not surprising, then, to find several Tchaikovskian touches in Sibelius’s First Symphony, particularly the languishing tune which opens the slow movement. Sibelius’s decision to end the symphony tragically (unusually for a symphony at that time) and in the minor key may mark the impact of Tchaikovsky’s Pathétique Symphony which had been heard twice in Helsinki since its Russian premiere in 1893. But there were other influences at work: Bruckner in the craggy brass writing and the pounding dance rhythms of the Scherzo; and also Berlioz, since Sibelius had been overwhelmed by a performance of Symphonie fantastique in Berlin in 1898. Apart from its dramatic impact, Berlioz’s early-Romantic masterpiece no doubt encouraged Sibelius to think harder about his own use of the orchestra, and the scoring of the First Symphony shows a new confidence and imagination.

The very opening of the Andante ma non troppo is like nothing else in the 19th-century symphonic repertoire: above a sustained drum roll, a solo clarinet intones a long, mournful lament. It finishes its musings alone then, as the tempo changes to Allegro energico, the second violins enter with a high tremolando. Over this, the first violins introduce the principal theme, striking for its long-held opening note and downwards plunge, which is taken up and developed in free imitation. This—along with a chant-like figure for wind and timpani and a more aspiring string theme—builds to a rock-like climax, with the original string motif hammered out by brass and timpani.

Quietly shimmering strings and harp introduce the second main theme on flutes. This too whips up an exciting crescendo, leading to a turbulent development section. The rock-like first climax returns, followed by a fairly orthodox recapitulation, though leaving out the string, harp and flute theme. The movement culminates in another imposing, brassy fortissimo but Sibelius springs a surprise at the end, suddenly cutting off the music with two chords from pizzicato strings and harp.

The slower second movement, Andante (but not too slow), begins with two themes: the ‘languishing’ Tchaikovskian tune and a more resolute chordal tune for woodwind and horns. But despite Tchaikovsky’s ghostly presence, Sibelius soon shows his own hand: in the bare writing for woodwind alone; in the eerie passage for flutes, oboes, timpani and solo cello which follows the first big climax; and in the rising and falling string figures (wind in the tree-tops? waves on a storm-tossed sea?) which accompany the final flare-up. At last the Tchaikovskian tune returns, in mid-phrase, and with it comes a kind of tranquillity.

This uneasy peace is blown away by the beginning of the Scherzo, in which throbbing plucked string chords and a sharply rhythmic motif for timpani are taken up by other sections of the orchestra. Contrast comes with the slower and quieter Trio section, marked Lento (but not too slow), introduced by a chordal motif on horns, tuba, bassoons and cello. But this doesn’t last long. Soon the elemental dance begins again, this time building to a brusque conclusion.

Sibelius marks the Finale ‘Quasi una fantasia’ (Almost like a fantasy). He would almost certainly have been thinking of Tchaikovsky’s Fantasy-Overture Romeo and Juliet, and perhaps still more of the same composer’s Symphonic Fantasia Francesca da Rimini, which—like this symphony—ends darkly in E minor. Some writers have tried to read Tchaikovskian story-lines in this music; others have linked it with the Finnish Kullervo legend, on which Sibelius had based his choral-orchestral Kullervo Symphony of 1892 (Kullervo being a distant Nordic cousin of the Greek Oedipus). But none of these ingenious interpretations quite sticks, and Sibelius left no clues as to any non-musical programme.

This last movement’s ardent opening theme is none other than the lonely clarinet melody which began the first movement, now scored for strings (minus the double basses). After this it becomes hard to chart individual themes or motifs: the music is carried on a flood of ideas, the momentum unmistakably tragic. Eventually the impassioned second theme returns on full strings, with a rich orchestral accompaniment. This leads to a forceful, brass-dominated fortissimo, reminiscent of the end of the first movement. As if to underline the connection, the symphony concludes with a dramatically diminishing drum roll and two pizzicato string chords, only now plucked more quietly. There’s no mistaking the grimness of this ending.

At the time when Sibelius was labouring slowly on his Third Symphony, between 1904 and 1907, Finland was still a Grand Duchy of Russia rather than a fully independent state. But the composer had begun to turn his back on his Romantic nationalist past. After its triumphant premiere in 1902, his Second Symphony had been quickly seized upon by Finns as a ‘Liberation Symphony’—the expression of a nation’s yearning for freedom. But there is no evidence that Sibelius thought of it in such terms. The few comments he made about non-musical inspiration point in very different directions. Besides the Second Symphony shows Sibelius wrestling as never before with formal issues: how to evolve an organic symphonic argument from tiny motifs; how one movement can grow out of another—as the finale of Beethoven's Fifth Symphony emerges in splendour from the glowing embers of the preceding scherzo.

These were the issues Sibelius was keen to probe further when he began work on his Third Symphony. At the same time he seems to have seen his new symphony as embodying another kind of protest—this time against the excesses of late Romanticism. While Mahler, Strauss and Skryabin assembled vast, colour-enhanced orchestras in their symphonies and tone poems, Sibelius scaled his orchestra down. The Third Symphony is scored for the kind of forces Beethoven or Schumann would have recognised. Gone are the third trumpet, the tuba, the harp and extra percussion of his First Symphony. And while the typical late-Romantic symphony continued to loosen its limbs and stretch out over ever longer time-spans, Sibelius simply pursued greater concentration. He may have been influenced by the ideal of ‘Junge Klassizität’ (Youthful Classicism) of his friend, the Italian virtuoso pianist and composer Ferruccio Busoni, but Sibelius was certainly thinking of Beethoven, whose Fifth Symphony delivers its powerful message in around half an hour.

The Allegro moderato first movement could be seen as a study in economy. The opening theme—quiet but full of potential energy—is presented by cellos and basses alone. Gradually the full orchestra enters as the music builds to a vigorous climax. At its height, trumpets and trombones call out a three-note figure, rising by steps; horns and woodwind take this up another step, and then the cellos enter with a singing second theme. This too builds quickly to a climax, which then fades. After a brief pause for breath, the strings whisper a scale-like figure (marked ppp). The tempo slows, but the atmosphere remains highly charged. From here Sibelius begins to build a long crescendo—one of those passages which show thrillingly his mastery of the art of building climaxes. Bassoon, clarinet and oboe sing the second theme sadly to themselves then, as tension mounts, scraps of the opening theme are heard. At exactly the right moment, the opening theme returns in full to announce the beginning of the recapitulation. Everything is more or less straightforward now until the very end, where earlier motifs broaden into hymn-like lines for horns, woodwind and strings. Then, with an ‘Amen’ cadence, this remarkable movement closes.

If that all sounds rather abstract, the effect is quite different—a reminder of a saying by Sibelius’s great Danish contemporary, Carl Nielsen: ‘Music is the sound of life’. Having demonstrated that he could create a concise, cogent but above all vital symphonic argument, Sibelius now allows more of the sounds of life into the following two movements. The second movement is a slowish nocturnal dance, characterised by muted colours (literally in the case of the strings, who keep on their mutes throughout). The theme emerges gradually out of the pizzicato motifs heard at the beginning on cellos, basses and violas—another example of Sibelius’s ‘organic’ thinking. This dance music alternates with passages of reflective stillness, in which flickers of light never lead to a brighter dawn. Perhaps Sibelius was thinking of those brief days at the heart of the Finnish winter when the sun barely shows itself above the horizon.

The final movement begins like a scherzo. The dancing movement is still prevailing, quietly but much faster. Eventually four ‘stopped’ horns steal in, announcing a new figure, full of mystery and containing echoes of the haunted forestscapes of Sibelius's tone poem Nightride and Sunrise. Just when it seems that the scherzo is going nowhere fast, violas take the shadowy horn figures and turn them into something more assertive akin to a fully fledged tune. Then cellos join the first violas and the tune that is nearly a tune becomes a solid chordal theme in a clear C major. From now until the end of the symphony this theme dominates the music. The mood becomes increasingly energetic until it grows into a triumphant hymn with braying brass and vigorously pulsating strings. But the end is another gesture of masterly economy: a massive three-note figure, G-E-C, is underlined by brass and timpani, then the Third Symphony is suddenly over.