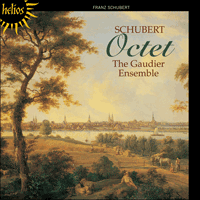 In 1824 it was suggested that Schubert should write a work similar to Beethoven’s Septet (also recorded by the Gaudiers for Hyperion). He subsequently approached the project with such enthusiasm and concentration that a friend wrote of him, ‘If you go and see him during the day he says “Hello. How are you?” and carries on working, whereupon you leave’. Schubert added a second violin to Beethoven’s scoring for clarinet, bassoon, horn, violin, viola, cello and double bass, but adhered to the Septet’s movement structure and key sequences almost entirely. However, the melody and beauty that infuse the Octet are quintessentially Schubert, and justify the work’s enduring popularity.

Here are outstanding performances from an ensemble that draws together some of the most distinguished musicians in Europe.

‘Glowing interpretations—a fine recording … this is a superb performance’ (Gramophone)
‘Glowing interpretations – a fine recording … this is a superb performance’ (Gramophone)
‘Consistently compelling … the poetry, refinement and superb sense of the long singing line are as impressive as ever in The Gaudier Ensemble’s new recording’ (BBC Music Magazine)
‘This is an unusually thoughtful performance, tinged with a melancholy that certainly lies in the music but is also filled with delight’ (International Record Review)
‘This is music that pulls us in myriad of emotional directions and includes some mightily challenging writing. All of this is welcome meat and drink to the excellent Gaudier Ensemble, who play the work with an obviously deep affection’ (The Evening Standard)
‘The playing provides a sublime tension as each of the performers responds to the others’ input with a high degree of intelligence’ (Hi-Fi Plus)
«Son interprétation de l’Octuor est certainement parmi les plus belles de la discographie actuelle, donc chaudement recommandée!» (Créscendo, France)
«L’Ensemble Gaudier façonne une version mémorable» (Classica, France)

Like comparable works by Spohr, Hummel and others, Schubert’s irresistible Octet is a late offshoot of the eighteenth-century tradition of serenades scored for mixed wind and strings. And together with the B flat Piano Trio, D898, it comes closer than any of his other late instru­mental works to the popular image of the companionable, echt-Viennese composer pouring out a stream of spontaneously inspired melody. We owe its existence to Count Ferdinand Troyer, a talented amateur clarinettist who was chief steward at the court of Beethoven’s friend and pupil, Archduke Rudolf. Early in 1824 the count proposed that Schubert write a follow-up to Beethoven’s Septet, which to its composer’s intense irritation had become a runaway success. (When Beethoven learnt of its triumph in England he was heard muttering that the work should be burned.) Schubert duly obliged, adding a second violin to the Septet’s line-up of clarinet, bassoon, horn, violin, viola, cello and double bass, and broadly following Beethoven’s six-movement plan: he likewise prefaced the outer movements with a slow introduction, included both a scherzo and a minuet, and between them inserted a set of variations on a popular-sounding theme.

After visiting the composer some time during February 1824, the painter Moritz von Schwind wrote to their mutual friend Franz von Schober: ‘Schubert has now long been at work on an octet, with the greatest enthusiasm. If you go and see him during the day he says “Hello. How are you?” and carries on working, whereupon you leave.’ Schubert completed the score on 1 March, and the first performance took place at the home of a Viennese nobleman, Anton, Freiherr von Spielmann, later that month. Besides Troyer himself, the players included the renowned violinist Ignaz Schuppanzigh and several others who had given the premiere of Beethoven’s Septet nearly a quarter of a century earlier. Although there was another private performance of the Octet at the home of Franz Lachner in 1826, its first public airing, with most of the original players, was not until April 1827, in the hall of the Vienna Gesellschaft der Musikfreunde. Some contemporary reports found it too long, though the Wiener Allgemeine Theaterzeitung called it ‘friendly, agreeable and interesting’, and ‘worthy of the composer’s well-known talents’—a revealing counter to the old myth that Schubert worked in virtual obscurity, appreciated only by a circle of close friends.

With its melodic and rhythmic elan and its kaleidosco­pically varied colours, the Octet, like Mozart’s great wind serenades, raises the hedonistic spirit of the late eighteenth-century divertimento to a supreme level. Its scoring is endless­ly inventive: at times, especially in the outer movements and scherzo, Schubert uses the ensemble like a small orchestra, with the two violins in octaves and sharp contrasts between solo and tutti sonorities; at others, especially in the Adagio and minuet, string and wind colours are blended with the finesse of true chamber music. If the Octet, in keeping with its diver­timento origins, is fundamentally genial and relaxed, the work is shot through with that sense of yearning, of the evanescence of beauty, that haunts Schubert’s later music; and once or twice—in the brooding coda of the Adagio, or the slow introduction of the finale—we glimpse the dark, depressive world of the String Quartets in A minor and D minor that Schubert composed virtually simultaneously with the Octet.

The imposing, tonally wide-ranging introduction imme­diately announces a dotted motif which is to permeate the following Allegro and influence many of the ideas in later movements. Just before the Allegro clarinet and then horn sound a rising octave figure, again in dotted rhythm, which likewise has echoes later in the work. For all its breezy exuberance, the Allegro itself is tightly argued and unified—reminding us of a much-quoted letter to the painter Leopold Kupelwieser in which Schubert declared that he had composed the Octet and the two quartets of 1824 in preparation for ‘a grand symphony’. The ubiquitous opening phrase of the first theme underpins the second subject, sounded on the clarinet in a plangent D minor and then repeated by the horn in F major. With typical unorthodoxy, Schubert long delays settling in the expected dominant key, C major, which only arrives, with a flurry of violin semiquavers, after protracted ruminations on the main theme. The tautly worked development—so much for Schubert’s supposed prolixity—glides immediately into the strange and remote key of F sharp minor: here the second subject acquires a yearning continuation on the clarinet, and is then transformed more radically, first by the clarinet, then by second violin and viola in imitation, against the pervasive leaping dotted figure on the first violin. After a breathtaking sideslip to A flat major the wind trio intones a chorale-like theme rhythmically akin to the slow introduction; the connec­tion is underlined when Schubert brings back the introduction’s opening phrases just before the recapitulation, reinforcing the close integration of introduction and Allegro. A speeded-up version of the main theme launches the coda, promising a rousing send-off. But then, in a moment of pure romantic poetry, the pulse relaxes for a final, nostalgic reminiscence of the second subject, sounded on the horn as if from the depths of the forest.

The Adagio, somewhere between a barcarolle and a lullaby, is one of Schubert’s loveliest, opening with a dream of a melody for his clarinettist patron and constantly enriched by the composer’s genius for devising ravishing countermelodies. Though the movement is cast in abridged sonata form (without a central development), the abiding impression is of a timeless flow of glorious, almost improvisatory lyricism. After the reprise of the main theme, first on the violin in counterpoint with the horn, then on cello and clarinet, Schubert offsets the lack of a formal development section in dramatic series of modulations. The coda begins serenely enough, with the violins playing in canon; but then a sudden violent off-beat accent for pizzicato cello and bass heralds a weird, disquieting passage where, in a slow crescendo, the clarinet broods obsessively on the movement’s opening phrase over anxiously palpitating strings.

This momentary glimpse of the abyss is summarily banished in the bracing scherzo, a delightfully bucolic movement with overtones of the hunt (and more dotted rhythms)—though amid the alfresco jollity Schubert is always likely to surprise us with sudden shifts to distant keys. High spirits are more subdued in the trio, with its smooth, shapely melody, initially for string quartet alone, over a stalking cello line. For his variation movement Schubert pilfered a cheerful, homely duet from his unperformed comic opera of 1815, Die Freunde von Salamanka (‘The Friends from Salamanca’). Following classical precedent, the first four variations, all rooted to the home key of C major, are essentially decorative, with first violin, horn and cello in turn taking the limelight. But the fifth in C minor—eerie, scurrying night music that pre-echoes the ‘Ride to Hell’ in Berlioz’s Damnation of Faust—and the sixth in A flat, which dissolves the theme in tender, luminous polyphony, are romantic character pieces. Sentiment is wickedly undercut in the final variation, where the winds do a comic take on a village band against a hyperactively cavorting violin.

Like some of Beethoven’s minuets—most famously that of the eighth Symphony—Schubert’s fifth movement is a stylized, faintly nostalgic re-creation of the classical courtly dance. It is surely no coincidence that the initial dotted figure is identical to the pervasive motif of the opening movement. The first section closes with a naggingly memorable cadential phrase featuring both triplets and dotted rhythms; in the second part, after a poetic dip from C to A flat, this is delici­ously expanded by the clarinet before the music dissolves in a chromatic haze. The lolloping Ländler trio (whose opening phrase inverts the minuet’s dotted upbeat) again conjures up village band associations. After a repeat of the minuet the hushed, twilit coda introduces a romantically evocative horn solo that inevitably calls to mind the close of the first movement.

With its ghostly tremolandos, steepling crescendos and labyrinthine tonality, the finale’s introduction creates a scene of high drama. Shades, perhaps, of the Wolf’s Glen in Weber’s Der Freischütz, a favourite opera of Schubert’s. But the doom-laden dotted figures in wind and upper strings also echo the bleak Schiller setting ‘Die Götter Griechenlands’ (‘The Gods of Greece’) which Schubert quoted in the contemporary A minor Quartet. Grand guignol or a personal confession? Whatever the composer’s intent, this introduction is startling in the context of such a generally cheerful work. After the music has sub­sided to a ppp shudder, the tonality clears to a cloudless F major for the brisk, bristling march theme of the Allegro. A smoother subsidiary idea, still in F major, leads to a chirpy second subject (linked to the main theme by its persistent trilling motif) that could have fast-talked its way straight out of a Rossini opera. But the comedy quickly takes a serious turn as Schubert puts the trilling figure through its paces in strenuous imitation. Another plunge from C to A flat signals the development, where the march theme is subjected to tense contrapuntal treatment through an audacious series of modu­lations. Then, after a lull and an exciting protracted crescendo, the recapitulation enters, à la Beethoven, in a triumphant fortissimo.

Schubert reserves his biggest dramatic coup for the closing pages, where the music of the slow introduction crashes in without warning, now made even more ominous by eerie flourishes from the first violin. But the oppressive atmosphere is quickly dispelled by the coda, which speeds up the march theme and transforms it into an increasingly riotous rustic dance.