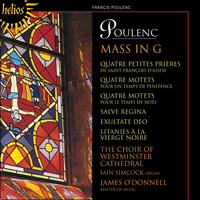 A generous selection of Poulenc’s wonderful and varied liturgical works has been recorded here by Westminster Cathedral Choir, whose natural and unforced style of singing is perfectly suited to the composer’s ‘naïve’, spontaneous outpourings. The Mass in G major is one of the most important a cappella works of the twentieth century, and includes some of Poulenc’s most beautiful and tender music.

‘The Westminster boys display an uncanny empathy with these miniature masterpieces. Their musicianship shines through every carefully measured phrase and dynamic’ (BBC Music Magazine Top 1000 CDs Guide)
‘One of the richest choral experiences of 1994’ (Choir & Organ)
‘A beautiful disc … a performance of the Mass which is utterly captivating … I have to confess to being completely bowled over by these gems’ (CDReview)

The end of the nineteenth century and the beginning of the twentieth was the era of the aesthetic cult. Two important musical groups had already made their impact: ‘Les Apaches’ comprising Falla, Schmitt, Delage, Ravel, Inghelbrecht, Calvocoressi, Vuillermoz and Stravinsky (briefly), the painter Sordes and the poets Fargue and Klingsor; and ‘The Five’, under the leadership of Balakirev—the composers Borodin, Cui, Musorgsky and Rimsky-Korsakov aimed to create a nationalist school of Russian music.

With this background, the imposing Übermensch of German music—Wagner—and the virtual adoration of Belgian-born César Franck by his pupils (‘La Bande’—who came to call him the ‘Pater seraphicus’), it is not surprising that a group of young French composers should formulate their own philosophy. These composers—Poulenc, Auric, Durey, Honegger, Milhaud and Tailleferre—were to become known as ‘Les Six’. It is important to remember that Poulenc was eighteen in 1917 and must inevitably have been highly impressionable. It was through Erik Satie that Poulenc was able to meet many of the artists and musicians in Paris.

Francis Poulenc (1899–1963) first sprang to the attention of Parisian musical circles as a member of ‘Les Six’, so named by the critic Henri Collet. Les Six began to feature together (initially as ‘Les Nouveaux jeunes’) in the same concert programmes in 1917 and they found a ready spokesman in Jean Cocteau who produced his manifesto Le Coq et l’arlequin the following year. This aesthetic document rejected romanticism and demanded that music should be overtly nationalistic and should shun foreign influences, particularly the excesses of Wagner. Negro art, the frivolous music of Satie, the music of the circus and jazz band, the primitive, machines, brevity and straightforwardness were all considered art forms or values worthy of admiration and emulation. Everyday life was considered to be a powerful subject matter by Cocteau; but, despite despising the refinement, sophistication and decorative excesses of the nineteenth century, Les Six enjoyed a ‘gastronomic preference for under-done meat and extra-dry wines’.

Poulenc’s father died in 1917 and with him the young composer’s interest in Roman Catholicism. It was the death of one of his friends that was to lead to a rekindling of his faith and which heralded an important new phase in his creativity—of which all the works on this recording are a product. In Poulenc’s own words:

I am religious by deepest instinct and by heredity. I feel myself incapable of ardent political conviction, but it seems quite natural to me to believe and practise religion. I am a Catholic. It is my greatest freedom. Nevertheless the gentle indifference of the maternal side of my family had, quite naturally, led to a long fit of forgetfulness of religion. From 1920 to 1935 I was admittedly very little concerned regarding the faith.

In 1936, a date of primal importance in my life and my career, taking advantage of a period of work with Yvonne Gouverné and Bernac at Uzerche, I asked the latter to drive me in his car to Rocamadour, of which I had often heard my father speak.

I had just learned, a day or two before, of the tragic death of my colleague Pierre-Octave Ferroud. The atrocious extinction of this musician so full of vigour had left me stupefied. Pondering on the fragility of our human frame, the life of the spirit attracted me anew.

Rocamadour led me back to the faith of my childhood. This sanctuary, certainly the most ancient in France, had everything to subjugate me. Clinging in full sunlight to a vertiginous craggy rock, Rocamadour is a place of extraordinary peace, accentuated by the very limited number of tourists.

With a courtyard in front, pink with oleanders in tubs, a very simple chapel, half hollowed into the rock, shelters a miraculous figure of the Virgin, carved, according to tradition, in black wood by Saint Amadour, the little Zacchaeus of the gospel who had to climb a tree to see the Christ.

The evening of the same visit to Rocamadour, I began my Litanies à la Vierge Noire, for women’s voices and organ. In this work I have tried to express the feeling of ‘peasant devotion’ which had so strongly impressed me in that lovely place. (from Francis Poulenc: Entretiens avec Claude Rostand, Julliard, Paris, 1954)

In 1935 Poulenc began to appear regularly as accompanist to the baritone Pierre Bernac. The composer began to take an interest in the vocal music; from this period to the end of his life, Poulenc wrote many works for solo voice and piano. Prior to this new phase of creativity, Poulenc had written much for solo piano. One of the most frequent markings in his piano scores is ‘avec les deux pédales’, which gives a haze of sound. It is this sound which remains a characteristic of Poulenc’s work both as a pianist and as a composer. He was able to combine this haze of sound with the human voice in his choral music; the reverberation in a large building and the half-muted sounds of the voices in, for example, Quem vidistis from the Christmas motets bear witness to this. Poulenc often uses open, sustained vowel sounds or hummed passages to support a solo line. Examples are to be found in the Agnus Dei from the Messe, and the first, third and fourth of the Quatre petites prières de Saint François d’Assise, scored for unaccompanied men’s voices.

The difficult Messe en sol majeur completed in August 1937 is one of the most important a cappella works to be written this century. It is dedicated to the memory of the composer’s father; the dedication, twenty years after his death, is a testament the depth of feeling hidden inside Poulenc and released through his new encounter with Roman Catholicism. The work is a missa brevis—that is to say that the Credo is omitted. The central section of the Kyrie (at the words ‘Christe eleison’) is one of the most beautiful passages in all of Poulenc’s choral music. This composer is capable of great tenderness in his musical compositions, and this is perhaps demonstrated most clearly in the haunting solo treble line of the Agnus Dei.

It is interesting that some of the musical gestures learned in his youth and through Les Six gain a seriousness in his choral works which is most refreshing: the bass line at ‘Qui tollis peccata mundi’ in the Gloria of the Messe; the frequent use of detaché chords and the whimsical nature of the Sanctus.

The Quatre motets pour un temps de pénitence date from the late 1930s, the texts being taken from the offices for Holy Week, whilst the Quatre motets pour le temps de Noël date from the early 1950s. These pieces all have the same characteristics as the Messe but in the Christmas motets the short phrases show more cohesion within themselves. In Poulenc’s motets there is to be found a marvellous array of moods, from the darkness of Tenebrae factae sunt and O magnum mysterium, through the simplicity of Videntes stellam and Timor et tremor, the richness of Vinea mea electa and Quem vidistis, to the virtuosity of Tristis est anima mea and Hodie Christus natus est.

The two motets Salve regina and Exultate Deo exhibit two contrasting facets of Poulenc’s choral writing: the simple, strict, four-part writing of the former and the complex multi-divisi textures of the latter. Poulenc had a great gift for lyricism, and a typical melody by this composer is often short and accompanied by the words ‘sans ralentir’ in the hope of avoiding a sentimental approach to his music. It is perhaps this aspect of his music which is most appealing: a spontaneous melody, almost naive and free from self-conciousness.

Poulenc’s choral style has been decribed as ‘quirky’. Whilst this may be so, all the music is of a very high quality and all identifiably from the same mould. Similar harmonic twists, melodic phrases and moods are re-used throughout his choral works. Laurence Davies has summarized Poulenc’s genius as follows:

A Parisian with his roots in Touraine, a vulgarian with a connoisseur’s sense of the exquisite, an innocent commuting to and from the infernal regions of art, a practical joker let loose in the temple of the immortals—these and many other paradoxes could be used to describe the man who more than anything else remains quintessentially Poulenc … for the truth is that, within this kingdom of the voice, Poulenc, for all his moon-struck folly, was of the royal line, and his summons will not be denied.