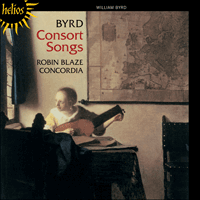 Here is a fine recording to draw the listener into the richly layered world of Queen Elizabeth I. William Byrd’s ‘consort songs’ tell of courtly love; Sir Philip Sidney’s demise in battle becomes an eloquent lament; an old woman tumbling down amid a flurry of human skulls represents contemporary desires for freedom of speech; moral temptations are likened to a storm-tossed ship; and a hymn to the Muses is inspired by the death of Thomas Tallis.

The longest single piece here is Byrd’s famous Lullaby, ‘My sweet little baby’, one of the most popular of his works during the composer’s lifetime, and one which has been a deserving favourite ever since.

Despite Byrd’s domestic-musician-flattering preface in which he claimed these works were designed to persuade ‘everyone to learn how to sing’, this music makes the highest vocal demands: demands far exceeded in the glorious singing of Robin Blaze.

William Byrd has been claimed across the spectrum of political and musical opinion as one of England’s greatest composers. Church music lovers celebrate his liturgical music—as passionate as any Italian ever wrote and far more politically daring in the context of Protestant Elizabethan England—while Marxist critic Ernst Hermann Meyer (in English Chamber Music, 1946) applauded his wonderful instrumental music as an example of art unfettered by bourgeois or royal propaganda. Byrd ‘the romantic Catholic figure’ and Byrd ‘the abstract expressionist’ are both present in his ‘consort songs’, but to these we must also add Byrd ‘the champion of the professional voice’, at a time when singing was supposed to be about ‘Merrie’ English families gathering around the madrigal partbooks.

The preface to Psalms, Sonnets and Songs of Sadness and Piety (1588) sets down reasons ‘by th’auctor to perswade everyone to learne how to sing’. So far so egalitarian, and middle-class amateurs would be flattered into buying the book. But there is a sting in the tail: ‘it is the onely way to know where Nature hath bestowed the benefit of a good voice: which guift is so rare, as there is not one among a thousand, that hath it: and in many, that excellent guift is lost, because they want Art to expresse Nature.’ Byrd’s emphasis on sheer beautiful sound is one of the reasons these songs feel and sound so different from the lute Ayres of Dowland, Campion and others. Instead of localized word-painting and vocal effects serving to highlight particular moments in the text, where the voice becomes a medium for the rhetorical flourishes of persuasion, here Byrd frames his music ‘to the life of the words’ by using the expressive power of the voice itself.

Many of the boy-musicians at court who would become the great composers of the Elizabethan age had been learning the viols since the arrival of Flemish and German string players in the early 1540s. The violin family soon proved indispensable for dance music, while the sweet transparent tone of the viol made it suitable for playing long lines that were more vocal in character. Byrd’s 1588 preface makes it clear that his ‘consort songs’ were to be performed with a single voice for the ‘dittie’, and with the viols providing the ‘harmonie’—standard practice for courtly functions and on the London stage. However, perhaps stung by the commercial failure of his Cantiones Sacrae (1575), he was careful to match the published version to its intended market, and included full text underlay so that the pieces could be performed by voices alone instead of with viols; a wise move since the viol did not become a feature of amateur music-making until the very end of the century.

Psalms, Sonnets and Songs of Sadness and Piety located Byrd within a glamorous circle of courtly poets around Sir Philip Sidney, the artist-hero whose tragic death at the battle of Zutphen became the stuff of legend and inspired national mourning as well as the two ‘Funerall songs of that honourable Gent’ (Come to me, grief, for ever, and O that most rare breast). Both are eloquent laments, the first touching in its simplicity, a tribute from one artist to another, and the second with a deeply felt text by another poet of the same group, Sir Edward Dyer. Byrd chose this form of song for another personal tribute (Ye sacred Muses), this time to a musical mentor, Thomas Tallis who died in 1585. The relationship between these two composers has been well characterized by Davitt Moroney (The Complete Keyboard Music of William Byrd, Hyperion CDS44461/7) as being like that between the older Blow and the young Purcell, or between Haydn and Mozart, combining mutual artistic influence with warm personal ties. Keeping these three songs in mind, one can see the association of the ‘consort song’—a description first coined by William Leighton in his Tears or Lamentations of a Sorrowful Soule (1614)—with grief.

Add this flavour of ‘consort song’ to Byrd’s reputation for ‘gravitie’ and one might expect a dark, not to say miserable recording. Although there are few of the special effects or raucous laughs of other contemporary genres, this is music that demands serious attention; as the composer himself stated, ‘a song that is well and artificially made cannot be well perceived nor understood at the first hearing, but the oftener you shall heare it, the better cause of liking you will discover.’ Byrd wrote this in 1611 (in the preface to his last volume of Psalms, Songs and Sonnets), knowing he was up against the growing popularity of Italian- and French-influenced songs which conjured up the sensational world of the ‘masque’ at James I’s court. He had always assured his public that his songs would ‘content divers humors’ (1588) and were of ‘sundrie natures’ (1589), though it is true that even his strophic dance-like songs sound rather serious. Ironically this is because of his great genius for counterpoint—the accompaniment to songs such as Who likes to love could have been written with a cheery chordal texture, but avoids cadences artfully, never wavering from tightly wrought polyphony.

Byrd’s moral and artistic persuasion was in direct opposition to large-scale courtly grandeur. The 1611 book has links, via one of Whitney’s Emblemes (1586), to Sir Edward Paston, the Norfolk Catholic who was one of his patrons after he moved to Stondon Massey in 1593. The Emblem dedicated to Paston is of the rich man Diogenes who has access to vast lands and riches, but is not as content as poor Codrus, who is ‘ritcher’ for being confined in a small place with small means. In O God that guides the cheerful sun the majesty of the Chapel Royal is captured on a smaller scale, with no loss of triumphant faith.

A Spanish scribe working for Paston’s household produced the beautiful set of lute books that are a major—and in some cases the only—source for Byrd’s later songs. The lute tablature, like Codrus’s tower, contains most of the polyphony in a much more economical form than partbooks. Usually the singing part is omitted, so we are left with complete accompaniments. In some cases, however, the vocal line is present and it is the treble instrumental part which is missing, leading scholars like Stewart McCoy to suggest there may have been self-contained instrumental solos which could be reconstructed if a missing vocal partbook is assumed. These songs belong to the Continental tradition of a strict arrangement of all the parts and feel more like transcriptions of counterpoint than the mix of quasi-improvised chordal accompaniment with counterpoint that characterizes the lute ayres. We include Who likes to love, O dear life, when may it be and Constant Penelope realized in this way. The latter two continue the connection with the poets around Philip Sidney and their preoccupation with Classical themes and metres. O dear life is the exquisite ‘Tenth song’ in Sidney’s Astrophil and Stella sequence. Penelope’s incantation to Ulysses comes from Ovid’s Heroides; Byrd uses the metre of the Latin original to haunting effect, making a much more successful job of the efforts to impose Classical metres on the English language than Sidney, Campion and others managed.

It has been suggested (Matthew Spring: The Lute in Britain, 2001) that a consort of viols playing with a lute was more of a Continental practice than an English one. Given the nature of the Paston books and the Spanish handwriting, not to mention the Paston household’s allegiance to ‘foreign’ Catholicism, it seems appropriate to include a number of songs in which the written lute part is played with the viols, doubling them in the manner of an organ but seeming to eschew florid divisions. An aged dame comes from these books, and uses another emblem where the power of the bizarre image is arguably stronger than the moral it illustrates: an old woman falls down at the top of a hill, skulls rolling down the hillside all around, showing how strange and diverse are the opinions of men. Henry Peacham’s description of the diversity of temptations in London sets the tone for another whimsical moral song, All as a sea—‘Now the city being like a vast sea, full of gusts, fearful-dangerous shelves and rocks, ready at every storm to sink and cast away the weak and inexperienced bark … myself, like another Columbus or Drake … have drawn you this chart or map for your guide …’ (Peacham: The Art of Living in London, 1642).

In his supremely confident Rejoice unto the Lord Byrd celebrated the victories of heroes like Drake over the nations ‘Devoid of peace and quietness’. Byrd experienced the darker underside of Elizabethan culture in the form of increasing religious paranoia and persecution; his manservant was arrested and his wife and daughter pronounced outlaws before they left London. The songs based on biblical or liturgical texts (Ah silly soul, How vain the toils) have a depth of feeling perhaps arising from the soul’s internal struggles being mirrored in the external world.

As revered in his lifetime as he was to be later, Byrd was nonetheless not always fashionable; even the Elizabethans had to be in the right mood to appreciate him. In 1602 the Earl of Worcester wrote about the popularity of country dancing and Irish tunes at court, but he was confident that ‘In Winter, Lullaby [My sweet little baby], an old song of Mr Byrd, will be more in request as I think’. This is an early song (from the 1588 collection) based on an old Christmas theme, and simply a great tune.