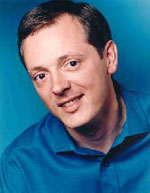 Robin Blaze read Music at Magdalen College, Oxford, and won a post-graduate scholarship to the Royal College of Music, London where he now holds an Associate Professorship. Robin's father is a professional golfer and Robin enjoys a few rounds on the green between rehearsal calls.

Robin's opera engagements have included Narciso in Handel's Agrippina in Karlsruhe, Unulfo in Jonathan Miller's production of Handel's Rodelinda at the Broomhill Opera Festival and Anfinomo in Il Ritorno D'ulisse In Patria at the Teatro Sao Carlos, Lisbon, His busy concert schedule has taken him to Europe, North and South America, Japan and Australia working with many distinguished conductors in the early music field. He has visited festivals in Saintes, Beaune, Karlsruhe, Arolsen, Boston, Utrecht, Jerusalem and Barossa Valley. He regularly appears with Robert King and the King's Consort, Christopher Hogwood and The Academy of Ancient Music, Philippe Herreweghe and Collegium Vocale and Paul McCreesh and the Gabrieli Consort.