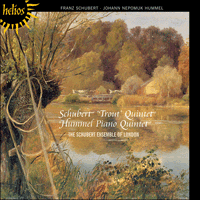 The Schubert Ensemble of London

Schubert’s famous Quintet needs little introduction, and is certainly the most famous work named after a fish. The commission came from Sylvester Paumgartner, wealthy mine-owner by day, amateur cellist by night, who not only suggested Schubert use his song, ‘The Trout’, for a set of variations, but also requested the unusual line-up of violin, viola, cello, double bass and piano. Unusual, but not unique, since Hummel had set the trend with his effervescent E flat Quintet and Paumgartner intended to feature the two pieces together in one of his regular soirées.

Who better to reunite these two quintets than The Schubert Ensemble of London, long acclaimed in music of this era.

In today’s world of concert halls and large audiences, it is often easy to forget that the various forms of chamber music developed as part of a tradition of private performance in the home. The audience—if indeed there was one—would huddle around the piano in the drawing-room to hear their friends or members of their families play music for their own enjoyment. Here was an area of music-making open to amateurs as much as professional players—standards mattered less than the sociable aspect of the events. Distinguished performers were just as likely to meet to play music in this way, as in the case of that remarkable quartet of composers Mozart, Haydn, Vanhal and Dittersdorf who, in the 1780s, used to gather once a week in Mozart’s home to play through each other’s string quartets. What one would give to have been able to eavesdrop on those private ‘concerts’!

A couple of generations later, Schubert’s social life very much revolved around similar musical soirées. These events even attracted their own name among his friends, the ‘Schubertiad’, a term still called upon today to refer to evenings of Schubert’s music.

Steyr, in the Austrian Alps south of Linz, was the birthplace and home town of the singer Johann Michael Vogl, one of Schubert’s greatest friends for whom many of the composer’s more than six hundred songs were written. The musical life of Steyr was organized by a wealthy mine-owner and amateur cellist, Sylvester Paumgartner, whose house was the centre for musical performance in the town. It was during Schubert’s three-month stay there in the summer of 1819 that he commissioned the composer to write a quintet for the unorthodox combination of piano, violin, viola, cello and double bass. This probably reflected both the professional ability of Paumgartner’s musical friends and his professed wish that Schubert should copy the style of Hummel’s Quintet for the same combination.

Paumgartner also suggested the use of a particular song, Die Forelle (‘The Trout’, D550), as the basis for a movement of variations. Schubert had composed this setting of a text by the confusingly named C F D Schubart some two years earlier, in 1817, at the same time as Der Tod und das Mädchen (‘Death and the Maiden’), a song that would later provide the theme for another famous set of variations in his String Quartet in D minor of 1824, D810.

Inspired by his contentment both with the natural environment and his human company in Steyr, Schubert immediately began work on what was arguably to be the most ‘sociable’ of his chamber works. It was completed back in Vienna in the autumn of the same year, 1819, and first performed before the end of the year in Steyr, with Paumgartner himself reputedly making a ‘valiant attempt’ at the cello part.

The ‘Trout’ Quintet was in effect the first of Schubert’s mature chamber works, though it is not immune from a certain formal mechanicalism in places. In the second movement, for example, the second half is, but for the addition of one bar, simply a transposed repeat of the first. The same process occurs even more strictly in the bipartite Finale in which the first half modulates from A major to D major and the second repeats the music note-for-note a fifth higher to bring the movement from E major back to the home key of A. On a local level, however, Schubert’s treatment of tonality shows more of the radicalism for which he is renowned, with sudden switches from major to minor and juxtapositions of keys far apart in the tonal cycle.

The first movement bases itself around the interplay of two main ideas, formed respectively from triplet arpeggios and stately minim phrases. Following the tender Andante is a Scherzo of great rhythmic verve and energy in which the contrast of the string and piano textures is perhaps at its most telling. The fourth movement of this divertimento-like work is the set of five variations on Die Forelle. The melody, hardly changing that much in itself until the fourth variation, is given in turn to the violin, the piano, the viola and the cello. Only with the Allegretto coda does the theme appear with the original accompanimental figuration that represents the brook in the song. This figuration, with its chromatically rising motif, reappears in the Finale as counterpoint to the third main theme in each of the two halves, which both end with the same brief, almost unexpected coda.

Schubert was rare among the many composers working in late eighteenth- and early nineteenth-century Vienna—a veritable musical melting pot at the time—in actually being a native of the city. In the generation before him, Johann Nepomuk Hummel (1778–1837) was one of those composers who followed the more common trend in moving to Vienna to make his living. He in fact came from the next major city down the Danube, Pressburg (Bratislava), and in 1786, at the age of eight, moved with his family to Vienna where he soon became a pupil and great friend of Mozart. His other teachers in the ensuing decade were also two of those with whom Beethoven had studied after his arrival in Vienna four years earlier, the contrapuntalist Albrechtsberger and the operatic master Salieri. Hummel soon began to gain a reputation as a fine pianist, making the obligatory Europe-wide tours as a child prodigy before his talents matured into the creation of an artist who, in his own age at least, was deemed more famous even than Beethoven.

He does not seem to have been a very busy composer from the beginning, most of his music dating from his twenties and thirties when his virtuoso concert career was at its height. Yet his compositional output—much of it still awaiting revival—was a significant contribution to that remarkable period in which the Classical style of Mozart and Haydn was gradually transformed into the early Romantic manner of Weber and Mendelssohn, with Beethoven and Schubert the other great links between these two contrasting musical mentalities.

Naturally, as a virtuoso concert pianist, the bulk of his music was composed for his own instrument, including a number of concertos and a sizeable body of solo piano music. Being the extrovert performer he seems to have been, one would have expected his chamber music with piano to be written with a greater degree of public exposure in mind than were the similar works of Schubert. Yet Hummel’s single Piano Quintet, composed in Vienna in October 1802, is as congenial and sociable a piece of chamber music as anything of Schubert’s before the latter’s intensely personal ‘late’ works. It was not published until 1822 (as his Op 87—a number in no way reflecting its place in Hummel’s compositional chronology) so Paumgartner must have known it in manuscript form when he cited it as an example for Schubert to follow in 1819.

It is in fact quite a Schubertian work, anticipating by at least a decade the later composer’s melodiousness (though in a more Italianate vein), and showing quite a contrast to the more intense and thematically concise style Beethoven was then beginning to cultivate in his great series of ‘middle period’ works (Beethoven’s rise to fame at this time was for a while a big blow to Hummel’s self-confidence). The Quintet is nevertheless a relatively short work—particularly in comparison with Schubert’s Quintet—and unusually, despite its major-key designation, E flat minor is the predominant key, and the one in which the work both begins and ends. In each of its four movements (of which the first is a forthright Allegro, the second a fleeting Minuet and Trio, and the third little more than a Largo introduction to the tempestuous Finale) the piano inevitably takes a leading role and at times extends to passages of virtuosic figuration (such as the slow movement’s final, cadenza-like flourish). But, in its own way this overt pianism enhances a work that is as effervescent as Schubert’s own treatment of the same medium.