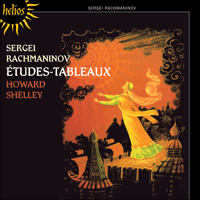 Rachmaninov’s Études-tableaux explore a plethora of colours, textures and sonorites and demonstrate the emotional range of the composer’s expression. Howard Shelley gives authoritative performances of these studies and tackles the technical challenges with an easy brilliance.

‘In Shelley's Rachmaninov series, I think this the finest achievement among them’ (Gramophone)
‘Peerless command and inimitable insights’ (Hi-Fi News)
‘The refinement of the playing reminds one of Rachmaninov's own classic interpretations: few contemporary pianists can equal Shelley's elegant phrasing in pianissimo passages or his imaginative and resourceful use of the pedal. Strongly recommended’ (The Monthly Guide to Recorded Music)
‘The performance, to say nothing of the sound, is transcendental’ (Acoustic Sounds Catalog, USA)

Although Rachmaninov is often regarded as an essentially Romantic composer, a detailed examination of his complete output reveals him to have been a far more complex artist than such a superficial description suggests. The emotional range of his expression was, in fact, surprisingly wide, and his objectivity—the very antithesis of subjective Romanticism—marks him out as an exceptional composer, doubly so for one of his generation and nationality. As a late nineteenth-century Russian, Rachmaninov exhibits some curious features: he had nothing to do with the nationalist movement and he was a world-famous composer whose influence was negligible. A further paradox is that although he was one of the most popular composers of all time the majority of his works remained virtually unknown for decades after his death. Consequently, his work was—and still is, in some quarters—frequently misunderstood. A clue to his true artistic character can be found in one of the rare interviews he gave, for The Étude in 1941, when he said:

In my own compositions, no conscious effort has been made to be original, a Romantic, or Nationalistic, or anything else. I write down on paper the music I hear within me, as naturally as possible. I am a Russian composer, and the land of my birth has influenced my temperament and outlook. My music is the product of my temperament, and so it is Russian music; I have never consciously attempted to write Russian music, or any other kind of music …

Romanticism in music centres upon extra-musical thought, and reached its zenith in the nineteenth century with a kind of obsessive self-regarding individualism, a state of mind utterly alien to Rachmaninov’s restrained and profoundly civilized art. Rachmaninov knew that he was not, at heart, a Romantic composer, as were his great pianist-composer predecessors Schumann and Liszt, yet he did not remain entirely aloof from the movement.

Although it is tempting to consider the Études-tableaux as the epitome of Rachmaninov’s Romanticism in piano music, he was reluctant to reveal any extra-musical programme to them. Such reticence is foreign to the true Romantic, and in Rachmaninov’s case amounts almost to an anti-Romantic stance.

The use of the word ‘tableaux’ is misleading in the present context. Although we know Rachmaninov was inspired by extra-musical subjects in some of them, he said: ‘I do not believe in the artist disclosing too much of his images. Let them paint for themselves what it most suggests.’ The programmes he supplied in 1930 to the Italian composer Ottorino Respighi, who orchestrated five of the Études-tableaux for Serge Koussevitsky and the Boston Symphony Orchestra, seem contrived and full of post hoc justification, without being entirely inappropriate. The ‘tableaux’ are not first and foremost ‘pictures’ in the Musorgskian sense, rather are they successors to Chopin’s Ballades in that they permit poetic interpretation whilst at the same time being composed entirely from musical (and also technical) ideas. The ‘character’ of each piece is dictated by the material, and it is the ‘character’ which is the ‘tableau’.

The first set, Op 33, followed immediately upon the thirteen Préludes of Op 32, being written before the Préludes were premiered. Thus they follow a succession of large-scale masterpieces: two operas, the first piano sonata, second symphony, the symphonic poem The Isle of the Dead, the third concerto, the Liturgy of St John; and after this exclusive concentration upon big works during almost the whole of the previous ten years, Rachmaninov doubtless felt the need to express his compositional mastery and newly developed artistic strength in works of the smallest scale. He found the task exceptionally difficult, as it ‘presented many more problems than a symphony or a concerto … after all, to say what you have to say, and say it briefly, lucidly, and without circumlocution is still the most difficult problem facing the creative artist.’ Rachmaninov composed nine Études-tableaux in 1911, but they were not published until 1914, when three were removed—the original No 3 in C minor, No 4 in A minor and No 5 in D minor. Of these, No 4 was revised in 1916 and incorporated (as No 6) into the second set (Op 39), which was written between September 1916 and February 1917. Nos 3 and 5 from the first set remained in manuscript and were found after Rachmaninov’s death, being ultimately published in 1948 when they were reinstated as parts of his Opus 33. As a result, the form in which we hear the first set of Études-tableaux today is one which was unknown to the composer, and goes against his express wishes. Whilst it is generally conceded that Rachmaninov’s first thoughts are almost invariably preferable in regard to those works which he subsequently allowed to be cut (second symphony, The Isle of the Dead, third piano concerto—consecutive works), his Opus 33 presents an insoluble problem: do we restore the C minor and D minor pieces to their original place, or do we play the set in the first published form? As the question did not arise during Rachmaninov’s lifetime, we have no direct evidence, but there is a curious connexion between the two previously unpublished Études: they both use material from other works.

In April 1914 Rachmaninov revealed he was working on a new concerto (his fourth). It was uncharacteristic of him to announce work in progress. The war interrupted the concerto, and the work did not appear until 1926. The opening of the concerto, and a subsidiary theme in the slow movement of the same work, were both—as Geoffrey Norris has pointed out—taken from the discarded C minor Étude. The D minor Étude is based on material from the first movement of the first piano sonata (1907). At the suggestion of Konstantin Ignumnov, Rachmaninov excised fifty bars from the movement before publication: it must have been that Rachmaninov constructed this Étude from the music he discarded from the sonata. And so it is likely that the two unpublished Études-tableaux, using material already in hand for other works, were withdrawn by the composer for this very reason. A further point is that the six as originally published give the impression of a Schumannesque organic unity, akin to the procedures of Schumann’s Études symphoniques: there are melodic-cellular connexions between the six which the C minor and D minor do not share.

It is possible to discern a more elliptical, laconic manner in Rachmaninov’s post-Revolutionary works, and this change of emphasis is already apparent in the Études-tableaux. As we have seen, Rachmaninov admitted that such brevity presented him with considerable compositional problems, but, apart from their brevity, these pieces are virtuosic in the extreme. They make cruel demands of unconventional hand positions, immense physical strength and energy from the player and, combined with the impacted character of each piece and the often wide leaps for the fingers, such problems place these works outside the scope of any but the most formidable virtuoso technique. Rachmaninov’s Études-tableaux mark the virtual end of the nineteenth-century tradition of virtuoso writings of the great composer-pianists.

In addition to their unique qualities must be mentioned their unusual harmonic language, already foreshadowed in parts of the third concerto: modal harmonies and melodic characteristics can be frequently found in the Études, together with the absence of the third in the traditional major and minor modes; the flattened seventh, and Rachmaninov’s use of thick chordal clusters in contrary and parallel motion. These features account for the less obviously ‘Russian’ nature of the music, placing the composer more firmly in the Central and East-European tradition. The Études-tableaux of Opus 39 were the last works Rachmaninov composed in Russia.

Detailed comment on each piece is unnecessary, but note particularly the modal aspect of the melody in Op 33 No 1, and how the quiet ending of this piece is echoed in the opening of No 2, being a variation upon it, and how this is carried through the remainder of the set. The final C sharp minor is almost a parodia of the most famous of Rachmaninov’s Préludes. Op 39 can also be perceived as a hidden set of variations on this composer’s idée-fixe, the Dies irae, parts of the plainchant being quoted directly in all of the nine studies, particularly obviously in the first five. The Dies irae is quoted in Rachmaninov’s Isle of the Dead, which was inspired by Böcklin’s painting, and Rachmaninov claimed two other Böcklin paintings, ‘The Waves’ and ‘Morning’, were the inspiration behind the first and eighth respectively.

One final point on the entire collection is the vivid rhythmic life of the music: at times virile and commanding, at others subtle and understated, it is an aspect of Rachmaninov’s compositional skill which helps to ensure the immortality of his music.