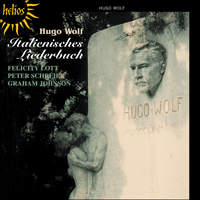 ‘An artistically consummate performance. These musicians bring an immediacy and intimacy, to both text and music, which is thrilling’ (BBC Music Magazine Top 1000 CDs Guide)
‘If I had to live with only one Italienisches Liederbuch, it would have to be that belonging to Lott, Schreier and Johnson’ (BBC Music Magazine)
‘No accompanist, not even Gerald Moore himself, has revealed quite so profound an understanding of this cycle as Graham Johnson, and with two of his favourite Lieder singers he conjures up a performance full of magic, compelling from first to last’ (The Penguin Guide to Compact Discs)
‘An exceptional recording’ (The Independent)
‘Artistically consummate’ (Classic CD)
‘A memorable achievement in every way … lovingly and vividly brought to life by three superb artists, with a recording that for warmth, clarity and unaffected directness matches the achievements of singers and pianist. We are closer to perfection here than we have any right to expect’ (Hi-Fi News)
'Una edición magnifica por presentación e interpretación' (CD Compact, Spain)

When we encounter this work for the first time, we discover a new song landscape – a delightfully hybrid country where Italian folk earthiness is wedded to the highest German art. Wolf had already proved himself a giant of the lied in his settings of Mörike (1888), Goethe (1888/9) and others, and he had long been adept at inspired syntheses of word and tone. But by 1890 the composer had reached a phase in his life where he no longer needed the monumental grandeurs of German literature to achieve his ends. He had already turned his gaze south to the Mediterranean; the songs of the Spanisches Liederbuch strike a new hedonistic note in his work. But the surprise of the Italienisches Liederbuch (translations by Paul Heyse of essentially anonymous folk lyrics drawn from collections by Tommaseo, Tigri, Dalmedico and others) is that the composer also delights in the joys of Lilliput, and ‘Auch kleine Dinge …’, the opening song in the set, is the very work to declare his new miniaturist sympathies.

The song microscope (an instrument yet to be invented by science but long at the disposal of Wolf enthusiasts) shows that the amalgam of music and poetry which is the Italienisches Liederbuch is a volatile substance teeming with frantic activity, unguessed-at by the many, invisible and inaudible to the uninformed ear and eye, and yet hugely colourful when viewed through the right lens and heard through the right amplifier. Multitudinous protons and neutrons jostle within even the simplest of song texts, and Wolf at the height of his powers, in Einsteinian fashion, knew how to harness the secret power of these atoms of poetry to create a music of explosive power – music which belies its modest dimensions. The intense human activity of an Italian village is mirrored by a parade of the tiniest and most subtle musical devices and inflections seemingly with lives of their own, and with the sophistication and the inevitability of living organisms. The people depicted in Heyse’s collection are atoms of society, part of a bustling and vibrant community, yet somehow anonymous in that their behaviour in love – or when angry, spiteful, or laughing – is archetypal, as repetitive and inevitable as life itself. And as a result of the composer entering into the spirit of these words in the most profound way, there is in this combination of music and poetry a timelessness which places the work far beyond the realms of nineteenth-century song and Italian pastiche.

The work is about patterns of life – ever changing, and yet ever the same. A celebration of these living litanies in Wolf’s hands is no less than life-enhancing. We hear what is going on beneath the surface to such an extent that we do not stop to ask whether these rispetti are contemporary with Cosimo de Medici, Vittorio Emmanuele or Mussolini. A staged and costumed Italienisches Liederbuch would thus reveal nothing that we cannot already hear in the music; the point of Wolf’s writing is to lead us deep into the poetry with the smallest number of extraneous distractions. The banalities of mere story-telling are transcended by a scenario which needs no lighting because it is brilliantly lit from within; it needs no mise-en-scène because it is bound together by the variety and unpredictability of life itself. The composer himself is the conductor, for he left the performers more than enough detailed instructions to remain firmly in charge. Of the cast of three, the pianist is rooted firmly to the spot, hopefully in front of a better instrument than could ever be found in an Italian village, and the other two alternate in song without ever combining their voices in duet. Only once, or possibly twice, does the composer permit them to address each other directly. Many an opera lover would find this a distinctly unpromising recipe for an evening’s entertainment. And yet if we use our ears and listen to our hearts we have to declare that here is a triumph of the lied over the operatic form sacred to the real Italians. This is only one of the delicious paradoxes of a work, so small and yet so large, so complex yet so simple, which is one of the enduring masterpieces of the civilized world.

Wolf never heard both parts of his Italienisches Liederbuch together, although a letter of October 1893 to Dr Strecker in Mainz shows that a complete performance of the work – at a time when only twenty songs existed – was planned. Although this plan never came to fruition, the work is comparable to Schubert’s Winterreise in that both composers and their friends seem to have regarded Book I of their respective cycles (a halfway house in each case) as finished works worthy of performance in their own right.

The absence of a performing tradition of the Italienisches Liederbuch in the composer’s own lifetime has given later performers carte blanche in deciding a performing order for the songs. This has been encouraged by the publication of a Wolf handbook by Edition Peters in which various running orders are suggested, and by the late Erik Werba who also concocted and published a number of different sequences, some of which have been recorded. Countless singers and pianists have had a great deal of fun shuffling the songs to make connections between them on the basis of ‘she said to him’ and ‘he then said to her’. The enjoyable thing about this is that the work can seem subtly different each time, but there are also a number of dangers. It seems a mistake, for reasons outlined above, to attempt to operaticize Wolf’s cycle (it has been ‘staged’ in American music colleges more than once), but it is also important to acknowledge that the ‘cycle’ is in fact two separate works, one completed in 1891 and the other in 1896. Greater stylistic differences (and much more time) separate these two books than separate the two books of Winterreise. The second Italian set has a different mood and certainly a different style of piano accompaniment. As the work is usually given with an interval, it seems only wise to allow those twenty minutes to stand for the five-year gap between the two groups of songs.

When Felicity Lott, Richard Jackson and I performed the work for the first time (at the Purcell Room, London, in October 1975, in honour of Flora Nielsen’s 75th birthday) I devised an order which mixed the two parts unmercifully, grouping songs under sub-headings taken from Tommaseo’s Canti Toscani – one of the sources of Heyse’s translations. Thus the songs were arranged together under ‘L’amore ineguale’, ‘Serenate’, ‘Preghiere e rimproveri’ and so on. This seemed a good idea at the time, but I am now convinced that the composer knew exactly what he was doing when he made his own order for publication. For each of the two books Wolf chooses a wonderful motto song, and for each of them a high-spirited virtuoso finish. Throughout there are subtle juxtapositions of key, metre and tempo to provide contrast and relief, except where the composer wishes to suggest a link when certain songs seem to glide into each other.

It was the late Walter Legge who impressed on me (during long sessions with my young colleagues in 1975 as well as with Schwarzkopf in 1976) that of all composers Hugo Wolf was master, if not of his own sad destiny, then of his songs. His relationships with publishers were fraught with difficulty precisely because he was so punctilious about the exact pagination of his music. If he had a recital programme printed he supervised each detail of it, including the flowers which embellished the foot of each page. His relationship with singers (whom he regarded as mostly stupid) was always tense because he demanded absolute fidelity to his intentions. He was unquestionably a tyrant in matters musical and Legge continued this tradition with great relish, arriving at my door to coach the young team with a cigar in one hand and a metronome in the other, both instruments of torture in their various ways. I am extremely grateful to him now, however, because he showed us that, in terms of his own music, Wolf knew best. No other composer has left so many detailed instructions (including metronome marks) for a set of songs; to obey Wolf’s dynamics and tempo indications as far as possible (far easier said than done) is to obtain the best results on the concert platform. Having come to admire the way that the composer is able to ‘rule from the grave’ (something that I believe was his intention as far as his songs are concerned) it is inconceivable to me that, having been composed with immense effort and superhuman care, the songs of the Italienisches Liederbuch were thrown together in an arbitrary sequence on the whim of the moment, and without that careful thought and intention which is the Absicht of the obsessively controlling artist. In the composer’s own order, which on the whole eschews quasi-operatic resonances of dialogue and cute response, we hear the kaleidoscope of village life (rather than see it) and our ears are encouraged to listen to all the riches which lie beneath these serenades, laments and dramatic confrontations. This is the way the composer carefully planned to present his work to posterity.

I confess to one departure from this which I think has a certain musicological validity. The ‘hatching’ of a work like this on a stop-go basis with gaps of years and a sudden deluge of creativity is highly fascinating. I have presented a performance of the cycle in Wigmore Hall, and again at the Walton Estate on Ischia, in which the songs were performed in the order in which they were composed. They were linked by readings from the composer’s letters to friends which showed the various moods of elation and depression which governed the work’s genesis. This order has the advantage of course of not mixing songs from the two periods. We were denied the excitement of ‘Ich hab’ in Penna …’ to end the evening, but had the hauntingly beautiful (and also appropriate) ‘Was für ein Lied …’ instead. Presenting an evening like this shows the cycle as ‘work in progress’, but I remain convinced that the best order for a recording is the composer’s own.