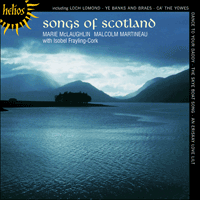 Scotland's own Marie McLaughlin, celebrated in opera houses throughout the world, sings 33 delectable songs from her native land. Many favourites are here, from Loch Lomond to The Skye boat song, but also some less well-known songs, both merry (The white cockade, O Willie's gane tae Melville castle) and sad (The winter it is past). Two are sung unaccompanied (The flowers of the forest, My love's in Germany) and several are sung with the clarsach—the Celtic harp.

Full texts are included along with interesting notes by John Currie.

‘Marie McLaughlin sings with warm tone, affection, humour and zest’ (Gramophone)
‘Marie McLaughlin's gleaming yet often dark-hued soprano takes to this music as to the bothy born; and Edinburgh-born Malcolm Martineau heels and toes it with great imaginative finesse, tuning in to the physical essence of each song, be it the springing heather tread of the high road and the low road, or the mesmeric oscillations of a lullaby from Barra’ (BBC Music Magazine)
‘Marie McLaughlin sings these songs in a clear, unpretentious soprano, evidently delighting in the texts, which she delivers in a pleasing, crystalline brogue. An exquisite disc’ (International Record Review)
‘McLaughlin sings with passionate intensity, and her voice has all the colors of the rainbow for these widely varying songs … an album to treasure’ (Fanfare, USA)

The folksong, in its broadest sense, gives an insight into the humour, politics, and deepest longings of a nation. The Scottish repertoire is peculiarly rich. The fusion of Celtic and Lowland cultures, the nation’s troubled history, and an irreverent sense of fun mark many of the songs. It is interesting that from a nation so often torn by religious strife there has emerged this vast library of purely secular songs whose themes range from passionate love and war to hilarious nonsense.

Love and war dominate. These are themes we expect in the songs of any country. But the mixing of these themes so often within one song is very Scottish. My love’s in Germany, The white cockade, Loch Lomond and The bonnie Earl o’ Moray are, at one level, songs of love, or lost love, yet here also are politics, assassination, court intrigue, and the sad fate of the Scottish mercenary. Less complex are The flowers o’ the forest, the lament for Scotland’s dead after the Flodden defeat, The Skye boat song, a Jacobite song of devotion and nostalgia, and The Queen’s Maries, part of a longer, gory ballad of jealousy and intrigue from the point of view of the victim, Mary Hamilton. Also less complex, and more cheerful, are O Willie’s gane tae Melville Castle and The keel row. Scots lads were forever mustering at the local laird’s to go to war, or returning by sea. Boots, spurs and a fine uniform never failed in their appeal. Scots wha hae, a pure war-song by Robert Burns, is the imagined speech of Bruce to his troops before the Battle of Bannockburn (1314).

If love and war are dominant, so is Burns. It is well known that he was a songwriter of genius, maker of the words of some of the world’s best-known songs. Less well known is his status as a collector and re-moulder of older lyrics by the hundred. The finest national collection, The Scots Musical Museum, is largely his work, both as editor and original lyricist.

This recording includes three delightful lighter Burns love songs: O, whistle and I’ll come to you, my lad, Comin’ thro’ the rye and The gallant weaver. The spiky, strutting style of the melodies, probably old fiddle tunes, underlines the perkiness and innuendo of the first two. (The wide vocal range of many older Scots songs comes from a fiddle background.) The song about the weaver catches beautifully a girl’s simple innocence and optimism, as does Kind Robin lo’es me, an anonymous song included by Burns in the great collection. And we find the same warmth, happiness, and pastoral bliss in Bonnie wee thing, A rosebud by my early walk, and the haunting Ca’ the yowes.

Less happy are those unmatched love-songs by Burns which end in pain: Ye banks and braes o’ bonnie Doon with its sharp thorn; the death-knell ending of The winter it is past, ‘A woe that no mortal can endure’.

The selection also includes two nineteenth-century ballads inspired by older poems in that form. Scott’s Jock o’ Hazeldean draws on Borders lore, while Baroness Nairne, one of a clutch of fine Scottish women writers, immortalized a cannie laird in her strutting setting, The Laird o’ Cockpen.

If it is true that the songs of love and war transcend national barriers despite the Scottish tongue and the rich, but distinctly local, nature imagery, it is also true that there are many others which can only be described as domestic, yet still stand out as good songs by any standard. There’s nae luck about the house (‘the wanderer returns’ theme again) is a riot of domestic bustle and happy anticipation of the footstep on the stair. The wee cooper o’ Fife is comic domesticity from a more primitive tradition, with its nonsense refrain, old-fashioned wife-beating, and a tune shot through with laughter. Equally domestic are The tocherless lass, with its touching denial of the traditional power of the dowry, and Baroness Nairne’s fine nostalgic evocation in The rowan tree of home and family, now gone for ever.

Many Lowland Scots songs have melodies which are Highland in origin, but in a special class in this recording are songs which are purely Highland or Island, but given in English translations to widen their appeal nationally and internationally. Marjory Kennedy-Fraser was the great pioneer of this genre, furnishing her beloved island songs with piano accompaniments which recall the harp and clarsach, surrounding them with an ambience and magic too often glibly dismissed as ‘Celtic twilight’. She seems too, to this non-Gaelic speaker, to avoid any false grandeur in translating the poetic complexities of the original. The cockle gatherer, A fairy’s love song, An island sheiling song and the familiar An Eriskay love lilt give a flavour of her remarkable work. The last, a work-song, verges on the ‘mouth music’ tradition of the Gaels (meaningless words for dancing when instruments were banned or unavailable). This mouth-music tradition is also obvious in Dance to your daddy. Sir Hugh Roberton’s arrangements are at one further remove from the original in that the Highland tune is sometimes supplied with new words of his own (The fidgety bairn, Air falalalo) whereas in Moffat’s Hush-a-ba, birdie, croon, croon one suspects that the lyric is a translation of an original.

What binds together these songs from many strands of Scottish culture is the sheer beauty of the melodies and the skill with which lyricists like Burns could match new or re-modelled words to traditional tunes. Most of the composers are anonymous, but that diminishes their genius not at all.