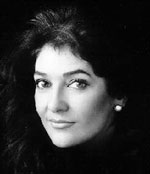 Marie McLaughlin is one of the world's leading operatic sopranos. Her international successes have included Susanna at the Salzburg Festival, Geneva, New York’s Metropolitan Opera and London’s Royal Opera House, Zerlina, Susanna and Ilia (Idomeneo) at the Vienna State Opera, Donna Elvira at Glyndebourne. She appears regularly in Hamburg, Berlin and Munich.

Other notable interpretations include Gilda in Jonathan Miller's controversial production of Rigoletto for English National Opera, Micaela at Glyndebourne and Covent Garden, Violetta at Glyndebourne, and Marzellina also at Covent Garden, Salzburg and the Met. Her appearances in Rigoletto, La Traviata, and Carmen are all available on video.

Marie McLaughlin has appeared in concert with the world's greatest conductors including Bernstein, Haitink and Sinopoli and has recorded some of her finest roles, notably Zerlina in Don Giovanni with Sir Neville Marriner for Philips, and Despina with James Levine for Deutsche Grammophon.

Miss McLaughlin is married to an artist and lives in southern England. They have two sons and a dog.