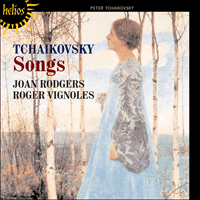 ‘Any reviewer would have to comment on the beauty and poise of Joan Rodger's near flawless singing, Roger Vignoles's sensitive accompaniments, the excellent, nautral sound … this is a lovely album of Tchaikovsky songs’ (American Record Guide)
‘A lovely record’ (The Sunday Times)
‘I find this British singer's identification with Tchaikovsky almost uncanny. Having heard countless performances … in my native Russia, I was totally overcome by Rodgers' unaffectedness and sincerity … Her intonation is faultless, her Russian excellent. A rare treat indeed’ (Vladimir Ashkenazy)

Perhaps there still lingers a suspicion that Mussorgsky is the only major Russian song composer. True, no one is likely to place Tchaikovsky in the same league as, say, Schubert or Wolf, but his hundred or so songs add up to a corpus of work far more significant than our neglect of them might suggest. It is also a corpus in the strongest contrast to Mussorgsky’s, for whereas that brilliant but rough genius possessed an extraordinary capacity for capturing a person’s inner being through the vivid, sometimes startling projection of his external traits, Tchaikovsky probed directly into the human soul to expose its desires and passions, its joys and sorrows, its tenderness and its vulnerability. Details normally mattered little to him; it was more the general mood that he aimed to project, and he favoured verses concerned with strong, personal feeling, which he might set as ‘lyrical declamations’. Much responsibility is placed upon the singer as interpreter, the pianist affording support and continuity, and sometimes crucial expressive amplification.

The first song in this recital, Last night was so bright Op 60 No 1, exemplifies his style perfectly. The piano briefly anticipates the opening vocal phrase, then passes to rippling figuration as, in gentle ecstasy, the singer enters. Musically it could all prove charmingly acceptable—and little more. But Tchaikovsky knows how to make the music ebb and flow through varying the phrase lengths, how to enrich with quietly arresting shifts of key, how to build telling climaxes. This song grows largely from a single melodic idea; even more so does the next, To forget so soon (1870), though here the constant recurrences of the brief source phrase drive home the pain within the text. The strength of feeling is substantiated by the sudden move to a tempestuous Allegro for the final verse—and even more by the singer’s brief, disconsolate intrusion into the piano postlude. But in The nightingale Op 60 No 4 it is the drooping four-note figure from which so much of the vocal part is built that holds the song together musically, and contributes so tellingly to its mournful mien. It would have been tempting to exploit the obvious musical potential within the nightingale’s song, but this is reserved discreetly for the piano’s brief rejoinders to the singer’s phrases; to have done more might have compromised the sorrow within this song of disappointed love.

The twelve Opus 60 songs, composed in tribute to the Tsar’s consort, date from 1886, the six Opus 38 songs from 1878. It was in early spring Op 38 No 2 is an expression—mostly joyous, yet moderated by gentleness—of young love recollected, while At the ball Op 38 No 3 is a wistful reflection upon the momentary sight of a beautiful woman glimpsed across a crowded ballroom. This gentle waltz-song is one of Tchaikovsky’s most haunting romances, the singer’s flexible opening phrase recurring irrepressibly, as does the melancholy image of the young woman in the imagination of her adorer. In The fearful minute Op 28 No 6 (1875) the torments of the lover desperately awaiting his beloved’s answer are straightaway caught in the urgent opening dialogue on a tiny but tense melodic fragment. Often Tchaikovsky (who in this instance is his own poet) will simply repeat the piano prelude to close a song tidily, but this time it is the singer’s pitiful ‘Answer me quickly!’ that the piano pointedly reaffirms. So also in Do not believe me Op 6 No 1 Tchaikovsky fastens upon the singer’s opening phrase, returning to it to link the first two verses, allowing it to break importunately into the second verse’s centre, then finally to round off the whole song.

Rarely do we think of Tchaikovsky as possessing a sense of humour. How wrong we can be! The cuckoo Op 54 No 8 is a delicious morsel, one of Sixteen Children’s Songs, nearly all composed in a fortnight of furious activity in 1883. The arch simplicity of the parasite’s questions, the starling’s garrulous, mortifying replies—all lead to a hilarious end of frenzied ‘cuckoo’ rage. Similarly, I was a little blade of grass Op 47 No 7 (1880) exposes a less familiar side of Tchaikovsky: that of the mildly nationalist composer. But while this plaintive, sometimes full-throated, lament tells of a young woman’s bitter sadness, Cradle song Op 16 No 1 (1873), dedicated to Rimsky-Korsakov’s wife, reflects perfectly a young woman’s deepest joy. It is one of Tchaikovsky’s loveliest songs; clearly the news that the recently married couple were expecting their first child had affected him deeply.

One of Tchaikovsky’s closer friends in his later years was the Grand Duke Konstantin Romanov. The Grand Duke was both a musician and a poet, and Tchaikovsky’s Opus 63 songs (1887) set six of his poems. The situations in Serenade Op 63 No 6 and At the window, in the shadow Op 60 No 10 are the same: a young man woos his beloved from beneath her window. But there the parallel ends. In At the window, in the shadow a budding Don Juan applies all his varied musical caprices to tempt his beloved to him (even mischievously ending out of key; business for him is, as yet, unfinished); in Serenade the Grand Duke’s more decorous swain, innocent of improper intent, sustains a charming flow of the happiest melody. But if this song could almost have come from Schubert, the idiom of The canary Op 25 No 4 (1875) originates in the East; it is one of Tchaikovsky’s rare ventures into the Russian musical orient, making much use of augmented intervals and tiny arabesques.

Tchaikovsky once facetiously attributed his habit of issuing songs and piano pieces in sets of six, or multiples thereof, to one of his bitches’ habit of presenting him with litters of six puppies each time. He had set the precedent with his first set, Opus 6 (1869), which deservedly remained one of his most popular (four of the six songs are included in this recital). Not a word, my friend Op 6 No 2 follows Do not believe me in repeating the opening verse at the end to produce a rounded musical structure, and this became a not uncommon practice with Tchaikovsky. And just before this wholesale repetition, the disconsolate reiteration of the concluding phrase of the central section makes for one of the most affecting moments in this affecting song. But songs for children have no place for such mature emotions; except for the minor key there is no unease in the engaging Lullaby in a storm Op 54 No 10, and only forthright joy in Spring Op 54 No 9.

Why did I dream of you? Op 28 No 3 (1875) is another song haunted throughout by a single melodic idea, here as irrepressible as the image that has lodged in the lover’s memory. The singer’s opening is almost an anticipation of the prelude to that most poignant tale of disappointed, tragic love, Eugene Onegin (1877); not infrequently in Tchaikovsky’s earlier songs, the world of Tatyana, his greatest, most touching heroine, seems to be pre-echoed (indeed, this very same prelude opening is even more clearly foreshadowed at the climax of The canary). But it is the love theme of another of his supreme masterpieces, Romeo and Juliet (first version, 1869), which seems to have conditioned the melodic outpouring of Only one who knows yearning (also known as ‘None but the lonely heart’) Op 6 No 6. This has always been Tchaikovsky’s most famed song. But there is a problem; it would seem that in translating from Goethe’s Wilhelm Meister, Lev Mey assigned this lyric to the Harper, not Mignon, since the Russian text is clearly for a man. No matter: the tremulous intensity of feeling is surely Mignon’s, nowhere more so than when, after the dynamic climax has been abruptly silenced, the piano slides in beneath her vocal part, leading her back to her opening words and towards the song’s end.

Tchaikovsky’s friend from schooldays, Alexei Apukhtin, who had provided the lyric for To forget so soon, is also the poet of By day or by night Op 47 No 6. A slow introduction that dimly foreshadows themes to come leads to a full-hearted outpouring of love, celebrated sonorously in the extensive piano coda. Introduction and coda are yet more critical in If only I had known Op 47 No 1, representing as they do the young horseman whose appearance prompts the girl’s outpouring, but who finally passes from her sight, having played no more part in her monologue of longing than in her life itself. This is one of the most deeply felt of Tchaikovsky’s songs. So too is Why? Op 6 No 5. In both, the sense of accumulating feeling is powerfully caught—but the ends are so different, for while wailing despair marks the young girl’s last sight of her departing horseman, the piano postlude of Why? surely suggests a kind of resignation.