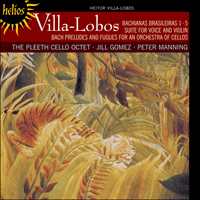 ‘Stunning performances’ (BBC Record Review)
‘The interpretations are passionate … and what a voice … Gomez is equal to the best who came before her. Her light, agile, soaring voice rises ecstatically above the massed cellos’ dusky rain-forest wall of sound like the brilliant plumage of some rare Amazonian bird-in-flight … thoroughly captivating’ (American Record Guide)

When Villa-Lobos alighted at the north Brazilian port of Recife in June 1930 from France his intention was to leave Brazil and return to Paris as soon as he had fulfilled a series of conducting engagements. Political circumstance, however, forced a change of plan. The October 1930 revolution which brought wily gaúcho Getúlio Vargas to power, overthrowing the crumbling and self-satisfied Old Republic and initiating fifteen years of autocratic though benign dictatorial constitutions for Brazil, meant that it was temporarily impossible to export currency from the country. Villa-Lobos was unable to pay the rent on his Paris apartment and he was evicted in absentia together with various belongings, including the now lost autograph scores of Chôros Nos 13 and 14.

Perhaps he already had an inkling that his heady Parisian days were over. Even before the revolution Villa-Lobos was initiating musical activity in São Paulo city, and soon after the coup he was planning an extensive tour of the state with several colleagues, the ‘Excursão Musical Villa-Lobos’, with the avowed aim of elevating the musical consciousness of the people by bringing to them recitals of erudite compositions. This nine-month tour was only interrupted by the organization in May 1931 of a large choral rally, the ‘Exhortação Civica Villa-Lobos’, in which 10,400 paulistas sang patriotic songs and hymns (mainly in arrangements by Villa-Lobos) in the open air. These two projects were the stunning prototypes of much similar activity by Villa-Lobos during the following fifteen years. Most of his compositions were, directly or indirectly, aimed at public artistic education and tacitly requesting instant approval, or were plainly and unashamedly patriotic, carrying clear political messages. In many cases this all amounted to the same thing.

Despite his activity in São Paulo state it was an offer from the administration of the Federal District in February 1932 to become head of a specially created department, the Superintendencia de Educação Musical e Artistica, which meant that Villa-Lobos was able to return finally to his home, Rio de Janeiro, to work. The showcase for his compositions increasingly became the political arena, either in the form of choral rallies (concentrações civicas) held on significant national days under blazing tropical sun, or as ‘artistic education’ concerts in which musical culture was fed to the people in an informed and organized way, unknown in the capital until this time. Throughout the 1930s the public was not only able to hear the best (and other) compositions of Villa-Lobos and his contemporaries in concert series sponsored by the government, but also to attend Villa-Lobos’s proudly presented Brazilian premiere performances of Beethoven’s Missa Solemnis (1933), Palestrina’s Missa Papae Marcelli (1933), Bach’s B minor Mass (1935), and other standard works.

The pioneering and fevered activity and ferment of Modernism in Brazil during the 1920s, which resulted in the development of a vibrant intellectual ambience, a lingua franca, gave way in the 1930s to a more ordered, more classical, though no less enthusiastic exploration of everything Brazilian. The way was opened for the creation of huge national encyclopedias, dictionaries, series of cheap books which explored every aspect of the national heritage, Brazilian-made films, the foundation of orchestras and choirs, theatre, and scientific research. Perhaps it was because of his direct involvement with both the Brazilian and European musical legacies, and the sudden need to compose music playable and acceptable by untrained and uninitiated students or concert-goers, but the raw, strident and direct nationalism of the 1920s likewise disappeared abruptly in Villa-Lobos’s compositions after 1930, to be replaced by an idealized, mellow, and mature depiction of national antiquity. The pure, arching lines of the a cappella Missa São Sebastião (1937, recorded on Hyperion CDA66638), for example, have their origin in the hispanic polyphony of Victoria, and the simple beauty of the archaic Portuguese song form modinha is exploited exquisitely in Modinhas e canções (1933–43), modern interpretations of Iberian and old Brazilian moods and material.

The remarkable series of transcriptions (1941) of Bach Preludes and Fugues for that most Lobosian combination, the orchestra of cellos, can be regarded as a super-abundant manifestation of this same idealistic preoccupation with classical antiquity, a classicism inextricably fused with the Brazilian identity. This psychological but supportable fusion resulted most famously in the composition of Villa-Lobos’s cycle of nine works, the Bachianas brasileiras (1930–45).

The delicious idea of a form which was ‘inspired by the musical ambience of Bach, considered by the composer as a universal folkloric source, rich and profound, an intermediary for all people’, and juxtaposed with all manner of Brazilian musical material was not born overnight, and in any case reflected prevalent trends in the European neoclassicism of the day. ‘Bachiana brasileira’ was struggling for birth long before Villa-Lobos launched the series in 1930. An early love of Bach had been instilled in the young Heitor by a favourite aunt, and the manuscript survives of a Bach fugue transcribed by him for cello and piano, dated 1910. The Pequena Suite (1913) for the same instruments enshrines early evidence of Villa-Lobos’s love of archaisms, containing a fugato marked ‘All’antica’.

The preoccupation continued even while Villa-Lobos wrote in his most uncompromisingly raw vein: Chôros No 2 (1924) for flute and clarinet is a genuine two-part invention, and the surviving short-score fragment and verbal description of No 13 (1929) demonstrate that Villa-Lobos conceived the work contrapuntally. Indeed the contrapuntal and sequential nature of much true chôros music-making, to be heard in the streets of Rio and reflected in these and other parts of Villa-Lobos’s own Chôros, merely served to bring credibility to the Bachianas thesis when it was finally formulated. Villa-Lobos suddenly resumed his Bach transcriptions for cello and piano in 1930, and also wrote several short pieces for the same instruments (including O trenzinho do caipira, later to be orchestrated and included in Bachianas No 2). Villa-Lobos did not set out to create the Bachianas brasileiras: they evolved, like the Chôros, out of biological and historical necessity.

This evolution was typical of the chaotic production of the composer, and an examination of the cycle’s chronology and origins shows an uncoordinated journey of leaps and bounds rather than a well-ordered ‘Musical Offering’. The opening movement of No 1 was added in 1938, eight years after the composition of the remainder of the work; No 2 (1930) is almost entirely an orchestration of previously composed material; and the published text for the first movement of the celebrated No 5 (1938) was hastily substituted after Villa-Lobos realized that his original text, by a minor Brazilian poet, could not be used because of copyright law, and the second movement of the work was added as an afterthought in 1945. Despite this muddled production the series is imbued with unity and cohesion, stemming essentially from the homogeneity of the musical material chosen by Villa-Lobos and its treatment.

Bachianas Nos 1 and 5 are both scored for an orchestra of cellos, and are offset on this recording by a selection of the 1941 Bach transcriptions (all from the ‘Forty Eight’) for the same ensemble. Several of the transcriptions are transposed from the original keys to suit the new medium. They are the best known of many Bach adaptations made by Villa-Lobos at this time: other preludes and fugues were arranged by him for orchestra, and for a cappella voices, and it is interesting to note that, as a result of these experiments, Villa-Lobos decided the last Bachianas, No 9 (1945), should be, in a manner close to that of The Art of Fugue, almost abstract in its medium. It is playable either by a string orchestra or an orchestra of voices. Parts of No 8 for orchestra (1944) also exist in choral transcriptions.

To emphasize the duality of spirit of the Bachianas brasileiras Villa-Lobos gave each movement two titles, one Baroque and the other Brazilian. Perhaps it is better to seek spiritual rather than literal implications in following these titles through to the music they head. The first movement of No 1, for example, has the motoric drive of a Brandenburg concerto rather than any more specific Baroque structural features, while the closing fugue of the same work veers cheerfully and wilfully from academic contrapuntal technique in its attempt to depict the serenading games of Rio’s old street musicians, who would improvise musical questions and answers (not necessarily tonal ones!) in the already hazy days at the turn of the century. The delicious Modinha, one of the most beautiful and enduring movements to have been written by Villa-Lobos and demonstrating perfectly the embodiment in his music of an idealized antiquity, demonstrates the lyrical and nostalgic nature of that particular old song form, but hints also at the contemplative slow movements of Bach’s solo concertos.

The ternary structure of this Modinha is one favoured throughout the Bachianas series, and it is expanded in the celebrated first movement of No 5. An initially wordless soprano muses lyrically around a modinha-type melody, declaims forcefully on the almost painful beauty of a Brazilian twilight, and then returns to semi-conscious contemplation. The soprano line is duplicated throughout by the leading cellist: Villa-Lobos puts the human voice and his own favourite instrument on an equal footing. A Lobosian obsession—birdsong—is the basis of the exuberant Dansa, with text by Villa-Lobos’s great compatriot Manuel Bandeira and musical material based on fragments of avian melody from the north east of Brazil.

Voice and instrument are also seen as equal partners in one of the first works composed by Villa-Lobos during his 1920s Parisian sojourn. Though the Suite for voice and violin (1923) is related more to the rhythmically vital and colourfully conceived Chôros series (1921–9) than to the mellower Bachianas, contrapuntal ingenuity is not eschewed. Voice and violin imitate, chase and run, like the flute and clarinet duet of Chôros No 2 or indeed the conversa-style fugue of Bachianas No 1.

The work was first performed in 1925, when the violin was played by Paulina d’Ambrozio, who had been a collaborator with Villa-Lobos in the infamous 1922 Week of Modern Art in São Paulo, where leading artists and musicians had proclaimed to a hostile Brazilian public a new artistic aesthetic based on distinctly nationalistic premises. The ‘modernistic nationalism’ is heavily apparent in the Suite, which is based on textual fragments by Mário de Andrade, a musicologist, poet and philosopher whose influence on Brazilian thought and culture during the 1920s and 1930s was of supreme importance in establishing a real national identity in music and literature. This depiction of a young girl’s calm and indolent reflection and then her frenetic dancing embodies naive and enthusiastic sentiments later to be developed more nobly in Bachianas No 5. Brazil’s warm, raw, and lyrical soul is crystallized here in the spontaneous creation of her most celebrated musical son.