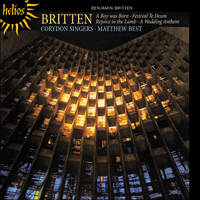 A Boy was Born & other choral works

‘Excellent in every aspect. The presence is breathtaking, the singing of both soloists and choir are quite superb, and the accompaniment by the organist, Thomas Trotter, contributes so much although at times it is barely there, just the faintest rumble. Getting all this on to tape so artistically is most creditable. Britten would have loved it. I did … reflects great credit on all concerned’ (Gramophone)
‘This beautifully made record deserves the widest circulation. The sound these choirs make is of great beauty, and is captured in a flawless recording full of atmosphere and warmth’ (The Monthly Guide to Recorded Music)

In the catalogue of Britten’s compositions those involving a chorus, with or without instrumental or orchestral accompaniment, loom large. They stretch right across his working life, beginning in 1929 and ending with the Welcome Ode, Op 95, his last completed score finished a few months before his death. The four pieces recorded here belong to the first half of that period; the earliest of them dates from 1933, the latest from 1949. They are all modest in their demands, requiring at most an organ to support the choir and add a touch of colour to the music.

A Boy was Born, besides being the earliest, is the longest and most elaborate of the works in this collection. It was published as Op 3, and is for unaccompanied four-part chorus. It is, perhaps, also a conscious tour de force by a nineteen-year-old composer as anxious to demonstrate his skill at the handling of words as he had his ingenuity with instruments in the Sinfonietta Op 1 shortly before. Indeed there is something almost orchestral about the way Britten has laid out A Boy was Born, which he described as ‘Variations for unaccompanied choir’. There are six intricate choral variations in the first section, though in fact the theme of the variations is really the first four notes—D E G E—to which the upper voices sing the words of the title. Theoretically in D, the work, like most of Britten’s music, is as much modal as diatonic, though his modality bears little relationship to that of the English pastoralists—Vaughan Williams and the rest—who were then at their most influential. If anyone influenced Britten’s thinking, apart from Frank Bridge, it was probably Alban Berg, and there is certainly something Viennese about the way Britten employs the devices of augmentation, inversion and the rest to vary his thematic motif.

In Lullay, Jesu the motif supplies the accompaniment and is also worked up into a complex texture to illuminate the dialogue between Mary and Jesus. Herod, carried along by the men’s voices, uses piled-up fourths to convey the king’s brutality. In Jesu, as Thou art our Saviour, the theme is treated with relaxed gentleness, and the journeyings of The Three Kings are reflected in the ‘shape’ of the music, while the Kings themselves are clearly defined by the E flat–C–A relationship. Christina Rossetti’s lovely carol In the bleak mid-winter finds the motif used as a chill background of women’s voices against which the rest of the chorus sing a measured version of the Corpus Christi Carol. The final variation is an extended rondo with several episodes based on a number of carols linked by the Noel! chorus.

St Matthew’s Church, Northampton, has a considerable reputation for commissioning music, and in 1943 (not the most propitious of times perhaps) asked Britten to compose a cantata to celebrate the church’s fiftieth anniversary. The result was Rejoice in the Lamb. In common with his normal practice of seeking out unusual texts the composer turned to Christopher Smart’s Jubilate Agno. Smart (1722–1771) was confined in an asylum when he wrote the poem, a tender yet intensely felt celebration of the majesty of Christ and of the simple joys He has conferred upon the wretched author and the rest of creation. Britten took Smart’s eccentric religious symbolism and matched it with music designed to underline that symbolism. The work begins with a choral introduction in which Smart’s anthropomorphic relationship between God, the animal kingdom and Old Testament heroes is explored. A treble solo follows which treats the poet’s relationship with his cat Jeoffry, a heartfelt rumination which recalls Samuel Barber’s later setting of an Irish medieval monk’s delight in his pet. An alto solo extols a mouse’s valour in the face of the cat’s predatory nature; and a tenor solo relates how flowers are the messengers of God’s blessing and poetry. A profoundly personal chorus follows in which Smart equates his bodily suffering and mental distress with Christ’s passion (‘… the watchman smites me with his staff … For I am in twelve hardships, but he that was born of a virgin shall deliver me out of all.’). Then there is a strange recitative for bass solo in which the letters h k l m are equated with attributes of God, and a chorus wherein various musical instruments conjure up onomatopoeic rhymes (for example, ‘the Shawm rhimes are lawn fawn moon boon and the like’). The cantata ends with a ‘Hallelujah’ chorus ‘from the hand of the artist inimitable’. Someone has described this remarkable occasional work as a piece of Gebrauchtsmusik, whether by way of apposite description or as pejorative dismissal is unclear, but the exquisite delicacy with which Britten has clothed Smart’s semi-mystical vision deserves a more careful description.

On 29 September 1949 the Earl of Harewood married Marion Stein, and to celebrate the union of two great friends Britten composed a choral anthem with organ accompaniment to words specially written by Ronald Duncan. The wedding anthem Amo Ergo Sum, published as Op 40, is one of the least often heard of all Britten’s occasional pieces and its neglect has been attributed to its very special nature. Reading the poem, however, it is difficult to see that Duncan’s words (‘Love has made them one / Amo Ergo Sum! / And by its mystery / Each is no less but more’) have so particular an association that performance should be discouraged by them.

The music is appropriately optimistic in tone. Its bright B major, supported by melismatic runs on the organ which become a kind of refrain, gives way to a soprano solo and, changing to F, expounds upon the simile of the purity and beauty of the rose. The tenor sings an aria based on another simile, that of the endlessly flowing river of love and mutual joy, and the two combine in a duet to the words quoted above. Britten’s use of modal harmony is strongly felt throughout though there is a diatonic base on which it evolves, returning in the final celebratory chorus to the opening key of B.

Settings of accepted liturgical texts are rare enough in Britten’s music to make one suspect that he had little time for orthodoxy. Indeed, unlike most English composers, his avoidance of these texts is almost un-English. Only three such settings appear in the list of his works, an earlier Te Deum (1935) to which, at the request of the Duke of Edinburgh, he added a Jubilate in 1961, and this Festival Te Deum of 1944, written for the centenary of St Mark’s Church, Swindon. Composed at the time Britten was at work on Peter Grimes, it employs the English text and its most unusual feature is the contrast between the choir’s constantly varying tempi and the steady dotted minim accompaniment of the organ.