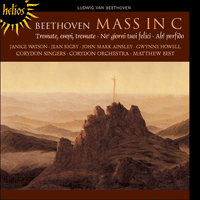 ‘Two budget recordings of this underrated mass stand out … My own favourite, the more dramatic 1995 version conducted by Matthew Best. He conjures a prayerful mood for the Kyrie and Andante, and a fierce exultation in the Gloria and Credo. Orchestra and chorus are incisive, and the balance ensures that you hear all Beethoven's woodwind detail, not least his inspired touches of bassoon colouring’ (The Daily Telegraph)
‘A fascinating CD’ (The Recorder, USA)

Beethoven composed the Mass in C in 1807 to a commission from Prince Nikolaus Esterházy. Although by this time his status as a composer of instrumental works was assured, he was less experienced in sacred music and had never before set the words of the Mass. (He was to do so only once more, over a decade later, in the Missa solemnis.) Another powerful inhibiting factor was the well-known corpus of Masses by Haydn, himself still alive, against which Beethoven’s attempt could hardly fail to be measured. Thus he found it difficult to fulfil the commission: so much so that he was forced to write to Prince Esterházy late in July 1807 apologizing for the delay and promising to deliver the completed work by 20 August at the latest. It was first performed at Eisenstadt on 13 September as part of the name-day celebrations for Esterházy’s wife, the Princess Maria. But Esterházy was disappointed with it, and as a result Beethoven suppressed the intended dedication to him; when the Mass was first published, by Breitkopf & Härtel in 1812, the dedication was to Beethoven’s patron Prince Kinsky.

The Mass in C also failed to find much favour with the writer and critic E T A Hoffmann, who reviewed the published score in the Allgemeine musikalische Zeitung in 1813. This important review subsequently fed into Hoffmann’s 1814 essay on ‘Old and New Church Music’. For Hoffmann, the ideal church music was that composed within the unaccompanied contrapuntal tradition stemming, as he saw it, from Palestrina. The problem in the second decade of the nineteenth century was to reconcile the old aesthetic with the newer one of instrumental music which, in Hoffmann’s opinion, gave immediate access to the metaphysical realm, or ‘spirit world’, precisely without needing recourse to words. Indeed, it was probably the pre-eminence of Beethoven’s symphonic music in this respect, expounded in his celebrated 1810 review of the Fifth Symphony, that left Hoffmann feeling short-changed by the Mass:

That Beethoven would rank beside Haydn in terms of style and composure the reviewer [Hoffmann] had no doubt, even before he had read or heard a note of the present work; but he did find himself disappointed in his expectation with regard to its conception and expression of the Mass text. Elsewhere Beethoven’s genius willingly sets in motion the machinery of awe, of terror. So, the reviewer thought, his spirit would also be filled with profound awe when contemplating celestial things, and he would express this feeling in sounds. On the contrary, however, the entire Mass expresses a childlike optimism that by its very purity devoutly trusts in God’s grace, and appeals to him as a father who desires the best for his children and hears their prayers.

Notwithstanding his reservations about the ‘general character’ of the Mass, Hoffmann found it ‘entirely worthy of the great master’ with respect to ‘its innner structure as well as [its] intelligent orchestration’. But his failure to mention Beethoven’s sacred music at all in the 1814 essay implies his fundamental disapproval of this side of the composer’s output.

Hoffmann’s two essays date from a period when religious feeling was undergoing something of a resurgence as the Napoleonic era drew to a close. Prior to this the fortunes of religious music had declined, a fact which is reflected in the five-year gap between composition and publication of the Mass in C and which, no less than his own fears of odious comparisons, helps to explain the vigour with which Beethoven initially attempted to sell it to Breitkopf in 1808. During June and July that year he was offering it along with the Fifth and Sixth Symphonies and the Cello Sonata Op 69; so insistent was he that the Mass be purchased that he initially refused to sell the instrumental works without it, casting back Breitkopf’s claim that ‘there is no demand for church works’ and steadfastly maintaining that the Mass would be a success. Yet only weeks later he was forced to climb down and offer it as a ‘present’, even relieving the publisher of the expense of having the score copied.

In seeking to twist Breitkopf’s arm, Beethoven resorted early on to the well-worn claim of ‘originality’. Echoing Haydn’s famous puff for his String Quartets Op 33 as well as his own earlier remarks about his sets of piano variations Opp 34 and 35, Beethoven wrote of the Mass: ‘I think that I have treated the text in a manner in which it has rarely been treated’. On the face of it this seems like exaggeration, since the treatment of the text is in many respects highly traditional. The division of the two longer movements into contrasting subsections defined by changes of tempo, metre and key follows the conventional pattern (Gloria—Qui tollis—Quoniam; Credo—Et incarnatus—Et resurrexit), and Beethoven further observes the convention of subdividing the third section in each case in order to highlight the concluding phrases ‘Cum Sancto Spiritu, in gloria Dei Patris’ (Gloria) and ‘Et vitam venturi saeculi’ (Credo) by means of quasi-fugal textures. Similarly, the use of modal contrast between ‘Agnus Dei’ (C minor) and ‘Dona nobis pacem’ (C major) and the change of key (to F major) for the Benedictus are unsurprising: though the choice of a new key (A major) also for the Sanctus is less common.

Even so, it would be wrong to accuse Beethoven simply of talking up the novelty of his approach in order to achieve an easier sale (though that strategy was hardly unknown to him); in many respects the Mass in C reveals an intensely personal and vividly dramatic response to these central liturgical texts: a response, moreover, that suggests much more than the uncomplicated ‘childlike optimism’ perceived by Hoffmann. The four-fold repetition, piano followed by a rapid crescendo to forte, of the word ‘Credo’ at the beginning of that movement is a masterful if ambiguous touch. This is a belief that begins in unbelief or doubt and struggles for self-acceptance; what is set to music is not merely the word but the believer’s concomitant leap of faith. Equally impressive is the anguished tone of the Agnus Dei, set in the relatively unusual metre of 12/8 which Beethoven was later to use in two similarly expressive movements, the slow movement of the ‘Hammerklavier’ Sonata and the Benedictus of the Missa solemnis. And if the beginning of the Credo dramatizes the leap from doubt to faith, Beethoven suggests the opposite move near the beginning of the ‘Dona nobis pacem’ which is disturbed by the sudden intrusion, in C minor and with agitated tremolando string writing, of ‘Agnus Dei … miserere nobis’ once again. This dramatic stroke has a clear parallel, one strengthened by the use of the identical keys, in the eerie return of the Scherzo material in the Finale of the Fifth Symphony, composed the following year. And looking further ahead, there are parallels to be drawn with the Agnus of the Missa solemnis (although the famous invocation there of the music of the battlefield is more overtly to be found in the timpani rolls near the beginning of the Sanctus of the Mass in C). Beethoven, it seems, could not unreservedly accept the hope of peace held out at the end of the Mass text; and we may confidently seek an autobiographical explanation here, mindful of the struggle to come to terms with and master his deafness that is ‘composed out’ in so much of the music of what is very properly called Beethoven’s ‘heroic phase’.

One of the most original and moving touches comes in the last sixteen or so bars of the work, which reintroduce the music of the Kyrie. While the wholesale re-use of the music of ‘Kyrie eleison’ for ‘Dona nobis pacem’ was by no means unusual (witness Bach’s B minor Mass, for example), Beethoven’s approach here is quite different. One aspect of the return to the opening music is its revelation of a hidden motivic relationship: the head-motive of ‘Dona’ is derived rhythmically and by melodic inversion from that of ‘Kyrie’. But rather than imparting a sense of abstract cyclic unity to the Mass (despite the fact that other derivatives of the ‘Kyrie’ motive may be traced throughout), the musical return is experienced more as a kind of epiphany: a new awareness that what was first begged for in the name of mercy is revealed now as peace, through the mediation of the Lamb of God. And the power of instrumental music to speak the ineffable, as Hoffmann would have it, is wonderfully demonstrated here in that the return is instigated by the orchestra alone: verbal response follows in the second bar, giving public utterance now to a truth already grasped intuitively, without the mediation of language.

The three remaining items recorded here belong to the world of opera rather than sacred music and, although two of them were published in Beethoven’s lifetime, only Ah! perfido has retained a firm place in the repertoire. Composed in Prague early in 1796 during the concert tour on which Beethoven had embarked in the company of Prince Lichnowsky, Ah! perfido is Beethoven’s most outstanding contribution to the genre of the concert aria, a setting of an operatic text for a specific singer, for performance in concert as opposed to on stage. While the text of the recitative is by Pietro Metastasio, the author of the aria text remains unknown. Also uncertain is the identity of the intended soprano in Prague in 1796; the two most likely candidates are the Countess Josephine von Clary-Aldringen, a gifted amateur, and the professional Josepha Duschek. The work certainly requires a performer of considerable vocal range and stamina, and it seems that problems in this respect may have forced Beethoven to modify the vocal part for its Viennese premiere, which most likely took place on 22 December 1808 (the score had been published three years earlier, in 1805) at the famous Akademie when excerpts from the Mass in C were performed along with the premieres of the Fifth and Sixth Symphonies, the Fourth Piano Concerto and the Choral Fantasia.

Ne’ giorni tuoi felici and Tremate, empi, tremate were both undertaken as exercises in Italian text-setting, which Beethoven studied under Salieri during the period around 1801–02 as he sought to acquire fluency in composing for vocal ensembles in preparation for writing opera. (His copying of extended extracts from Mozart’s Don Giovanni a few years later is also to be understood from this perspective.) The soprano aria No, non turbarti, WoO92a, the autograph manuscript of which bears corrections in Salieri’s hand, belongs together with the duet and the terzet as marking the culmination of this didactic phase. In fact the student status of both the aria and the duet is indicated by the fact that in neither case did Beethoven completely finish the orchestration; that he did so in the case of Tremate indicates that a performance was envisaged, although in the event the premiere did not take place until 27 February 1814, when the soloists were Anna Milder-Hauptmann, Giuseppe Siboni and Carl Weinmüller, the first and last of whom created the roles of Leonore and Rocco respectively in the premiere of Fidelio later that year.