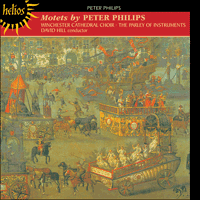 ‘14 instances of the most sheerly glorious sound you are likely to come across in years’ (Fanfare, USA)
‘This is a revelation! This wonderful programme helps to draw him from the limbo of nearly 400 years of near-oblivion… a programme of astonishingly rich diversity, vibrantly performed. This record is a must for any lover of choral music of the period’ (Organists' Review)
‘It may be a while before you hear anything as glorious as this… tremendous stuff, and will instantly reward the investigative listener’ (CDReview)

Peter Philips is the one first-rate Elizabethan composer who remains largely unknown today, even to specialists. His modern reputation has suffered from a form of musical chauvinism that works to the disadvantage of émigrés: he left England at an early age, never to return, so he has been ignored by English musicologists, and equally he has been treated as a foreigner by their colleagues in his adopted country, the Spanish Netherlands (now Belgium). As a result, only a small amount of Philips’s music has found its way into print in this century, and less of it has been recorded. Yet it is equal in quality to the best work of that richly productive period. His keyboard music invites comparison with Byrd, his consort music with Dowland, his motets and madrigals with Gibbons and Weelkes – or rather with Lassus and Marenzio, because his vocal music in particular belongs to the cosmopolitan European tradition.

Philips was born in 1560 or 1561, presumably in London. He was a choirboy at St Paul’s Cathedral and in 1582 received a legacy from Sebastian Westcote, the recusant Catholic who was almoner and choirmaster there. He had begun to compose while he was still at St Paul’s: a pavan of his is dated 1580 in the Fitzwilliam Virginal Book with the comment ‘The first one Philips made’. A few months after Westcote’s death Philips left England for good, apparently because he was a Catholic. He travelled first to the English Catholic community at Douai, and then went on to Rome where he worked at the English College. In 1585 Philips entered the service of the Catholic exile Lord Thomas Paget, and travelled with him to to France, Spain and the Netherlands, settling in Brussels in 1589. After Paget’s death in 1590 Philips moved to Antwerp, where he ‘mainteyned himself by teachinge of children of the virginals, being very cunning thereon’, and published his first collections of madrigals. In 1597 he entered the service of Archduke Albert, regent of the Spanish Netherlands, as one of the organists of the Brussels court chapel; he remained there for the rest of his life. In his later years he devoted himself largely to sacred music, though there is no evidence that he became a priest as is often said. He died in 1628.

Most of the music on this record was published in two large collections, Cantiones sacræ, pro præcipuis festis totius anni et communi sanctorum (Antwerp, 1612) and Cantiones sacræ octonis vocibus (Antwerp, 1613), the former in five parts, the latter in eight. They were dedicated respectively to the Virgin Mary and Saint Peter, and they contain polemical dedications attacking heresy – in, presumably, his native land: ‘To you therefore, Leader, Prince, Father, Shepherd, Rock,’ he wrote in 1613, ‘whom the whole Church celebrates in song wherever it is in harmony in heaven and on earth (only the discord of heresy snarls at you in disparagement), to you, the preserver of concord and conqueror of discord, in discordant accents I dedicate and consecrate concordant notes.’ The two sets were originally published as unaccompanied choral music, but Philips experimented with organ parts in the two- and three-part motet collections published in 1613 and 1616, and republished the 1612 set with a continuo part in 1617; a second edition of the 1613 set with a continuo part appeared in 1625. The last piece on this record, the Litania duodecima, comes from Litaniæ Beatæ Mariæ Virginis, in ecclesia Loretana canisolitæ (Antwerp, 1623). Only two voice-parts of this collection have survived, but the two-stave basso continuo allows the rest to be supplied with some confidence; I am grateful to Dr Lionel Pike for the use of his fine unpublished reconstruction.

Not much is known about performing conditions in the Brussels court chapel. Sixteen singers were on the payroll, as well as the maître de la chapelle and two or three organists who probably sang when they were not playing. There is no mention of any instrumentalists, but the secular court musicians during Philips’s lifetime included ‘fagotistes’, harpists, viol players (including the Englishman Daniel Norcombe) and lutenists, some of whom are also described as members of the chapel. We have laid out the scoring of the continuo using these instruments, taking into account the practice of Spanish churches; as we might expect, there were strong musical ties at the time between Spain and its colony in the Netherlands. We have divided the single continuo part of Philips’s eight-part motets into two, one for each group, following a well-established practice in Italy and Germany. For instance, Giovanni Gabrieli’s polychoral motets were printed with a single figured bass in the original prints, but some of them survive in German manuscript sources with divided continuo parts.

John Steele has pointed out (Aspects of Keyboard Music: Essays in Honour of Susi Jeans, Oxford, 1992, p141) that Philips’s two sets of Cantiones sacræ are ‘the most substantial corpus of Latin choral motets by any English composer with the sole exception of William Byrd’. Yet there are few signs of his English training in the collections, and they should be compared rather with the music that he would have come across in Rome by, among others, Palestrina, Victoria, Soriano, and Felice Anerio, who was maestro di capella at the English College 1584/5. Certainly, Philips’s eight-part motets are relatively conservative compared with the most advanced works of the time by, say, Gabrieli, Schütz and Michael Praetorius, with their use of high- and low-pitched choirs, and their writing for solo voices and obbligato instruments.

There is plenty of traditional counterpoint in the double-choir motets recorded here. Hodie concepta est, for instance, has a good deal of dense imitative eight-part writing, though it ends with lively alleluias thrown in block chords from choir to choir, while Salve regina opens with a discussion of the opening phrase of the plainsong before proceeding to more typical double-choir writing. By and large, however, they rely for their effect on contrast – between the two choirs, between the alternation of duple and triple time, and between slow-moving passages in semibreves and minims and faster-moving ones in crochets and quavers. A motet such as Ecce vicit Leo is almost entirely homophonic, with a brilliant repeated-note figure at the words ‘et benedictionem’, derived from Renaissance battle music. Philips’s nine-part Litany is also largely homophonic and contrasts a high-pitched four-part choir against a low-pitched five-part one, the choirs taking respectively the roles of the priest and the people in the responses. In the hands of a lesser composer the constant repetitions of ‘ora pro nobis’ could easily become tedious, but Philips effortlessly keeps up the interest by varying the rhythmic patterns and by constantly cadencing in different keys.

Philips’s five-part motets have a similar mixture of old and new elements. A piece like Christus resurgens is an essay in classic sixteenth-century counterpoint, with each phrase of the text associated with a separate passage of counterpoint. But the five-part scoring with two equal and crossing soprano parts (usually associated at the time with the Italian madrigal) gives the music an unusual brilliance, and introduces an element of contrast akin to the interplay of separate choirs. Further contrast is obtained with passages of triple time. Ascendit Deus has a triple-time alleluia at the end, while in Cantantibus organis Cecilia the opening words are set to dance-like triple time – representing, presumably, the organ; ‘organum’ was used for any instrument in Classical Latin, but acquired its modern meaning early in the Christian era. Tristitia vestra is one of Philips’s most modern and madrigal-like motets, which illustrates sadness turning to joy with a series of dramatic changes, from slow-moving plangent polyphony to triple time, and then to a hectic alleluia. Perhaps Henry Peachum had music like this in mind when he wrote in 1622: ‘Nor must I forget our rare countryman, Peter Philips, organist to their altezzas at Brussels and now one of the greatest masters of music in Europe. He hath sent us over many excellent songs, as well motets and madrigals. He affecteth altogether an Italian vein.’