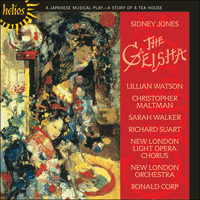 This issue is an extension of Ronald Corp's popular forays into the territory of light music. The 'musical comedy' called The Geisha, by Sidney Jones, dates from 1896 and was by far the biggest hit of that decade, its popularity outstripping everything else, even The Mikado, throughout Europe. It has never quite been forgotten, having been revived several times since, in both professional and amateur productions, in several languages. Everybody who knows the piece (and there are surprisingly many people who do; we've already had enthusiastic letters from people who've seen it illustrated in our new catalogue) is fulsome in their praise of it.

The story tells of the amorous goings-on when Lieutenant Reggie Fairfax and his fellow officers from HMS Turtle descend on 'The Tea-House of Ten Thousand Joys' in Japan, longing for a cup of tea and female company. The three big hits from the score were the romantic 'Star of my soul' (sung here by Christopher Maltman), 'Chin Chin Chinaman' (hilariously delivered by Richard Suart and chorus) and 'The Amorous Goldfish' (sung in her own inimitable fashion by Sarah Walker).

Politically the piece is highly incorrect!

‘This is an enterprising 'first'. I long to hear more of them and if this CD has the success it deserves, let us hope it may be the beginning of a series … the recording that has given me the most joy during the year. A work I have waited fully 40 years to find on LP or CD’ (Gramophone)
‘Its tunes are charming and its orchestral colour delightful. It's a hugely entertaining discovery’ (Classic FM Magazine)
‘I practically jumped for joy’ (Hi-Fi News)
‘If you enjoy English operettas of the late 19th century I suspect that you'll be enchanted’ (The Light Music Society Journal)
‘Altogether a treat’ (The International Opera Collector)

What?! The Geisha?! But isn’t that a musical comedy?

Well, yes and no. To be sure, The Geisha belongs to that category of pieces which emerged during the 1890s as a bright and breezy alternative to the comic operas of Gilbert and Sullivan. However, there was still a great deal of development in musical theatre before the syncopated song-and-dance, boy-meets-girl musical comedy of the 1920s and 1930s. Listen to the opening chorus of The Geisha and you might readily believe you were hearing one by Sullivan. There are plenty of other numbers in The Geisha that display specifically nineteenth-century lyricism. The song ‘A Geisha’s Life’ is a model of its kind, as is the baritone ballad ‘Star of my Soul’, and the Kissing Duet is a quite exquisitely shaped piece of duet-writing. Altogether, Sidney Jones, the composer of The Geisha, displayed a level of technical accomplishment that would never be expected of twentieth-century musical comedy composers.

James Sidney Jones came from a musical family. His father, James Sidney Jones senior (c1837–1914), was a bandmaster and conductor, and his youngest brother Guy Sidney Jones (1875–1959) was to follow in his footsteps as a musical director and composer. Born on 17 June 1861 at 56 Dame Street, Islington, the future composer of The Geisha spent his childhood moving from one to another of his father’s military stations—Colchester, Aldershot, York, Dublin. Along the way he learned the capabilities of a variety of instruments, and in Dublin he rounded off his education with lessons from Sir Robert Stewart (1825–1894) of Trinity College.

His father finally settled in Leeds as conductor of the Leeds Rifles, musical director at the Grand Theatre and conductor of the Spa Orchestra at Harrogate. Young Sidney gave piano lessons and became clarinettist in his father’s orchestra at Harrogate before getting a position as conductor of touring musical shows in 1882. He toured for nine years, conducting such shows as Planquette’s Les Cloches de Corneville and Cellier’s Dorothy (with George Bernard Shaw’s sister Lucy Carr-Shaw in the lead). After going to Australia with a company from London’s Gaiety Theatre, he returned briefly to the provinces before finally making it to the West End in 1892 as conductor of the early musical comedy In Town. By now he had begun composing numbers for the impresario George Edwardes (1855–1915), who evidently liked what he heard. Jones’s song ‘Linger Longer Loo’ (1893) enjoyed an international career and inspired a celebrated drawing by Toulouse-Lautrec of Yvette Guilbert singing it.

It was for George Edwardes that Jones produced his first full score, A Gaiety Girl, in 1893. It ran for thirteen months, and its baritone ballad ‘Sunshine above’ was especially admired. In 1894 Jones followed it with An Artist’s Model, a more ambitious piece which ran for fifteen months. By 1896 he was already comfortably well-off, the owner of a villa in St John’s Wood with an Erard piano in his study and a pony-trap outside. Then came the Japanese ‘comedy opera’ with which George Edwardes sought to tap the constant fascination of the public for the oriental milieu that had brought such success to Gilbert and Sullivan in The Mikado. The formula worked yet again.

To be precise, The Geisha was a ‘musical play’ rather than a ‘musical comedy’. The emphasis was very much on catchy songs, attractive settings, colourful costumes, and dialogue that was snappy for its time; but the story was just that little bit more developed and its score just that shade more substantial than the loose musical comedies of the period. However, librettist ‘Owen Hall’ (James Davis, 1853–1907), lyricist Harry Greenbank (1865–1899) and Jones himself never sought to match Gilbert and Sullivan. On the contrary they expressly strove for something altogether lighter. For Jones, the principle was ‘brightness and brevity’, and his aim was that none of his numbers occupied more than three minutes, except the finales which ran to about five. Yet, within these aims, Jones approached his task with no less dedication than Sullivan. He claimed to ‘have worked-in a great deal of Japanese colouring, and [to] have taken many suggestions from the genuine national music’. The Japanese March in Act II is specifically based on an old Japanese song. As with Sullivan’s Mikado, though, Jones’s music was for the most part anything but oriental, leaning more obviously to continental European dance rhythms than Sullivan’s very British style.

The Geisha ran at Daly’s Theatre, London, for an unprecedented 760 performances. Singing actress Marie Tempest (later Dame Marie Tempest) was O Mimosa San, dancing soubrette Letty Lind was Molly Seamore, handsome baritone leads C Hayden Coffin and W Louis Bradfield were Lieutenants Reginald Fairfax and Dick Cunningham, comics Harry Monkhouse and Huntley Wright were the Marquis Imari and Wun-Hi. As with all of George Edwardes’ shows, the score was subject to changes as new cast members joined. By no means all of these numbers were by Jones, and one of the most successful along the way was J M Capel’s still familiar ‘Love, could I only find thee?’. Eventually, however, the score became standardized in the form used for this recording, with just three numbers not by Jones himself—‘Jack’s the Boy’ and ‘The Toy Monkey’ composed by Lionel Monckton, and ‘The Jewel of Asia’ composed by James Philp.

After its two-year run, The Geisha was succeeded at Daly’s in 1898 by Jones’s A Greek Slave, a work with a slightly more ambitious score and a setting that makes it a precursor of Sondheim’s A Funny Thing Happened on the Way to the Forum. But Greece appealed less than the Orient, and the team that created The Geisha followed up with a Chinese piece, San Toy, in 1899. Though not really up to the Geisha standard, it actually ran marginally longer.

By now Jones was feeling sufficiently confident of his ability to rebel against the George Edwardes formula that restricted his loftier ambitions and permitted interpolated songs by other composers. He severed his links and settled down to compose scores that were entirely his own. The results were the ‘comedy opera’ My Lady Molly (1902) and the musical comedy The Medal and the Maid (1903). The latter had only a short run; but the former was a significant success. A work in the more ambitious English rural comic opera tradition of Cellier’s Dorothy and Sullivan’s Haddon Hall, its 342 London performances beat any British comic opera (as opposed to musical play) subsequent to Sullivan’s The Gondoliers—a longer run than any of Sullivan’s shows of the 1890s, longer than anything ever achieved by Edward German.

Even at the age of forty, though, Jones found his style and aspirations too firmly rooted in the nineteenth century to compete with the brighter, more overtly tuneful Edwardian style of Lionel Monckton and Paul Rubens. A brief spell as musical director at the Empire Theatre, Leicester Square, produced a couple of ballets, The Bugle Call (1905) and the seasonal Cinderella (1906); but See-See (1906), another oriental musical play, enjoyed a limited run. The public was perhaps more inclined to prefer the revival of The Geisha that had opened two nights earlier. The Ruritanian King of Cadonia (1908), with a libretto by Frederick Lonsdale, was Jones’s biggest success of these later years, after which A Persian Princess (1909) again did little. Jones provided the more substantial numbers for a couple of collaborations with Paul Rubens—The Girl from Utah (1913) and The Happy Day (1916)—and then retired.

Jones was a fastidious craftsman and a quiet but stubborn man. Though popular with the orchestras he conducted, he was never one to join in theatrical socializing, much preferring a fishing expedition to a glamorous first night. Eric Coates, who met him in later years, was struck by his simple charm and complete lack of worldliness. He lived on for a further thirty years after his last show, dying in Kew on 29 January 1946 at the age of eighty-four.

By then there was no doubt of the extent to which the popularity of The Geisha had oustripped that of any of his other works. If it was Sidney Jones’s calling-card in Britain, it was no less so abroad. Indeed its success on the continent of Europe far outstripped that of anything by Sullivan and that of any other show by a British composer since Balfe. Vocal scores were published in German and Italian, and on German stages it achieved more performances than any native work of its time. Its popularity in Russia was exemplified by its key role in one of Anton Chekhov’s most popular short stories, The Lady with the Little Dog. When a 1959 Russian film of the story achieved international circulation, the strains of ‘The Amorous Goldfish’ were once more heard around the world.

On the Continent, indeed, The Geisha survived on stage and in recordings well into the LP era. By contrast, in English-speaking countries the overriding success of the post-War American musical was something that only the works of Gilbert and Sullivan from the nineteenth century could withstand. Thus in Britain The Geisha has been almost entirely forgotten other than in the memories of those fortunate enough to see one of the few amateur productions since the Second World War. Yet it belongs—along with German’s Merrie England and Tom Jones, Leslie Stuart’s Florodora, Monckton’s A Country Girl, The Quaker Girl and The Arcadians, and Paul Rubens’s Miss Hook of Holland—to a group of works with their own distinct musical qualities. They represent a period when the British musical theatre was a potent force in the operetta theatres of the world, and they still have the power to appeal through their delightful melodies and their unassuming, period charm.