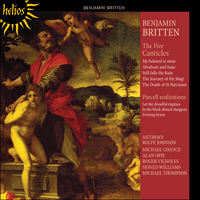 ‘Rolfe Johnson is in superb voice … this disc is an outstanding example of his artistry’ (Gramophone)
‘A superlative Hyperion disc … most notable is the Hyperion team presided over by Anthony Rolfe Johnson, whose 1991 recording has become one of the jewels in the record label's crown … Rolfe Johnson's pairing with countertenor Michael Chance in Abraham and Isaac is deeply moving as they enact what is essentially a miniature drama, and the tenor's mellifluous singing is a joy throughout this disc’ (The Daily Telegraph)
‘A superlative Hyperion disc’ (The Daily Telegraph)
«Un superbe disque d'approfondissement de la musique de Britten» (EcouterVoir, France)

Benjamin Britten's Five Canticles were not conceived as a cycle or integrated series, but were written at various times during his career in response to particular circumstances. Nor is the word ‘Canticle’ used in its strictly liturgical sense, but rather to indicate a work with deeply religious implications, three of them being written as memorial pieces. Scored for different combinations of performers, they are longer and more sophisticated in construction than simple songs, and could best be described as miniature cantatas. The choice of texts reflects Britten’s wide interest in English verse of all periods.

Canticle I, My beloved is mine, Op 40, was written in 1947 for the memorial concert for Dick Sheppard, former vicar of St Martin-in-the-Fields and founder of the Peace Pledge Union, a cause dear to the composer’s heart. Britten had recently been working on performances of Purcell’s Divine Hymns and the notion of composing a similar piece in memory of his friend would have been a natural consequence of this. The Canticle is scored for high voice and piano, and for his text the composer chose the poem ‘A Divine Rapture’ by Francis Quarles (1592–1644), itself inspired by a quotation from ‘The Song of Solomon’. Britten omitted one of the original verses, grouping the remaining six as 1+2, 3, 4, 5+6, to form a four-movement setting consisting of a contrapuntal barcarolle, a recitative, a fast canonic scherzo, and a mainly chordal finale. The text is an expression of divine love, expressed through the metaphor of physical love, each stanza ending with a version of the refrain ‘I my best beloved’s am, / So he is mine’.

Canticle II, Abraham and Isaac, Op 51, followed in 1952, written for performance by Peter Pears, Kathleen Ferrier and Britten himself during a series of recitals which the three friends gave to raise funds for the English Opera Group. For his text, Britten turned not to the authorized version of the Bible, but to the lively dialogue and rich medieval language of the story as recounted in the Chester Miracle Plays. If Canticle I can be described as a miniature cantata, this second Canticle should surely be regarded as a miniature opera, such is the force of the drama as expressed through the music. The two human protagonists are naturally assigned to tenor and countertenor voices, but for the voice of God Britten hit on the idea of making the two voices sing together in homophony, thus producing a mysterious new timbre which could not have been obtained from a third solo singer. The Canticle is divided into several short sections, reflecting the progress of the drama as it unfolds up to the climactic intervention of God at the moment of sacrifice, the work ending with a hymn of thanksgiving.

Canticle III, Still falls the Rain, Op 55, was written in 1954 in memory of the talented Australian pianist Noel Mewton-Wood, whose early death by his own hand had been a severe shock to Britten. The work is scored for tenor, horn and piano, and for his text Britten turned to the twentieth century, choosing Edith Sitwell’s poem ‘The Canticle of the Rose’, which although subtitled ‘The Raids, 1940. Night and Dawn’ is in fact an allegory of Christ’s passion.

As the original poem is quite irregular in metre, a lyrical setting would have been inappropriate, so the text is declaimed in the form of recitatives, culminating in a type of sprechgesang at the climactic moment where the poet quotes a phrase from the end of Christopher Marlowe’s play Doctor Faustus. Between these recitatives, the horn and piano play interludes consisting of a theme and six variations, based on an atonal series of ten notes, whose intervals alternately expand and contract, the final variation serving as a coda. This technique is closely related to the opera The Turn of the Screw, which Britten had recently completed.

A gap of seventeen years intervened before the composition of the fourth Canticle, The Journey of the Magi, Op 86, in 1971, for which Britten chose the poem of the same title by T S Eliot. It is scored for countertenor, tenor and baritone as the Magi, again with piano accompaniment, and is cast in a kind of rondo form, in which the journey by camel provides the mood of the ritornello sections. Eliot’s ambiguous poem has little in the way of overt Christian references, which Britten solves by using the plainsong antiphon melody ‘Magi videntes stellam’ as the basis of the central episode.

Canticle V, The Death of Saint Narcissus, Op 89, was written in 1974 while Britten was recuperating from a heart operation. His wide reading at this time included poetry by T S Eliot, whom he admired ‘for the clarity and security of his language’, and he decided to set this early poem in memory of his friend William Plomer, author of the words of Gloriana and the three Church Parables, who had died the previous year. As Britten was still not well enough to play the piano himself, the accompaniment was assigned to the harp, to be played by his friend and colleague Osian Ellis, the vocal line being given to the tenor voice. Britten himself was to die the following year, and this setting is an instance of his apparent preoccupation with death in his final years, of which the most notable example was his last opera, Death in Venice.

Like Gustav Holst before him, Britten was a great admirer of the work of Henry Purcell, whose attitude to music was much closer to his own than that of composers of the Germanic tradition. He once said that it was from Purcell that he had learnt to set English poetry to music, implying that his own teachers had given him little guidance in this matter, and his amanuensis Imogen Holst declared that Britten owed more to Purcell than to any other composer. By way of tribute, Britten composed his Second String Quartet in 1945 to mark the 250th anniversary of Purcell’s death, and used the Rondeau theme from Abdelazer as the basis of his own Young Person’s Guide to the Orchestra.

His versions of Purcell’s songs were originally made for practical use in the many recitals which he gave with Peter Pears. As was the custom in his time, Purcell wrote only the melody above a figured bass, leaving the interpretation of the harmonies to the musicality of the performer. In modern times such skills had become all but lost, necessitating the publication of ‘realizations’ of the basses in order to tell performers which notes to play. Britten, however, found these to be ‘frankly dull and out of date’ and decided to create new realizations for his own use and for publication for the benefit of others. As an inventive composer and gifted pianist, he was admirably suited to such a task, which cries out for what Dr Eric Roseberry has aptly described as the ‘happy fusion’ of Britten’s creative talents. As these realizations were begun in the 1940s, before the subsequent upsurge of interest in early music, they were written with the piano rather than the harpsichord in mind, as this was at that time a much more common instrument for song accompaniment. In this approach he was not entirely out of order, as the original published editions of the songs offered ‘a through-bass to each song, Figur’d for the Organ, Harpsichord or Theorbo-Lute’, from which one can infer that Purcell was not too specific about the instrument used, although whether this statement was the composer’s own or added by the publisher is not clear. As the piano had not been invented in Purcell’s day, Britten did not attempt to construct an authentic reproduction of what would have been played in the seventeenth century. Rather, he used the full resources of the modern piano as a vehicle for his own personal reaction to each song, believing that any realization should reflect both the meaning of the words and the personal manner of the player. He kept the actual notes of the bass (allowing changes of octave) and the original harmonies where the figures were given, but otherwise allowed his own creative imagination to interpret the harmonic needs of the melody according to his own feelings. Britten declared that it had been his constant endeavour ‘to apply to these realizations something of that mixture of clarity, brilliance, tenderness and strangeness which shines out in all Purcell’s music’.

Purcell wrote Let the dreadful engines for Part 1 of Thomas d’Urfey’s Comical History of Don Quixote, produced at Dorset Garden in London in 1694. D’Urfey’s rather loose adaptation of Cervantes’ original includes various absurd scenes, including an incident in the mountains of the Sierra Morena, in which Don Quixote and Sancho Panza come across a character called Cardenio, who seems to have been crossed in love. Dressed in ragged clothes and striking a ‘Wild Posture’, he sighs for his beloved Lucinda while delivering a savage diatribe against women in general, concluding that:

They were all contrived in spite,
To torment us, not delight;
But to scold and scratch and bite,
And not one of them proves right,
But all, all are witches by this light.
And so I fairly bid ’em, and the world, Good Night.

The song was published with other songs from the play in the same year, and was subsequently included in Book 1 of Orpheus Britannicus: a collection of the Choicest Songs … by Mr Henry Purcell, published in 1698 at the instigation of the composer’s widow Frances.

In the black dismal dungeon of despair and Evening hymn (‘Now that the sun hath veiled his light’) both appear in Book 1 of Harmonia Sacra: or, Divine Hymns and Dialogues, first published in 1688. The words of both are by Dr William Fuller (‘late Lord Bishop of Lincoln’) and are devotional pieces, the first being a plea for mercy and redemption, and the second, ostensibly a prayer on going to bed, has allegorical implications of the feeling of resignation in the face of death, so that the ‘evening’ referred to could well be the twilight of life itself. Purcell sets these subtle words to an expressive melody over a five-bar ground bass, with slowly-changing harmonies, sensitively realized by Britten in his piano interpretation.