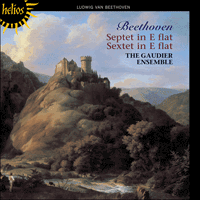 ‘I'm delighted to be able to hail this … as first rate on all counts. The recording itself cannot be over-praised for its vivid clarity and truth’ (Gramophone)
‘Beethoven offers players the chance to sparkle in his Septet and in the delightful Sextet (new to me, and not to be missed), a chance that The Gaudier Ensemble seize with all arms, hands and lips. A ravishing disc’ (BBC Music Magazine)
‘Gorgeous performances’ (Fanfare, USA)
‘Glorious’ (BBC CD Review)

Until the Classical period most chamber music was written for stringed instruments. True, a repertory of solos and trios was developed earlier for the recorder and its successor, the transverse flute. But, in general, the louder wind and brass instruments were confined to the orchestra and orchestral music until the second half of the eighteenth century, when rapid advances in their manufacture and playing techniques made them suitable for refined chamber music. The oboe, clarinet, horn and bassoon began to be used in duos, trios, quartets and quintets with strings and/or piano. Wind ensembles, hitherto the preserve of military bands or of lowly town musicians, began to be taken seriously by the best composers. Mozart and Haydn wrote a good deal of Harmoniemusik, as it was known in Germany, and Mozart’s wind serenades K361, K375 and K388 are profound masterpieces, worthy to stand beside his string quartets. Most important in the present context, Classical composers wrote serenades and divertimenti in an idiom midway between orchestral music and true chamber music: they are usually written like orchestral pieces with pairs of horns and/or oboes with strings, yet they tend to require the sort of virtuosity found in chamber music rather than orchestral string parts, and it seems that such works were normally played with single strings. For instance, Mozart’s Ein musikalischer Spass (‘A Musical Joke’, K522) is scored in a seemingly orchestral fashion for strings and two horns, yet the original edition has an amusing engraving depicting the piece being performed by a sextet, with a double bass instead of a cello.

Beethoven wrote a good deal for wind instruments in his youth, and contributed to each of these categories. Examples are an early trio for flute, bassoon and piano, a trio for clarinet, cello and piano, a sonata for horn and piano, a quintet for piano, oboe, clarinet, horn and bassoon (modelled on Mozart’s quintet for the same instruments, K452), and a number of pieces of Harmoniemusik. Beethoven’s sole essay in the serenade/divertimento idiom is his early Sextet in E flat major, Op 81b. The work has a deceptively late opus number because it was not published until 1810, but it seems to have been written around 1795, in the period when Beethoven was beginning to make his way in Viennese society as a composer and keyboard virtuoso after a period of study with Haydn – who left for his second trip to England in January 1794. It is not known whether the work was written for a particular occasion, but it was issued by the Bonn publisher Nicolaus Simrock, who played second horn in the electoral orchestra at Bonn, and had been a friend of Beethoven’s since 1789 when the composer joined the orchestra as a viola player. Simrock published a number of Beethoven’s works, including the ‘Kreutzer’ sonata, Op 47, and the variations for flute and piano, Op 107, and it may be that the sextet was written for performance by the Bonn horn player and some of his colleagues. The work has the light-hearted, easy-going tone of the serenade/divertimento tradition, though it is in only three movements – most serenades have at least five – and the horn parts occasionally have the sort of brilliant passage-work we associate with horn concertos or soloistic chamber pieces with horn, such as Haydn’s divertimento in E flat for horn, violin and cello, or Mozart’s quintet in E flat, K407, for horn, violin, two violas and cello. Indeed, K407 is particularly close in style and mood to Op 81b, and was probably the main model.

The four or five years that separate Op 81b and the Septet in E flat major, Op 20, was a period of rapid growth for Beethoven in terms of his career as a performer as well as his development as a composer. In that time he wrote his first significant piano sonatas, including the ‘Pathétique’, Op 13 (published in 1799 and a landmark of the genre), a number of string trios, violin sonatas and cello sonatas, and, above all, the six revolutionary string quartets that were eventually published as Op 18 in 1802. The ‘Pathétique’ and the Op 18 quartets are eloquent evidence that Beethoven was becoming dissatisfied with the settled forms, styles and patterns of the Classical style, and was espousing novelty, at times virtually for its own sake.

In its own way, the septet was as much a novelty when it first appeared as these overtly revolutionary works. It was written in the winter of 1799/1800, and was given its premiere at the first of Beethoven’s benefit concerts, in the Burgtheater on 2 April 1800. The concert also included the first performance of the Symphony No 1, a piano concerto and an improvisation by the composer, as well as music by Haydn and Mozart. The septet was published by Hoffmeister in Leipzig in 1802 and was an immediate and lasting success. The work conforms to the serenade/divertimento tradition in its architecture: there are six movements, the standard four of the late-Classical sonata or symphony, a set of variations on a popular tune (the Rhineland song ‘Ach Schiffer, lieber Schiffer’), and a scherzo marked Allegro molto e vivace. The practice of framing a central movement with two minuet-like movements was well established at the time and is found in Mozart’s serenades, as is the idea of making the second faster and more scherzo-like than the first. Beethoven increased the sense of symmetry by giving the first movement a grand and expansive slow introduction – a device that had originated in the symphony and was still uncommon in chamber music – and by matching it with a slow introduction to the final Presto.

In matters of scoring, however, Beethoven broke entirely new ground. In eighteenth-century serenades wind instruments usually come in pairs, like animals in the Ark, but the septet only has a single clarinet, horn and bassoon. Indeed, there is only one of each instrument, since the ‘string quartet’ consists of violin, viola, cello and double bass – the latter included to lend weight to the ensemble, and because it had traditionally been a member of serenade ensembles. By this means Beethoven freed himself from using his instruments in their traditional roles: the bassoon rarely plays the bass, just as the cello is free to take a tenor part, or even soar into the treble clef. Also, the relationship between strings and winds is more flexible and varied than before. There is antiphonal writing between the two groups, ‘orchestral’ passages with the wind supporting the strings with held chords, florid wind solos and duets accompanied by the strings, and concerto-like passages for solo violin (written for the virtuoso player Ignaz Schuppanzigh) accompanied by the rest of the ensemble.

With its mixture of grandeur and intimacy, virtuosity and informality, Beethoven’s septet appealed enormously to his contemporaries. Indeed, its composer eventually came to resent its popularity, believing that it had overshadowed his more mature works. Arrangements of it were quickly made, for piano duet, and as Harmoniemusik. And it was imitated to the extent that a new genre of large-scale chamber music developed. The Beethoven combination was later used by, among others, Conradin Kreutzer and Berwald, and (with the addition of a second violin) by Schubert in his octet of 1824. Spohr published an octet in 1814 for clarinet, two horns, violin, two violas, cello and bass, and a nonet in the next year with a flute and oboe added to the Beethoven combination, an ensemble also used by George Onslow. By 1850 the genre had been largely superceded, though Brahms originally conceived his first orchestral serenade of 1857/8 as a nonet, and it has been revived in our own time by such works as Howard Ferguson’s octet.