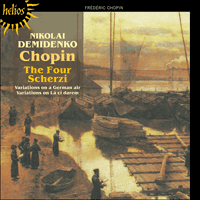 ‘These works require the utmost in panache and glitter, Demidenko's scintillating fingers provide that in spades’ (Gramophone)
‘Demidenko is one of the most outstanding modern Chopin players … as usual, Demidenko's superb technique is plainly at the service of the music, and he produces a breathtaking sense of mometum’ (International Record Review)
‘A pianist of outstanding imaginative vitality as well as technical brilliance’ (The Good CD Guide)
‘Awesomely gifted’ (The Times)
‘This very fine recital is in a class of its own’ (CDReview)

It was … an unforgettable picture to see [Chopin] sitting at the piano like a clairvoyant, lost in his dreams; to see how his vision communicated itself through his playing, and how, at the end of each piece, he had the sad habit of running one finger over the length of the plaintive keyboard, as though to tear himself forcibly away from his dream. (Robert Schumann)

In the history of piano playing, of piano composition, Chopin was a man alone. Celebrated by his contemporaries and successors, by all the great pianist–composers of the Golden Age, the enchantment of his genius was to bewitch an epoch and beyond. To Balzac he was an ‘angel’; to George Sand he was ‘divine’; for Liszt he was ‘God’. A private person, a gentle artist, a musician of the profoundest vision, grand master of the concentrated and the encapsulated, there is no one with whom he can be compared.

Emotionally a high-romantic, by conviction a classicist (he worshipped Bach, revered Beethoven, and played Mozart at his last Paris concert), temperamentally less a nationalist, more an urbane sophisticate, Chopin spent his first twenty formative years, over half his lifespan, around Warsaw. Imbued from earliest childhood with feelings for the history and legacy, the joys and sufferings, the beauty and melancholy, the aristocracy and peasantry of his race, he was proud to be a Pole. He found it easy and natural to think and express himself in terms of traditional Polish dance types – the imperial polonaise, the country mazurka, the southern krakowiak, the Mazovian kujawiak. To the end of his days he spoke Polish. As an émigré he followed Polish affairs and matters closely. In Paris, in common with his compatriot poets Mickiewicz and Witwicki, he cherished his Polish identity for the spiritual anchorage it offered him. He needed it for the well-being of his personality, for the comfort of his soul, for the memories it resurrected within him. In Polish, after all, to paraphrase Jerzy Kosinski, he could always weep: in French he could only ever but ‘register a state of sorrow’.

‘How does one play Chopin?’ a girl once asked Heinrich Neuhaus. ‘Very, very well, my darling.’ A calculated style of performance, appropriate for some nineteenth-century repertoire or, in the hands of certain pianists, for late Beethoven, fails completely in Chopin. To begin to recreate Chopin’s music you need to have a well-thought-out sense of structure allied with a refined quality and variety of pianism, together with a feeling for improvisation and rhythmic/temporal flexibility. It is important, too, to know that the dynamic form of any Chopin piece, in keeping with his fundamental classicism, will always be balanced around one climax, never two.

‘Look at these trees!’ Liszt told one of his pupils; ‘the wind plays in the leaves, stirs up life among them, the tree remains the same. That is Chopinesque rubato.’ Rubato in Chopin is like pedalling: you only apply it when you have to, intentionally and never accidentally. And you heed Chopin’s advice that while you may deviate from an established tempo, while you may contract or expand the rhythmic pulse, you must always return to it. Almost without exception, the role of the left hand is critical. Consistently (as an accompaniment) it has a function akin to that of the second violins or violas in a classical orchestra; it supports the whole and keeps the musical structure together. Whatever the fantasy or rhythmic licence of the right hand, the left, more or less, remains the intelligently listening, light-sensitive time-keeper of Chopin’s world.

Chopin was an absolute master of pedalling: the markings in his scores, however, are often sufficient only to indicate the barest of possibilities. The una corda pedal, which he is reputed to have used generously in his playing, is not indicated at all, in either his autographs or the first published editions. Pedalling is a personal matter, dependent on venue, acoustic, instrument, mood. Chopin rarely created dissonance by pedalling through pitch or harmony changes.

In Chopin musical power is not synonymous with physical power. Revealingly, you can contradict his loud dynamics without damaging his intentions. If Chopin’s contemporaries are to be believed, he seldom played his music the same way twice. And we have it on the authority of Sir Charles Hallé that when Chopin, at his final Paris recital (at the Salle Pleyel on Wednesday 16 February 1848), played his Barcarolle, he did so by changing the dynamics of bars 84ff. from forte crescendo to pianissimo, ‘but with such wonderful nuances, that one remained in doubt if this new reading were not preferable to the accustomed one’. Always challenging, Chopin’s art, a galaxy of finely harmonized, finely tuned balances, is about suggestion and impression. ‘I indicate’, he told von Lenz in 1842; ‘it’s up to the listener to complete the picture.’

The first Scherzo, assertive and demanding, is the defiant product of a man young and energetic yet drawn by anxiety: at the time of its conception, Chopin was en route between Vienna and Paris, his homeland bloodied by the armies of the Tsar. The fourth, in contrast, is about endings, about life’s twilight. Its qualities are elusive. If you leave it alone, if you give it no care, it will have no reason to live. If you touch its heart too forcefully, if you release its improvisatory soul, if you let it fly away, it will crumble and die. Judgement of tempo is crucial. Unless a broadly common speed is maintained, for instance, it is quite impossible to fuse its many different, short paragraphs into a convincing whole. But what may be right for the first page may not necessarily be so for the second. So, if musical coherence is to be achieved, a compromise has to be found. The romantic piano masters of the past – Pachmann, Rachmaninov, Busoni, Hofmann, Paderewski, Friedman, Horowitz – all had a secret: from their playing, it could never be said with certainty whether or not they were being serious or teasing. With Chopin this factor is a built-in element of his music.

The middle section of the fourth Scherzo holds the clue to the whole piece. Free of duality, it lets us glimpse the deepest of thoughts, the saddest of intimacies. In the darkest recesses of its individuality, photographic Chopin seems to be only just around the corner. In the hellish, Dante-esque first Scherzo, by comparison, the character of the trio – which (unusually for Chopin) quotes directly from an old Polish Christmas song, Sleep, little Jesus, sleep, my little pearl – is completely different. Here we have slow music of a most dramatic tension, where static peacefulness is progressively offset by growing conflict leading to eventual infernal disintegration.

Innocent and harmless, born of childhood and untroubled times, the variations on a German national air (1826) – actually not so much German as Tyrolean Austrian – can be seen as a preparation, in kind and method, for the larger scale canvas of the Là ci darem variations, Op 2 (1827). A Mozart hommage of particularly imposing gesture, written originally for piano and orchestra and first played in such form at the Kärntnertortheater, Vienna, on 11 August 1829, with the composer himself as soloist, this work has for its basis a well-known tune from Don Giovanni – the first act duet between Zerlina and the Don: ‘There we’ll take hands and you will whisper “Yes”. See, it’s close by; let’s leave this place, my darling.’ Combining grace with strength, poetic declamation with virtuoso bravura, the pageant of its imagination, the vibrancy of its creative flame, is remarkable. Writing in the Leipzig Allgemeine Musikalische Zeitung (7 December 1831), the young Schumann was to hail it fancifully and famously: ‘Off with your hats, gentlemen – a genius!’