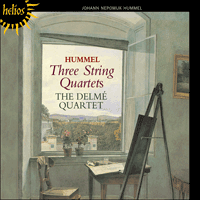 ‘Graceful and inventive works, easy on the ear, fresh in invention and refreshingly unpretentious. They should give a lot of pleasure’ (Gramophone)
‘His trade-mark invention never flags, allied with grace and sophistication and a gift for melody second to very few. A fitting tribute to one of the least pretentious of composers’ (The Observer)
‘The advocacy of the Delmé Quartet is persuasive and artistically unwavering. Their well-defined and technically accomplished readings are filled with vitality and spirit and marked by a thoughtful but not calculated and otherwise fussy approach that might hamper the spirit of the music’ (Fanfare, USA)
«L'interprétation du Quatuor Delmé est excellente» (Le Monde de la Musique, France)

Johann Nepomuk Hummel was born in Pressburg (now Bratislava in western Czechoslovakia) on 14 November 1778, the son of a musician. He was a remarkable child prodigy, reading music at four, playing the violin at five and the keyboard at six. He went on to study with Mozart and at the age of ten began to tour Europe as a keyboard virtuoso in the company of his father. Comparisons with Mozart, who trod a similar path two decades earlier, were inevitable. The English amateur musician William Gardiner wrote that the youthful Hummel was ‘the most surprising performer’ that had ever visited England ‘except the young Mozart’. As an adult, however, Hummel was rather more successful than Mozart in obtaining well-paid and satisfying posts. In 1804 he succeeded Haydn as director of music in the Esterházy household; the appointment, perhaps inevitably, was not altogether successful, and he was dismissed in 1811. After a few years as a freelance composer and performer in Vienna, Hummel became Kapellmeister at the Stuttgart court in 1816, moving to Weimar in the winter of 1818/19. Here he was able to combine financial security with a good deal of freedom: he conducted the court opera, had ample time to compose and teach privately, and made a number of lucrative foreign tours. By the early 1830s his style of composing and playing began to seem old-fashioned, and his popularity waned. Nevertheless, he was still a rich and famous man when he died at Weimar on 17 October 1837.

Hummel is mainly remembered today as a keyboard virtuoso, and the author of grateful but slight pieces for unusual chamber combinations – such as his Sonata in C minor for piano and mandolin, or the extraordinary ‘Septett militaire’ in C for piano, flute, violin, clarinet, trumpet, cello and double bass. In his own time, however, Hummel was taken much more seriously as a composer. He contributed prolifically to virtually all the genres of the day – opera, singspiel, ballet, church music, occasional choral music, dance music, the concerto, chamber music and, of course, piano music (three of his piano sonatas have been recorded by Stephen Hough on Hyperion CDA67390). Significantly, the one genre conspicuous by its absence in Hummel’s output is the symphony, for it was largely through his revolutionary series of symphonies that Beethoven established his reputation as a composer, and Beethoven was Hummel’s chief rival in Vienna. The two composers managed to maintain reasonably friendly relations over several decades, despite constant warfare between their friends and disciples and despite a number of unfortunate incidents. Hummel inserted several allusions to the ‘Eroica’ Symphony in his Clarinet Quartet of 1808, apparently in a satirical vein, while Beethoven supposedly had an amorous interest in Hummel’s wife Elisabeth and sometimes failed to hide his opinion of Hummel’s abilities – notably when he tore up Hummel’s four-hand arrangement of his overture to Fidelio and gave the task to Moscheles.

The root of the problem, of course, was that Hummel and Beethoven were the main Viennese protagonists in the debate that developed in German-speaking countries in the early nineteenth century between conservative and progressive composers; between those who were content to develop the Classical musical language within its established forms, and those who felt that the style of Mozart and Haydn had outlived its usefulness and needed reforming root and branch.

Hummel’s three Opus 30 String Quartets – his only contributions to the medium – are particularly fascinating works in this context, for they were composed in or shortly before 1804 in the wake of Beethoven’s revolutionary Opus 18 Quartets, published in 1801. The first years of the new century saw the string quartet established as the most important genre of chamber music. The Italian composer Giuseppe Maria Cambini even claimed, in an article published in the Allgemeine Musikalische Zeitung in 1804, that quartet playing was the highest form of musical life. This was the period when the medium began to be defined by its past: a ‘complete’ edition of Haydn’s Quartets, for instance, was issued by Pleyel in 1801, who followed it soon after with a ten-volume set of miniature scores, a landmark in the genre – and in the history of publishing.

Hummel’s quartets certainly draw on much of the history of the Viennese string quartet. Their basic idiom is the ‘dialogue’ type of writing, half motivic, half contrapuntal, that Haydn developed in his later quartets as a means of creating true equality between the parts. In much of Op 30 No 2 or in the remarkable Andante of Op 30 No 3 Hummel seems to have been interested less in the ‘dialogue’ style than in a wholesale revival of Baroque contrapuntal techniques; a passage in the latter even seems to be alluding to ‘Comfort ye’ from Handel’s Messiah, popularized in Vienna by Mozart’s version of 1789. Counterpoint had always been important to Viennese quartet composers. Many early examples are cast in the form of a prelude and fugue; canonic minuets and fugal finales are common in quartets of the 1770s, such as Haydn’s Op 20; Mozart continued the tradition with his remarkable Adagio and Fugue of 1789, and in his quartet arrangements of Bach keyboard fugues (though their authenticity has been disputed). A set of contrapuntal quartets by Florian Gassmann (1729–1774) was published as late as 1804. Hummel made a distinctive contribution to this tradition by combining learned counterpoint with a popular style derived from Austrian folk music, as in the haunting Allemande of Op 30 No 3 (a waltz-like contredanse, not the grave duple-time dance of the Baroque period), or the Menuetto of Op 30 No 2. In the latter a severely contrapuntal minuet in G minor makes a startling contrast with the entrancing G major trio, which uses shifting combinations of pizzicato and coll’arco to evoke the sound of a village band. Hummel modifies the conventional form of the eighteenth-century minuet and trio by adding an extra repeat of the trio at the end – an inspired touch.

In Op 30 Nos 2 and 3 Hummel does not venture much beyond the idiom of late Haydn, but the C major Quartet, Op 30 No 1, seems to be his response to the challenge set by Beethoven in his Op 18. Beethoven’s influence is most marked in the work’s harmonic planning. The work opens with a slow introduction in C minor rather than the expected C major, and has an Adagio in E major. Beethoven made a feature of juxtaposing movements a third apart in his Op 18, but the present case is particularly piquant because the trio of the preceding C major Menuetto is in A flat, at the opposite end of the harmonic spectrum from E major. Hummel also uses Beethovenian harmonic patterns within movements. A good example is in the exposition of the Allegro ma non troppo, which moves away from C major by a series of sudden upward modulations, into D minor and then E minor. Hummel’s melodic style is generally more relaxed and discursive than Beethoven’s, though the violent accents and displaced phrase lengths (producing the effect of 5/4 bars) of the passage just mentioned recall his great rival, as do the chromatic scales and cross accents of the scherzo-like Menuetto. The trio has no internal repeats and acts as a development section, making the movement sound more like a symphonic scherzo of the 1820s or ’30s than an eighteenth-century minuet and trio.

Hummel may not have been successful in challenging Beethoven in the quartet medium – he did not return to it after Op 30 – but he certainly produced three remarkable and accomplished works that deserve a place in the modern repertory. They strongly suggest that we are wrong to think of Hummel as a composer of lightweight novelties.