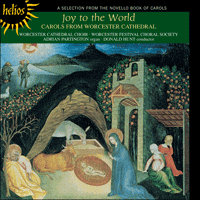 Joy to the World

A selection from The Novello Book of Carols

All the carols on this recording are from an outstanding collection of ninety carols, compiled and edited by William Llewellyn and published by Novello & Company in 1986. The collection offers a strong, practical mix of contrasted carols, aptly suited to today’s choral needs. From Giovanni Gabrieli to Judith Weir, medieval melodies to spirituals, the range of styles in The Novello Book of Carols encompasses a wide spectrum of tastes. Fresh arrangements of carols central to Christmas are set beside original compositions, and some fine medieval words contrast with new contemporary texts. There are sixteen new carols and a further thirty-nine arrangements published for the first time, while sixty-nine titles are suitable for unaccompanied singing. For the adventurous choir this collection includes several carols in their original language (French, Catalan and German), with alternative English versions also provided.

Besides the traditional cathedral, church or choral society use of The Novello Book of Carols, unaccompanied and with organ as on this recording, there are opportunities to perform selections from the collection in other ways. Optional orchestral versions are available (on hire from Novello) for twenty-five carols. Twenty-one carols have been published as The Novello Junior Book of Carols, designed specifically for schools without an SATB choir, the settings – for unison or two-part voices together with tuned and untuned percussion, two melody parts, guitar chords, bass line and simplified piano – are all compatible with the ‘parent’ book and provide the ideal opportunity for school and adult choirs to combine in performance.

William Llewellyn is a well established figure in the world of choral music. After reading Natural Science at Emmanuel College, Cambridge, where he was awarded a Choral Exhibition, Llewellyn continued his education at the Royal Academy of Music, studying composition with both William Alwyn and Eric Thiman. During his time at the Academy, Llewellyn founded the Linden Singers, and was active as conductor with this highly versatile group. Following a recital at the Wigmore Hall and an appearance on BBC TV’s Music at Ten, regular broadcasts and tours abroad, including Holland and Spain, brought the Linden Singers and their conductor much acclaim and success.