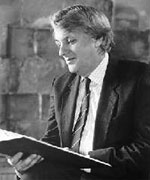 see also Donald Hunt (organ)
Donald Hunt was born in Gloucester, where he became a cathedral chorister and an articled pupil of the cathedral organist, conductor and composer, Dr Herbert Sumsion, to whom he became assistant organist at the age of seventeen.

After a short spell in Torquay, Donald Hunt was appointed director of music at the renowned Parish Church of Leeds and, while in Yorkshire, became conductor and choir trainer of several notable choirs such as the Leeds Philharmonic, the Leeds Festival Chorus and the Halifax Choral Society. For his work in Yorkshire – he was also Leeds City Organist and an academic lecturer at the Leeds College of Music – he received a doctorate in music from the University of Leeds. Dr Hunt was appointed Organist and Master of the Choristers at Worcester Cathedral in January 1976, a post he held until August 1996, during which time he was artistic director and conductor of eight Three Choirs Festivals. He has also enjoyed a long and happy association with the Bromsgrove Festival.