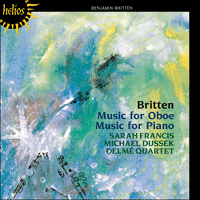 Music for Oboe & Music for Piano

‘One of the most magical discs of Britten yet made’ (Fanfare, USA)
‘I can highly recommend this CD for the wonderful mixture of Britten's chamber works and the all-round excellent playing’ (Musician)
«Michael Dussek s'y montre remarquable. Sarah Francis qui dispose d'une gamme dramatique et expressive exceptionelle» (Répertoire, France)

The time-span of the small but not insignificant body of chamber music which Britten wrote for solo oboe extends from the days of his first London successes as a student composer at the Royal College of Music in the early thirties to the year 1951 when—though still not without his detractors—he had become recognized by the public as a genius of the first rank. This was a momentous period in his development. After work as a composer for the GPO Film Unit and the so-called Group and Left Theatres in London he left in 1939 for America, only to find himself irresistibly drawn back to England and his Suffolk roots in 1942, with Peter Grimes stirring in his creative imagination. The great success of Peter Grimes in 1945 established its thirty-one-year-old composer as a new voice in English music and the white hope of English opera. There followed in rapid succession the tragedy The Rape of Lucretia and the comedy Albert Herring, and Billy Budd was now almost ready for its premiere at the Royal Opera House in December.

Opera apart, Britten had also committed himself to the other genre that was to prove central in his creative life through his association with the singer Peter Pears: the beautiful Serenade for tenor, horn and strings and the passionate Holy Sonnets of John Donne were the latest in a line of song-cycles that had begun in 1936 with the disturbingly brilliant Auden collaboration, Our Hunting Fathers.

The first of the oboe pieces from these years is—despite its youthfulness of expression—perhaps the most important: the consummately crafted Phantasy Quartet for oboe and string trio which dates from 1932 and followed hard on the heels of Opus 1, the Sinfonietta for chamber orchestra. The Quartet was dedicated to and first performed by Leon Goossens in August (the BBC broadcast premiere) and November 1933 (London concert premiere). It scored Britten’s first international success the following April when it was performed at the International Society of Contemporary Music in Florence. As in Mozart’s Oboe Quartet it is the oboe which dominates the ensemble as first among equals. The Phantasy is constructed in arch form and—remarkably for its time in pre-war England—its intricate structure suggests that the brilliant young composer in his final year at music college had already absorbed the idea of sonata-cycle compression contained in Schoenberg’s First Chamber Symphony. Stealthily emerging from and returning to the silence in which it began, the work is framed by a march introduction and postlude. In this introduction the solo oboe enters for the first time molto pianissimo with the main theme which (while continuing to play its part in the scheme of things) proves the source of the ‘new’ contrasted themes of a terse sonata-allegro. At the climax of the development section the pace (but not, for several more bars, the developmental intensity) slackens. Unexpectedly, a slow pastoral section now intervenes, with a lengthy elaboration of a new theme for strings alone before the oboe rejoins its companions to lead the music back to the recapitulation of the sonata-allegro and the march postlude. If the pastoral slow section echoes the leisurely folkiness of an Englishry that Britten had not yet entirely rejected, the Phantasy as a whole generates a tension and harmonic grittiness which are harbingers of a less complacent outlook.

Britten had already written his deft Two Insect Pieces for oboe and piano in 1935 when in the following year he returned to the medium with something more substantial. The next work to be completed after Our Hunting Fathers, the Temporal Variations are based on a lean and hungry funeral march ‘theme’ that seems unable to escape from its semitonal point of departure. The theme is as much a kind of wordless recitative as anything resembling a melody as such, and Britten exploits this loose shape in a number of free variations which ennoble or parody it according to the chosen character. In its mixture of menace and gay abandon, beauty and the grotesque, seriousness and slapstick humour we may glimpse something of the appeal which Shostakovich was to make to Britten when he encountered that composer’s music for the first time in his opera Lady Macbeth in London the following year. And if Britten steals unashamedly from Mahler, Bartók, Ravel and Schoenberg in these Variations of 1935 it is interesting that the March (III) was to provide the source for a striking bit of self-borrowing when he came to write the Marcia fourth movement of his Sonata for cello and piano in 1961. It is fascinating also to catch a glimpse in Oration (II) of the gleaming fanfare imagery of ‘Let the florid music praise’ in the forthcoming Auden cycle, On this Island, a type of imagery more thoroughly to be exploited in the cyclic process of Les Illuminations.

A gap of fifteen years separates the somewhat experimental exuberance of Temporal Variations from the assured mastery of the Six Metamorphoses after Ovid, written for performance by Joy Boughton on the Meare at Thorpeness on 14 June 1951 during the Fourth Aldeburgh Festival. Like pieces of statuary in some classically conceived garden, these perfect miniatures catch the spirit of ancient Greece with playfulness, humour, compassion and tenderness. The sly languor of Pan, the ill-advised daring of Phaeton, the sad immobility of Niobe, the tipsy revelries of Bacchus and his troop of boys, Narcissus contemplating his own image, the tumbling fountain of Arethusa—all are caught in a perfectly conceived outdoor music that must have yielded pure enchantment at its first performance over the waters on that June afternoon.

Britten’s commitment to the piano lies essentially in his song-cycles. The official list for solo piano is slender indeed, but since the composer’s death in 1976 the archives have been mined to bring to light a number of early, forgotten pieces. There had been a precedent for this during the composer’s own lifetime. In 1970, at the age of fifty-seven, Britten himself was persuaded to publish Five Waltztes (Waltzes) culled from the enormous number of short piano pieces he had written between 1923 and 1925. As Britten wrote in his Preface to the 1970 Edition:

In 1925 came 10 Waltzes, including a Petite Valse—it seems sad that my French spelling was better than my English. Several of them were written before that, and since the composer was a very ordinary little boy, they are all pretty juvenile (here was no Mozart, I fear). But perhaps they may be useful for the young or inexperienced to practice …

The Holiday Diary (Tales) of 1934, dedicated in the first published edition of 1935 to Arthur Benjamin, the composer’s piano teacher at the RCM, were later—in a sense—re-dedicated on the manuscript given to Britten’s friend, the pianist Clifford Curzon (‘who made them his’). They show Britten’s sharp sense of the descriptive and that boyish sense of fun which never entirely deserted him. The exuberant ‘Early Morning Bathe’ (Britten loved swimming) is irresistible with its hesitant shivers before taking the plunge, its wave-like arpeggios gathering momentum into warmer tonal waters, and the shivers in reverse of its coda as the bather emerges from the water. ‘Sailing’ broaches a vein of melodic serenity (parodied in a turbulent middle section) that was to prove consistent in many a more emotionally serious situation in Britten. The delights of the ‘Fun-Fair’ (a brisk toccata-like rondo with descriptive episodes) are a riot of piano sonority. The work concludes with an atmospheric night-piece in which the ghosts of former themes from the suite float past.

And so to Britten’s last published work for piano solo—the Night Piece, composed in 1963 as a test piece for the first Leeds Piano Competition which was won by the seventeen-year-old pupil of Fanny Waterman, Michael Roll. The idea behind this composition was to put musicianship rather than mere virtuosity to the test. It is a quiet ternary design in B flat—very challenging in touch, legato melody and subtle use of pedal. The same gently falling motif of ‘Sailing’ forms a secondary theme here and the prevailing flow is broken by a cadenza of bird-song before the coda. The piece has been compared to the night musics of Bartók—a composer not without influence on Britten. But Britten’s own special feeling for night created a world of its own, and here is a miniature pendant to the preoccupations of the Serenade, the Nocturne and A Midsummer Night’s Dream. While we may regret that the projected piano piece for Sviatoslav Richter never materialized, here is a characteristic envoi.