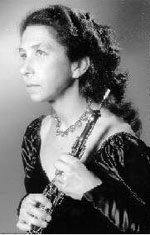 The leading oboe soloist Sarah Francis was born in London. Her parents were the flautist John Francis and the famous harpsichordist Millicent Silver. She studied with Terence MacDonagh at the Royal College of Music and with Pierre Pierlot in Paris.

Her first solo recording was of Benjamin Britten’s Six Metamorphoses after Ovid for oboe solo, which the composer invited her to play at the Aldeburgh Festival. Her third recording of these wonderful pieces is on the Hyperion Helios label. She has broadcast regularly for the BBC in recitals and concerto performances including the Royal Albert Hall Promenade Concerts, where she appeared with the London Symphony Orchestra playing Gordon Crosse’s concerto Ariadne which he composed for her. She has given many solo performances in the South Bank concert halls in London, and all over Britain, including the Mozart and Strauss concertos. In 1985 she played Lutoslawski’s Double Concerto for oboe and harp, conducted by the composer, at the Dartington International Summer School. Composers who have written works for her include Gordon Crosse, Stephen Dodgson, Gordon Jacob, William Mathias, Anthony Payne and Phyllis Tate.

Sarah Francis is a Fellow of the Royal College of Music and director of The London Harpsichord Ensemble. Apart from participating regularly at Dartington, she has given masterclasses at many leading European music conservatoires ranging from Moscow and Kiev to Geneva.

Her recordings for Hyperion include not only all of Benjamin Britten’s oboe music, but also Rutland Boughton’s Oboe Concerto No 1 with the Royal Philharmonic Orchestra conducted by Vernon Handley, the Oboe Concertos of Mozart and Franz Krommer, English music for oboe and piano including the important Sonata by Herbert Howells (of which she gave the belated world premiere), and some very attractive and unusual eighteenth-century Czech chamber works for oboe and strings.