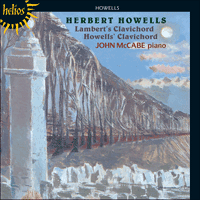 ‘A lovely collection. Can I have it on my desert island, please?’ (Gramophone)
‘Devoted performances from McCabe, glowingly recorded’ (BBC Music Magazine)
‘Some of Howells's most affecting and personal miniature invention, constantly illuminated by moments of exquisite chromaticism. Performances, recording and booklet notes are exemplary’ (CDReview)
‘These exquisite miniatures are performed to idiomatic perfection … and Hyperion's sound is unobtrusively natural to match. Here is perfect late-evening fare’ (Hi-Fi News)

All through my life I’ve had this strange feeling that I belonged somehow to the Tudor period not only musically but in every way. Ralph Vaughan Williams even had a theory that I was the reincarnation of one of the lesser Tudor luminaries.

Thus Herbert Howells nailed his colours firmly to the mast and at the same time explained the raison d’être of the music on this disc.

For Howells, the process of discovery of the music of the Tudor period was one of natural evolution. Events seemed to put him in the right place at the right time. His early days as articled pupil to Sir Herbert Brewer at Gloucester Cathedral brought him into contact with it in the perfect surroundings of that great building very early in his creative life. The real watershed, however, the moment of revelation, as he felt it to be, was the first performance of Vaughan Williams’ ‘Tallis Fantasia’ in September 1910 at the Three Choirs Meeting at Gloucester. Nothing like this work had ever been heard before. For Howells it was a moment of seminal importance. As he said to Christopher Palmer, ‘It was after then that I felt I really knew myself, both as a man and artist. It all seemed so incredibly new at the time, but I soon came to realize how very, very old it actually was, how I’d been living that music since long before I could even begin to remember.’

Having won a composition scholarship to the Royal College of Music, Howells was straightaway packed off to Westminster Cathedral by Stanford, his revered teacher, to hear R R Terry’s pioneering performances of Italian Renaissance and Tudor church music sung by the fine choir there. The effect on Howells was instantaneous. Within weeks he had written his Mass in the Dorian Mode for Terry, which became his first professionally performed work. The Mass shows just how quickly Howells had absorbed the style of this earlier age into his own language. He achieved this without resorting to pastiche, however, and this is what also marks out the clavichord music recorded here. Howells absorbed his influences thoroughly and passionately. His own response, however, was always to recreate the spirit of the earlier age whilst remaining true both to himself and to his time.

The three collections on this disc date from different periods of his life. Lambert’s Clavichord was written in 1927, and the two books of Howells’ Clavichord date from 1941 and 1961 respectively. The common thread between them is twofold: the recreation of the spirit of the Tudor keyboard dance pieces, à la Fitzwilliam Virginal Book (right down to the titles), and the immortalizing of many friends and colleagues through the dedication of each piece to a different person. Only revered and beloved RVW is honoured with a pair of pieces (a ‘Pavane’ and a ‘Galliard’). The wonderful thing, also, is the gentle absorption into Howells’ pieces of certain stylistic characteristics of the dedicatee’s music where he is a composer. Thus Finzi’s piece (‘Finzi’s Rest’, written the day following his untimely death in 1956) has a gently moving bass line so reminiscent of a number of Finzi’s most characteristic scores (Dies natalis, for instance), and Walton’s makes reference to his Coronation-style music, the march Crown Imperial in particular. Personality traits of the dedicatees also feature strongly in the manner (though not style) of Elgar’s ‘friends pictured within’ (‘Enigma’ Variations).

The inspiration for Lambert’s Clavichord came from the harpsichord- and clavichord-maker Herbert Lambert of Bath. Lambert was an unusual man who was also a highly gifted photographer, famous for photographing England’s leading musicians. Howells described him as having ‘a genius for photography, and for friendship. Also, he had the skill and passion to make harpsichords and clavichords, and did so, when he wasn’t photographing the famous people who delighted in being his subjects.’ Howells went on: ‘In the summer of 1927 he lent me a clavichord – an entrancing instrument. I gave up a holiday, remaining in London with it. The only way to thank Lambert was to write a work for him. So I did ‘Lambert’s Fireside’ – actually written by his own fireside on the hills outside Bath.’

Howells, writing a note for the BBC in 1940, went on to say that he had added eleven other pieces, each named after a friend.

So there came into the book ‘Fellowes’s Delight’ (for Dr E H Fellowes, the great madrigal authority), ‘Hughes’s Ballet’ (for the Irish composer-critic), ‘Samuel’s Air’ (for Harold Samuel, pianist), ‘De la Mare’s Pavane’ (for Walter de la Mare, the poet); ‘Sir Hugh’s Galliard’ concerns Sir Hugh Allen, Professor of Music in Oxford University; ‘Sargent’s Fantastic Sprite’ is for Dr Malcolm Sargent, conductor; and ‘Foss’s Dump’ for Hubert Foss of the Oxford Press. ‘My Lord Sandwich’s Dreame’ is for the Earl of Sandwich – poet as well as Peer of the Realm. H E Wortham (most famous now as ‘Peterborough’ of London’s Daily Telegraph) has ‘Wortham’s Grounde’; and ‘Sir Richard’s Toye’ was for Sir Richard Terry of Westminster Cathedral fame.