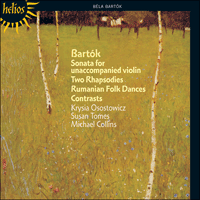 ‘An outstandingly successful and enjoyable issue’ (Gramophone)
‘A distinguished and well recorded issue’ (The Penguin Guide to Compact Discs)
‘This music has never sounded so seductive on disc … Everything is played with a glowing affection and naturalness’ (International Record Review)
‘Enthralling programme … a riveting account of Bartók's Sonata … fiery intensity, commanding technique and perfect intonation’ (The Strad)
‘Go out and buy a copy’ (Classic CD)

The violin consistently seems to have brought out of Bartók a special combination of lyrical intensity, brilliance and ingenuity. Partly this is because the instrument is so central to the folk music that Bartók adored. But Bartók also had the fortune to be closely associated with first-rate violinists: for the Hungarian virtuoso Yelly d’Aranyi he wrote his two violin-and-piano sonatas in 1921 and 1922, and for his other compatriot friends Jószef Szigeti and Zoltán Székely he composed the two violin Rhapsodies, again as a complementary pair, in 1928.

Szigeti and Székely were much more than just performing dedicatees, for their particular skills and creative ideas had a strong effect on not only Bartók’s violin writing but also other facets of his creative output. It was Székely who had the idea of transcribing the six Rumanian Folk Dances for violin and piano from Bartók’s original piano setting, and who later commissioned Bartók’s second Violin Concerto. In turn Szigeti, with whom Bartók gave many concerts, came into his own during the difficult last years of Bartók’s life, quietly and sometimes secretly securing for his friend major commissions, including the Contrasts and Concerto for Orchestra.

Bartók generally viewed his music as falling into two categories – either settings of existing folk music, or completely original compositions that nonetheless took their inspiration and melodic nature from folk music. It seems that he found this a fertile combination, the authentic folk material standing as a yardstick beside his own inventions as well as permeating the spirit of the latter. His six Rumanian Folk Dances of 1915 are one of the clearest examples of the first category, folk tunes set initially for piano in a manner simple enough for competent children to play. Székely, doubtless sensing that some of them were in the first place fiddle tunes, made the present transcription in 1925, with Bartók’s full approval. He may also have had Bartók’s collaboration, for the transcription includes a few changes of key from Bartók’s piano setting, as well as embellished repetitions and elaborated textures. Bartók accompanied this version himself on several occasions, and recorded it with Szigeti in 1930.

The nature and sequence of the dances are of some interest, and most information about them comes from Bartók’s students. The first piece is a stick dance, the sticks garlanded with flowers; according to different accounts it is danced by either boys (who kick towards the ceiling) or by older men (who bang the floor). The second dance features sashes or waistbands, and the third, to a flute melody, is danced on the one spot. The remaining three are probably gypsy fiddle melodies, identified respectively by a place name, as a Rumanian polka, and as a dance that takes small or short steps. Some of Bartók’s pupils recount a further thread to the sequence, as scenes from a country wedding. In particular the flautist of the third dance is the shepherd bridegroom himself, the singer of the fourth (rather than violinist) is the bride-to-be, the Rumanian polka is danced by the men only, and the final dance is a general rejoicing.

Bartók regarded his two violin Rhapsodies as basically folk music arrangements, but their more elaborate forms are of his own composition. Both of them build on the standard gypsy csárdás sequence of lassú and friss (slow and fast) and use mostly Rumanian folk tunes from Transylvania, though with some added colouring from Hungarian and Ruthenian melodies. Otherwise they make quite a contrast, the first Rhapsody more swashbuckling in its opening lassú (perhaps telling a tall tale, judging by the ‘Hungarian sneezes’ of disbelief that punctuate it), the second Rhapsody more alluring and mysteriously passionate. However, the second Rhapsody is the wilder of the two in its friss, starting from a stamping barn dance and progressively daring itself to ever more hair-raising feats. In the character of folk music, Bartók found it hard to decide how to end either Rhapsody. Szigeti claimed that his manuscript copy of the first Rhapsody contains thirty-nine unpublished bars, and even the published score offers a choice of two endings (the present recording uses the first, and Bartók and Szigeti recorded the piece twice with the second). The second Rhapsody also began life with a longer ending, printed in early editions before being revised in 1945 to the version heard here.

For Contrasts we have to thank the fertile and loyal imagination of Szigeti – or in his own words ‘a brainstorm I had in 1938’ – which resulted in him persuading the jazz clarinettist Benny Goodman to commission a trio from Bartók. Originally the plan was for another two-movement Rhapsody in the lassú–friss format, each movement capable of fitting on one side of a 78rpm disc. This, indeed, was how the work was first billed and performed in January 1939, at a New York concert by Goodman, Szigeti and Endre Petri. By 1940, when Bartók joined Goodman and Szigeti for a Carnegie Hall concert and a gramophone recording, the work had acquired its present title (decided together by Bartók and Szigeti one evening on Park Avenue) and, more importantly, its central ‘Pihenö’ movement (literally, ‘Taking a rest’; in this case an evocative outdoor nocturnal scene, coloured by a few suggestions of Indonesian gamelan).

The similarities and differences from the earlier rhapsodies are interesting. If the melodies are now Bartók’s own, the lassú–friss gypsy sequence remains across the outer movements, under the titles ‘Verbunkos’ (an old army recruiting dance) and ‘Sebes’ (Quick). A more novel aspect to the work, recounted by Benny Goodman, is that Bartók derived inspiration by listening to recordings of Goodman’s jazz trio with Teddy Wilson and Gene Krupa. As with Gershwin, whose music had already sounded a few echoes in Bartók’s Mikrokosmos, Bartók doubtless appreciated the affinities with folk idioms, and he later confided to Szigeti that the opening of the ‘Verbunkos’, while following his normal lassú tempo, was equally inspired by the ‘Blues’ from Ravel’s Violin Sonata. (‘Spot-the-resemblance’ seems to have been a sport between Szigeti and Bartók; Szigeti relates that in rehearsal they came to refer to the transition at bar 169 of the finale as ‘Scarlatti’.)

Clowning is rarely far from Bartók’s music, despite its over-austere reputation. Among the outright gags in Contrasts, the first movement contains an unmistakable parody of a wind-up gramophone running down – perhaps an impish reference to the work’s terms of commission, combined with memories of Bartók’s years of folksong collecting on wax cylinders? Similarly, the mistuned violin that opens the finale may be mostly peasant ribaldry, but could just also be a facetious prod at Saint-Saëns. As the burlesque gets properly under way the violinist changes to a properly tuned instrument, while the others literally twiddle their thumbs or fingers, repeating a trite little ostinato figure ad libitum until the violinist is ready to continue. In the middle of the finale’s romp, though, lies one of Bartók’s most haunting inspirations, an extended lyrical episode set in ‘Bulgarian’ 13/8 metre divided 3+2+3+2+3 – in effect a delicious type of elaborated rumba.

For much of 1943, isolated and unhappy in the USA, Bartók was dangerously ill with a fever that was probably the onset of his fatal leukaemia. Discreet help from Szigeti and others allowed him some rest and financial security, and in the autumn, somewhat recovered, he heard the young Yehudi Menuhin play his second Violin Concerto and first Violin Sonata in separate concerts in New York. Bartók was overjoyed not only to hear his music played at all, but so well: on meeting Menuhin he exclaimed that he had always thought music only received such performances long after its composer’s death. Menuhin promptly commissioned a solo violin work, and Bartók’s health stabilized enough over winter for the present solo Sonata to be completed by 14 March 1944.

That and the third Piano Concerto were the last two works whose music Bartók completed; at his death in 1945 both works remained not fully edited for publication. Bartók had the consolation of hearing Menuhin give the solo Sonata’s premiere in ‘a wonderful performance’ in November 1944, just a few days before another magnificent premiere, that of his Concerto for Orchestra. In its four-movement span the solo Sonata is one of the largest musical risks Bartók ever took; in his own words after the premiere, ‘I was afraid it was too long; imagine … a single violin for twenty minutes. But it was quite all right, at least for me’. If the titles of its first two movements suggest Bach, those of the last two suggest folk tradition; in reality all four movements blend folk and Classical tradition with breathtaking virtuosity. In specifying ‘Tempo di ciaccona’ Bartók took the additional risk of making the first movement not literally a chaconne (it only follows chaconne tempo) but a full-scale sonata structure.

As in earlier years with Székely and Szigeti, Bartók left Menuhin some freedom in details of performance, offering a few alternative readings, particularly in the finale where a substantial passage can be played either with quarter-tone intervals or more conventionally in semitones. Menuhin chose the latter, and this reading was adopted in the work’s publication after Bartók’s death. More recently Bartók’s initial quarter-tone version has become available, and can be heard on the present recording.