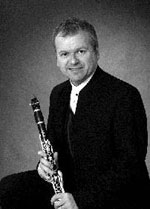 see also Michael Collins (conductor)
The British clarinettist Michael Collins is one of the most sought-after and successful wind players of his generation. At the age of sixteen he won the woodwind prize in the first BBC Young Musician of the Year Competition, and at twenty-two made his American debut at Carnegie Hall, New York. Since then he has performed as a soloist with many of the world’s major orchestras and most renowned conductors.

Michael Collins has done much to promote the clarinet concerto repertoire of today’s notable composers: he gave the premiere of John Adams’ Clarinet Concerto Gnarly Buttons (which was written for him) at London’s South Bank Centre conducted by the composer, and the UK and Dutch premieres of Elliott Carter’s Clarinet Concerto.

Michael Collins is also in demand as a chamber musician, regularly performing with the Lindsay and Belcea string quartets, Martha Argerich, Stephen Hough, Mikhail Pletnev, Lars Vogt, Joshua Bell, Steven Isserlis and Isabelle van Keulen. In 2001 he was featured as International Artist in Residence for the 2001 Bath International Festival, and in June 2002 as guest artist in a series of chamber concerts with other eminent musicians at London’s Wigmore Hall.

An appreciation by Edward Greenfield, critic and broadcaster . . .

It is a key sign of great artistry when a musician regularly magnetises the ear from the very first phrase. We all know and recognise the immediate and individual illumination of a Heifetz, a Casals or, in our own time, of pianists like Murray Perahia. It is a far rarer experience when we recognise this quality in a wind-player. Yet from his boyhood onwards -- when, at sixteen, he came first in the wind category of the 1978 BBC Young Musician of the Year Competition -- Michael Collins has played his clarinet with this supreme magic ingredient. There are dozens of recordings by the Philharmonia Orchestra (of which Collins was principal clarinet for six years), of The Nash Ensemble, or of The London Sinfonietta, when suddenly a clarinet melody will float out with new intensity. And similarly so in live concerts.

Though he works so well as part of a team, selflessly responsive to the needs of the music, he is primarily one of nature's soloists. Having made his American debut at Carnegie Hall, New York, as long ago as 1984, he is now increasingly devoting his career to playing concertos and giving recitals. Not surprisingly, many artists of comparable stature have been eager to work with him, among them the viola players Yuri Bashmet and Tabea Zimmermann, the violinists Dimitri Sitkovetsky and Joshua Bell, and the cellist Steven Isserlis.

Equally, composers such as Richard Rodney Bennett and John Adams have been inspired by Collins's playing to write important works for him, and over the years he has recorded a wide range of clarinet repertory, not just accepted masterpieces but new and adventurous works too. So as a coupling for his DG recording of the Mozart Clarinet Concerto with Mikhail Pletnev and the Russian National orchestra, he plays the formidable arrangement for clarinet of the Beethoven Violin Concerto, specially made for him by Pletnev himself.

Pletnev has become a personal friend as well as a musical partner, one whose comparable artistry, whether as pianist or conductor, provides an extra spur. Collins' experience as an orchestral and chamber player has consistently helped him not just in tackling difficult repertory but in working with conductors and others in the concert hall and recording studio. What delights him more than anything is to feel the direct communication that an artist can have with an audience, particularly in a recital. Like some singers, he loves, at appropriate moments in recitals, to talk and explain the music he is about to play - always a winning personality.

Specially close to Michael's heart is the work he does with London Winds, the group he founded in 1988 featuring a wide combination of instruments and of repertory. As well as appearing in concerts and at major music festivals in Britain, London Winds under his direction have appeared in many European countries, notably France, as well as in the United States and Canada. Australia, South America and China are now on the list for visits abroad. Recording is also an important part of the work that he does with London Winds, with major works by Beethoven, Strauss, Spohr and Ligeti already issued.

Since he made his Prom debut in 1984, playing Thea Musgrave's Clarinet Concerto, Michael Collins has regularly appeared at the Proms, scoring a great success at the Last Night in 1993 in Sir Malcolm Arnold's Clarinet Concerto No 2. Though he counts it almost an accident that he finally concentrated on playing the clarinet, rather than the piano (his first love), here is an artist who has brought home the beauties and glories of his instrument to the widest audience, as only his greatest predecessors have done.