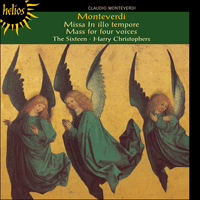 ‘It is doubtful whether [Missa in illo tempore] could ever be given a more persuasive reading’ (Gramophone)
‘Marvellous … The Sixteen sing with superb rhythmic vitality and great power’ (The Sunday Times)
‘Highly recommended’ (Fanfare, USA)

The listener seeking sixteenth-century church music at its best is likely to turn to settings of the ordinary of the Mass. This may in part be the consequence of the post-symphonic assumption that a Mass lasting half an hour is somehow more significant than a three-minute motet. But for the composer of the time too, the Mass was an important medium: often one in which he could display his skill on a large scale, honour a particular occasion or person (a saint or a patron), and sometimes pay homage to a fellow composer by choosing in friendly emulation to model his work on his themes. But as the century ended, the Mass became less important musically. One reason was the greater respect given to the meaning of the Mass. The Reformation’s arguments on the nature of the Mass, and the Catholic church’s reaction exemplified in the Council of Trent, diminished its use as an occasion for ostentatious display. It is significant that there are no complete Masses by Giovanni Gabrieli, who was writing for the church most famous for the musical elaboration of its ceremony, St Mark’s, Venice.

The fundamental changes of musical style in this period took place apart from music for the Mass. Sixteenth-century composers published books of masses and motets, but in the seventeenth century, these were replaced by collections of psalms, antiphons and solo motets intended as antiphon substitutes, usually written in the new stile concertato and intended chiefly for Vespers. The best-known example is Monteverdi’s Vespers of 1610, though that is unusual in its careful presentation of music for just one service. The music is in the new style, even the psalms for several voices requiring soloists and demanding a more virtuosic manner. An organ continuo accompaniment is necessary, and sometimes other obbligato instruments too. Masses appeared rarely, and tended to be written in a more traditional manner.

Monteverdi must have written considerably more than the three settings of the Mass which have survived. In 1601, when applying for the position as successor to Pallavicino as maestro di cappolla to Vincenzo Gonzaga, Duke of Mantua, he mentions his motets and masses, and in a letter of 1634, he implies that he was expected to write a new Mass every Christmas. In 1631, the thanksgiving for the end of the plague included a solemn mass by Monteverdi, with loud trumpets playing during the Gloria and Credo: the Gloria may perhaps have been the one published ten years later in his massive collection of Venetian service-music Selva morale. But it is significant that his concertato Masses were not published: there was evidently no market for them. Each of the three publications of Monteverdi’s church music begins with a Mass, but they are all in the old a capella style, contrasting with the concertato style that predominates in the rest of the collections.

Monteverdi is having printed an a capella Mass for six voices written with much study and toil, since he had to continually manipulate every note through all the parts, always further strengthening the 8 themes from Gombert’s motet In illo tempore. And he is also having printed with it some psalms for the Vespers of the Virgin, with various and diverse manners of invention and harmony, all on a cantus firmus. He intends to come to Rome this autumn to dedicate them to His Holiness.

This is a not-too-inaccurate description of the publication which appeared later that year in Venice, dedicated to Pope Paul V. This begins with a ‘Missa da capella a sei voci fatta sopra il motetto In illo tempore del Gomberti’, to quote the fullest version of the title, which heads the organ part. There is no contradiction in having an organ part to a Missa da capella: the term lacked the implications that a capella was later to acquire. There was, however, one place where church music always was sung unaccompanied, the Sistine Chapel in Rome; so it is not surprising that the copy of the Mass surviving there omits the organ part. Monteverdi visited Rome in the autumn of 1610 to present a copy in person, hoping to receive in return a scholarship for his son Francesco (and perhaps some advantage for himself as well). Although the entire publication of Mass and Vespers was dedicated to the Pope, it is likely that only the Mass was in fact presented, since the Vesper music was hardly in accordance with Papal taste: the Vespers were far more suited to Venice, where the edition was published and where the composer soon secured one of the most highly prized positions available, taking charge of the musical forces of the basilica of St Mark.

Nicolas Gombert was born in Flanders around 1495, studied with Josquin and spent most of his life as a member of the chapel of the Emperor Charles V. He was sacked for pederasty in 1540 and sentenced to the galleys: he was soon pardoned, but little is known of his subsequent career. He died between 1556 and 1561. There were connections between Gombert and one member of the Gonzaga family, Ferrante, to whom Gombert sent a motet in 1547; the library of the Gonzaga chapel, Santa Barbara, included at least one of Gombert’s published sets of motets. There is no obvious reason why Monteverdi should choose a work by him on which to model his Mass; but he was clearly intent in going back beyond the preceding generation of Italian composers to the Flemish sources of the polyphonic style.

Monteverdi self-consciously heads the work with a list of the themes he has extracted from Gombert’s motet (ten of them, in fact), perhaps because he realized that it would be unknown, perhaps to show that he was interested in the abstract treatment of the conventional thematic tags rather than in parodying it as a whole. Six-voice writing was becoming unusual for polyphonic writing: it is symptomatic that Palestrina’s most famous six-voice Mass, the Papae Marcelli, was rewritten after his death for the more fashionable four voices. In the Vesper psalms which completed the 1610 publication, Monteverdi shows impressive skill in writing idiomatically for many voices within the clearer harmonic patterns of the new style. In the Mass, the harmony is still generated from a bass line which is part of the contrapuntal network, though there is a clear sense of tonality. The texture is dense, with few rests for individual parts, and only one section of chordal writing, ‘Et incarnatus est’, which draws attention to the change to E major from the prevailing C major. The following ‘Crucifixus’ restores C major, but uses the highest four voices only. E major is again used for tonal contrast in the ‘Benedictus’. The final ‘Agnus Dei’ is for seven voices, following the tradition of adding an extra voice for the last section of the Mass.

In 1620, Giulio Cesare Bianchi issued two anthologies of motets, one in praise of God, the other of the Virgin. The former included four items by Monteverdi, among them Cantate Domino and Domine, ne in furore. The scoring is again for six voices, but the writing is considerably more relaxed and unselfconscious than in the Mass, with homophonic sections and a more integral and madrigalian relationship between word and note.

Of the two large collections of Monteverdi’s Venetian church music, the composer was responsible in some degree for the 1641 Selva morale, much of whose contents dated back at least a decade. After his death, the publisher Alessandro Vincenti collected ‘the sacred relics of the works of the most excellent Monteverdi’, beginning his volume with a ‘Messa a 4 voci da Cappella’. The composer shows himself to be particularly concerned with thematic economy, and much of the music is derived from the descending scale of a fourth and the rising thirds of the opening theme. The power of the descending fourth as a ground had been demonstrated in the Lamento della Ninfa; here it is less regular and often disguised. The vocal lines are more florid than in the 1610 Mass and nearer those of Monteverdi’s concertato music; the texture is varied with duets and trios, time changes and chordal passages with strong rhythms. In 1610 Monteverdi was looking backwards; but later in his life (there is no clue when the 1650 Mass was composed, but it is inconceivable that it antedates the 1610 one), he could write in a more uninhibited way, combining the practices of both old and new styles without incongruity, the fruits of his labours on Gombert’s themes being the contrapuntal freedom of this four-voice Mass.