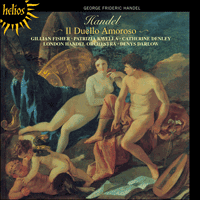 Cover artwork: Venus and Mercury by Nicolas Poussin (1594-1665)
Reproduced by kind permission of The Governors of Dulwich Picture Gallery, London

Handel left his native Germany for the first time in 1706 and journeyed to Italy, where he remained for about four years. It was one of the most important and fruitful periods of his life. Through his teacher at Halle, Friedrich Wilhelm Zachow, he had acquired the thorough technical grounding expected in a German church musician, and while composing and playing for the opera at Hamburg he had gained some impression of French and Italian styles, but only at second hand. To achieve his ambition of becoming an opera composer of the first rank he needed the experience of Italy itself—acquiring a good knowledge of the language, working with Italian singers and instrumentalists, and absorbing into his own compositions the colour and drama of the newest Italian music.

What Handel wanted above all in Italy was to perfect his skill in writing for the voice. This aim, however, was not best achieved in the hectic and sometimes acrimonious conditions of the opera house, but rather in the calmer and more sympathetic surroundings of the great houses of the noble patrons of music in Rome and elsewhere. At this time the performance of cantatas for solo voice or voices was a common form of domestic entertainment in which poets, composers and singers could display and refine their talents. Most cantatas were written for just one voice and continuo, but larger cantatas with instrumental accompaniment (up to the size of a miniature opera) were produced for special occasions. Handel wrote about a hundred such cantatas in Italy, and they cover the full range of the genre. Through them he gained the experience he needed and in doing so produced a stream of wonderful music to which he was to return many times in later years when in search of ideas for new compositions.

Many of Handel’s cantatas were written for the Marchese Ruspoli, his most important Roman patron. They were performed at meetings of the ‘Arcadian Academy’, a society of noblemen and artists dedicated to high standards of cultural attainment in Rome, especially in poetry and music. Ruspoli was a leading member of the group and presided when the meetings were held at his main residence (the Bonelli Palace) in Rome. Handel spent six months with Ruspoli in 1707 and returned in the spring of 1708 to produce his major work for Rome, the oratorio La Resurrezione. The early part of the summer was taken up with a visit to Naples and Handel then returned for a final stay at the Bonelli Palace in August and September. Ruspoli’s household accounts provide many details of payments to musicians and copyists. From these we learn that the two longest cantatas on this CD were composed during Handel’s last period with Ruspoli in 1708. Clori, mia bella Clori is not specifically mentioned in the accounts, but it is certainly a Roman work (a copy by Angelini, Handel’s chief copyist in Rome, is extant) and may possibly be the unnamed cantata performed at a conversazione on 26 June 1707, for which two violinists were engaged.

Though enhanced by its parts for violins, Clori, mia bella Clori is fairly typical of the simpler kind of solo cantata. The singer represents a young man reflecting on the absence (possibly the permanent loss) of his lover Chloris. His changes of mood are expressed in four arias. The third aria is perhaps the most beautiful: the sighs of the despairing lover are evoked by drooping figures on the violins answered by simple descending phrases in the bass. This aria later became the basis of a solo in the Chandos anthem The Lord is my light, and the opening aria (‘Chiari lumi’) was re-used in Rinaldo as ‘Di Sion nell’ alta sede’.

Amarilli vezzosa (which also has the title ‘Il duello amoroso’) was composed and performed near the end of August 1708. It is one of a number of cantatas which survive only in manuscripts in the Santini collection at Münster and which are still unpublished. The singers are soprano and alto (it is Handel’s only cantata for this combination) and the accompaniments are for a small group of first and second violins with continuo. The ‘amorous duel’ is an encounter between the shepherd Daliso (the alto) and the shepherdess Amaryllis: it seems she had once pledged her love to him but has now changed her mind. They meet in a wood. Daliso, resentful at being rejected, decides to use force to gain his desire. Amaryllis warns him that no lasting pleasure can be obtained from an act of violence. When Daliso ignores the warning and still seems determined on his object, Amaryllis produces a dagger and symbolically demands that he satisfies himself by plunging it into her heart. At this piece of melodrama Daliso’s will promptly collapses and he begs forgiveness. He gets none: Amaryllis mockingly hints that she would have relented if he had been a little bolder and, while Daliso rebukes her for her heartlessness, goes on to say that his love could never set her on fire.

Though neither character emerges very sympathetically, the music is always engaging. The opening sonata has a brilliant first movement which perhaps represents Daliso chasing Amaryllis through the wood. In the first aria, for Daliso, the main tune in minuet rhythm is extended by a leaping figure in the violins (hinting at the character’s impetuousness?), later taken up in the vocal line. The easygoing tune of Amaryllis’s first aria expresses her carefree confidence: Handel was especially fond of it and used it in several later works, notably Agrippina (‘Col peso del tuo amor’) and Flavio (‘Ricordati, mio ben’).

Amaryllis’s next aria is an exciting piece: the text speaks of a sailor ceasing to fear the waves of the sea, but the rushing semiquavers in both violins and voice seem to depict him being driven before the tempest. In the last aria Daliso’s hopelessness is conveyed in the broken-up melodic line of a sad siciliana, given extra pathos at the cadences by the use of the ‘Neapolitan sixth’ (A flat in the key of G minor), a favourite device in the music of Handel’s Italian period. The closing duet in A minor (later to be adapted by Handel in the finale of Poro) is a strict minuet, studiously neutral in tone.

O come chiare e belle is an ‘occasional’ piece directly connected with Ruspoli’s involvement in the War of the Spanish Succession. Pope Clement XI had accepted the Bourbon claimant, Philip V, as King of Spain, thereby rejecting the claim of the Habsburg Archduke Charles and drawing upon himself the wrath of Charles’s brother, the Emperor Joseph I of Austria. In June 1707 Imperial troops secured the kingdom of Naples for the Habsburg cause and, as Milan was already under Austrian rule, the Pope was put into a highly vulnerable position. In May 1708 Imperial troops occupied the Papal town of Comacchio on the Adriatic coast, threatening the annexation of nearby Ferrara and other Papal territories. The Pope protested without effect. By August he was left with no choice but to raise his own troops to defend Ferrara and, if possible, regain Comacchio. The ambitious Ruspoli promptly offered assistance by forming a regiment of 1200 men. Ferrara was duly defended (though Comacchio remained occupied until the end of the war) and Ruspoli received his hoped-for reward by gaining the title of Prince of Cerveteri in February 1709.

Handel’s cantata was performed on 9 September 1708 and celebrates the moment when Ruspoli offered to come to the Pope’s aid. There are three characters. The shepherd Olinto (soprano) represents Ruspoli himself (Olinto was his ‘Arcadian’ pseudonym); the river Tiber (alto) represents Rome, and the allegorical character of Glory (soprano) appears to inspire Rome to renew her ancient greatness. In the imagery of the text this renewal is to be accomplished under the guidance of a ‘clement star’ who is, of course, Pope Clement himself. There are probably several topical allusions which are now obscure, but it may be noted that the references to ‘alba’ (‘dawn’) also allude to Clement (whose family name was Albani) and the rivers Ister and Orontes represent the Austrian and Turkish Empires. (‘Ister’ is the classical name for the Danube; the Orontes was the chief river of Syria. Though Turkey was not directly involved in the war at this time she was a perennial enemy of the Papacy.) The mention of the ‘lance of Jupiter united with Mars’, coupled with the statement that Urania and Clio (the muses of astronomy and history) cannot lie, suggests that there was a conjunction of the two planets at this time, but there was none between July 1707 and September 1709.

The music is full of spirited invention. A brisk and brief opening sonata leads directly into Olinto’s first aria; the image of the waters of the Tiber shimmering in the light of the ‘clement star’ is evoked by delicate overlapping figures in the violins. The Tiber’s awakening (‘Chi mi chiama?’) is accompanied by a bass line in dotted rhythm which Handel later put to good use in Alcina, and the vigorous G minor aria that follows (‘Più non spera) was rightly rescued for Il Pastor Fido. Glory’s first utterance is, surprisingly, a slow aria with a highly embellished vocal line, gently rebuking Rome for its dejected state. Brilliance returns in ‘Tornami a vagheggiar’, which marks the first appearance of the radiant tune best known from the aria in Alcina beginning with the same words. (The ritornellos were used for the aria ‘E pur bello’ in Teseo.) Olinto’s next aria refers to the alarms of war arousing Rome’s ancient heroes, but to avoid anticipating his climax Handel declines to use the obvious imagery and sets it as a formal minuet. After Glory has ecstatically praised the ‘clement star’ Olinto declares he will change his shepherd’s pipes for the trumpet of war and, with splendid effect, Handel adds a real trumpet to the score for the final aria. A brief coro for the three singers concludes.

Cover artwork: Venus and Mercury by Nicolas Poussin (1594-1665)
Reproduced by kind permission of The Governors of Dulwich Picture Gallery, London