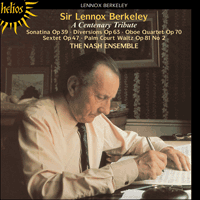 One of the comparatively few British composers to gain an international reputation, Lennox Berkeley was born in Boar’s Hill, Oxford, on May 12th 1903. His mother’s family was resident in France, so he spent much of his time there, becoming bilingual and absorbing many aspects of French civilisation. His first musical influences came from his father, a naval officer and passionate amateur of music, who would play through his extensive piano-roll collection to the delight of his young son. Even as a child, Lennox would improvise at the piano and, although without instruction, would compose little pieces. His formal musical education was sketchy throughout his schooldays in England and when he went up to Oxford University it was as a student of French language and literature, not of music.

However, in 1927 he was introduced to Ravel, through whose encouragement the young Berkeley returned to France to study in Paris with the celebrated teacher, Nadia Boulanger, and from that important meeting his whole career as a composer began to flourish. Thanks to his continuing friendship with Ravel, he made other equally influential and lasting associations: Poulenc became and remained until his death one of his dearest friends, and he was adopted into the dazzling circle of composers who found themselves in Paris at that time – Honegger, Roussel, and especially Stravinsky.

In 1935 Berkeley came back to London. The following year he attended the ISCM Festival in Barcelona to hear a performance of his Overture, Op 8. While there, he met another young composer, Benjamin Britten, whose Suite Op 6 for violin and piano was also being performed, and the two struck up a lifelong friendship, one of the fruits of which was the orchestral suite of Catalan dances, Mont Juic, written by the two in collaboration. During the years leading up to the Second World War, Lennox Berkeley’s reputation grew steadily, as did his output. In 1942 he joined the music staff of the BBC as an orchestral planner, a post to which he brought great flair and skill, and in which he continued for the next three years. On leaving the BBC he became Professor of Music at the Royal Academy of Music in London and was also awarded the Collard Fellowship.

The affection and high regard which this modest man engendered was happily reflected in the awards and honours which he received. In addition to his knighthood he also held a Papal Knighthood of the Order of St Gregory, was President of the Performing Right Society and President of the Cheltenham Festival. He invested all his public duties with his own unique warmth, and typically continued to teach aspiring young composers with a patience and professionalism which had been unfortunately denied him in his own youth.

Essentially a private person, Berkeley led an unusually serene home life in his charming house in the Little Venice area of London, due in no small part to the delightful personality of his wife, Freda, whom he met while at the BBC. Their three sons, unsurprisingly, inherited the musical leanings of their parents, and Michael, the eldest, has won recognition as a composer in his own right.