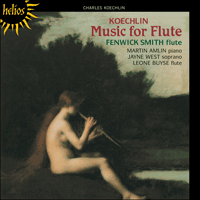 The French flutist Jan Merry, in a letter to Charles Koechlin’s widow shortly after the composer’s death in 1950, eloquently described the appeal of his writing for the flute: ‘This restrained emotion, always dignified, very French; without exaggeration, without affectation—how directly it goes to the heart and to the hearts of those who listen!’ Of the works included on the present recording, perhaps the Fourteen Pieces, Op 157b, best exemplify these qualities. They testify also to Koechlin’s skill as a miniaturist: each of these brief pieces establishes its particular character and mood with great economy of means. They were composed originally for unaccompanied flute as Op 157; Koechlin added a piano part later. A partial first performance was given in 1941 by Jan Merry and the composer. Op 157b is dedicated to the flutist Paul Dommel and his wife, Amy Dommel-Diéry, a pianist. They were, like Jan Merry, devoted friends of Koechlin and his music.

My first exposure to Koechlin’s music came when I was a student of Joseph Mariano at the Eastman School of Music. Mariano frequently read duos with his students, and along with the inevitable Kuhlau duets, Koechlin’s sonata for two flutes was among his favorites. The serenity of the opening and closing pages is enhanced by the liberal use of octaves and perfect fourths and fifths—a rigorous test of good intonation: and the sinuous intertwining of the two lines invites and rewards attention to the subtleties of balance, blend, color, and expression. So I am particularly happy to be joined in this recording by my colleague in the Boston Symphony Orchestra and fellow Mariano student, Leone Buyse.

Opus 52 is Koechlin’s most extended and ambitious work for the flute. His designation ‘Sonata for piano and flute’ acknowledges the substantial role of the piano—much of the first movement requires three staves for Koechlin’s far-reaching chordal progressions. He perhaps felt that his writing taxed the expressive and coloristic resources of the piano, for he briefly contemplated an arrangement of Op 52 for flute and orchestra. In the first two movements, Jan Merry’s ‘restrained emotion’ prevails—each rises only briefly to mezzoforte, and numerous performance indications encourage both players to a maximum of expressive variety within a prevailingly soft dynamic range. The improvisatory yet shapely melodic line, and the luminous harmonies with which the piano supports them, combine in a voice distinctively Koechlin’s own. In the Finale, restraint yields to an exuberant contrapuntal romp which grows out of the interval of a falling fourth. After an interlude recalling the mood of the first movements, the triplet motion steals back in, building this time to a brilliant conclusion. Koechlin dedicated the sonata to the pianist Jeanne Herscher-Clément, who premiered the work with Adolphe Hennebains, professor at the Paris Conservatory. It is recorded here for the first time, as are Opp 139, 149, and 218.

The breadth of Koechlin’s musical culture was all-encompassing: his sources range from Gregorian chant through the new Viennese school. Like Stravinsky, he wrote in various and apparently incompatible styles, but always made them identifiably his own. The sources of his extra-musical inspiration were similarly varied. They ranged from Classical mythology to Rudyard Kipling’s Jungle Book and the ‘insolent beauty’ of the great female stars of the early sound film, in particular the London-born film idol Lilian Harvey (1907–1968). Koechlin’s fascination with Miss Harvey resulted in four series of pieces written in her honor: the Seven Songs for Gladys Op 151, no fewer than 89 cameos for solo piano, and the two Albums de Lilian Opp 139 and 149. Lilian, unfortunately, was quite uninterested in Koechlin’s efforts. His letters to her went largely unanswered, and even after a visit from Koechlin’s wife, Suzanne, Lilian did not acknowledge receipt of the music she had inspired.

The first and last of the nine vignettes in Op 139 are songs after the manner of a popular chanson. In the first, ‘Keep that schoolgirl complexion’, Koechlin speculates on Lilian’s beauty secret: at first blush the song looks to be a Palmolive testimonial; but it also celebrates her passport to stardom—the flawless beauty of her face.

The second and third movements are Satie-esque miniatures for solo piano inspired by particular scenes from Miss Harvey’s films. The ‘Fugue sans protocole’ demonstrates Koechlin’s fluent counterpoint with easy informality; the ‘Valse de la réconciliation’ passes its melodic line through unexpected keys to lovely effect. In ‘Les yeux clairs’ (‘Bright Eyes’), serene harmonies in the piano are joined by broadly arching lines in the flute to evoke the remote beauty of a film idol’s gaze. ‘Joie de plein air’ (‘Joy of the Outdoors’) brings a welcome gust of fresh air through what has been a prevailingly sultry atmosphere. Lilian Harvey was an accomplished athlete, and this non-stop toccata for solo piano gives clearly physical expression to her joy in the out-of-doors. Koechlin’s title ‘Skating-smiling’ has an exotic ring in the French ear that it conspicuously lacks in English—perhaps it is better rendered in English as ‘Patinant-souriant’. The wordless vocalise leaves us to wonder what happy thoughts the star is thinking as she skates a slow waltz, first answered, then accompanied by the flute. ‘En route vers le bonheur’ (‘On the way to Happiness’) is the most extended of the nine pieces. The flute sets out, soon joined by the piano, on an energetic excursion in jaunty triplet rhythm. Flute and vocalise intertwine in a more tranquil middle section, until the triplets return, building this time to an exultant climax. The energy dissipates, and we arrive at happiness in a radiant B major. However ‘Pleurs’ (‘Tears’) intervene: the piano introduces and briefly develops a resigned little tune, only to interrupt with a middle section of surprising violence. The piano’s angular, hyperchromatic sequences and the shrieking piccolo seem to have paid an unexpected visit from the world of Pierrot Lunaire. The outburst passes as suddenly as it came. The somber moods returns, until a soft glissando in the piano returns us magically to B major, and ‘Tout va bien’ (‘All is well’). In this last song Koechlin reveals, with gentle irony, that the serene world we have glimpsed is illusory. It exists only on the silver screen and in our imagination—yet because it has been caught on film, the illusion will last for ever.

The peculiar array of instruments called for in the second Album de Lilian doubtless contributed to the 51-year delay before its first complete performance, in a recital I presented in Boston in 1986. The series consists of intermingled movements for piano solo, for flute and piano, and for the otherworldly combination of ondes martenot and harpsichord. Eschig’s catalogue of Koechlin’s works, overseen by someone more practical-minded—if less imaginative—than Koechlin, groups the pieces for flute and piano recorded here, and for piano solo, in independent suites. Perhaps if interest in Koechlin’s music continues to increase, the remainder of Op 149 will not have to wait another 51 years for its first recording.

The Sérénade à l’étoile errante (‘Serenade for the wandering [Film] Star’) appears at first to be a solo piano piece, but the flute soon steals in, imperceptibly at first, and then joins the piano in a leisurely exploration of Koechlin’s unique sound-world. Scenes in several of her movies display Lilian Harvey’s prowess as a swimmer. If the length of the lines Koechlin writes for the flute in ‘Swimming’ are any indication, she must also have had remarkable breath control. Like ‘Pleurs’ in the first Album, the angular but lucid music depicting ‘Les jeux du clown’ (‘The Clown’s Tricks’) owes more to Schoenberg than to anyone French. The flute offers a few mild interjections which ultimately fail to divert the clown from his mischief. The last of the four pieces, ‘Le voyage chimérique’ (‘The Dream Voyage’), sketches an imaginary trip to Hollywood. (As Lilian made at least three films in the United States in the early 1930s the dream may well have been Koechlin’s own.) The score is dotted with indications of our progress: starting in ‘the mists of sleep’ a train emerges from obscurity, flies over rooftops, and plunges into the ocean (the Atlantic, presumably) which it crosses underwater. The next indication on the rather condensed itinerary is that we are crossing Arizona; excitement mounts and the tempo presses ahead as we reach California. The arrival in Hollywood is marked by a grandiose paraphrase of The Star-Spangled Banner which would doubtless have Charles Ives sitting up in his grave, saluting. With a sudden deep tolling in the piano the adventure is past, wakefulness intervenes, and with a wistful piccolo melody, the dream evaporates into stillness.

In the Morceau de lecture, or sight-reading exercise, Koechlin combines rhythmic freedom with his customary metrical freedom to create a rhapsodic, improvisatory, wide-ranging line for the flute. The piece also compresses a remarkable intensity of expression into its brief length before sinking to a somber but tranquil close.

Koechlin was a complex, fascinating, and independent spirit. While he might, with disarming naivety, entrust his listeners with his most private dreams and fantasies, his knowledge of the other arts was sophisticated and comprehensive. His firm belief in his creative imagination led to a large and astonishingly varied output, much of which remains to be performed and evaluated before his place in our musical heritage becomes clear.